While Microsoft doesn't officially talk about how many Windows Phone devices have been sold, there has been evidence that Windows Phone-based products are starting to gain steam in the smartphone marketplace. The increase in sales seems to have come mostly at the expense of Research in Motion and its Blackberry OS, which has seen a big dip in sales in the last few quarters. 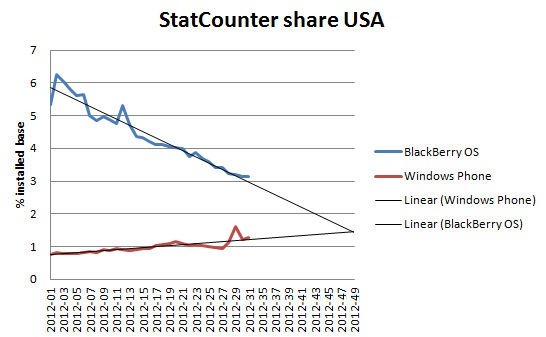 Now WMPoweruser.com has extrapolated how both these trends could show Windows Phone overtaking Blackberry later this fall. Using web user data from StatCounter, the site predicts that usage of Windows Phone products will be ahead of Blackberry, at least in the US smartphone market, sometime in November.

This would seem to be a pretty safe bet, since Microsoft and its hardware partners such as Nokia, Samsung and HTC are supposed to launch new Windows Phone 8 devices later this fall. However, RIM won't be doing the same. It recently revealed that its Blackberry 10 OS, and its corresponding smartphones, would not launch until sometime in the first quarter of 2013.

Add all that up and it looks like Windows Phone will indeed be making some small, but important, gains in the crowded smartphone race later this year. The big question: Will it also take market share away from iOS and Android?