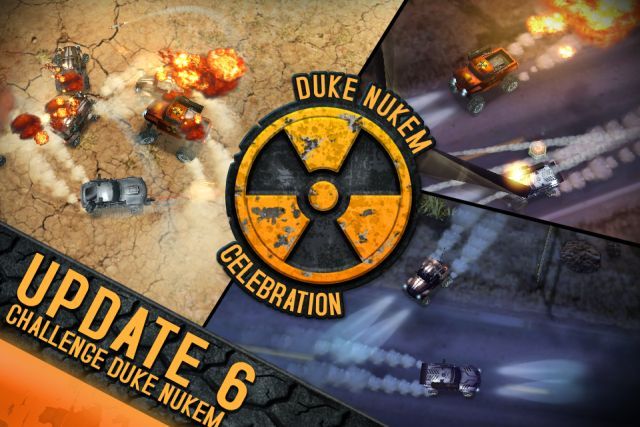 A new update to the popular iOS game Death Rally is letting its player challenge none other than the Main Man Duke Nukem. The game's official blog web site has announced that the sixth update to Death Rally not only features Duke's 4x4 monster truck as seen in the recently released first person shooter Duke Nukem Forever but also a new survival arena, Duke Match. Duke Nukem himself has been a part of Death Rally since the iOS version was first released last March.

The game for iPhone, iPod Touch and iPad, was developed by Remedy. The original version of the car combat game was released in 1996 for the PC via Apogee, the same company that released the first three Duke Nukem games (the third game, Duke Nukem 3D, was released by Apogee's 3D Realms division). The original game has since been released as freeware by Remedy in 2009. In March 2011, Remedy, working with developer Mountain Sheep, released the first version of the iOS port of Death Rally which also got an enhanced version just for the iPad 2. At the moment you can get the game from the App Store for just 99 cents.

Remedy has a long history with Apogee and 3D Realms. In addition to Death Rally, the two developers worked together on the first two games in Remedy's Max Payne series. The franchise was later sold off to publisher Take Two Interactive. Remedy later developed the Xbox 360 exclusive action-adventure game Alan Wake which was released in May 2010. 3D Realms later shut down its development studio in the middle of making Duke Nukem Forever. The game was finally released last June by Gearbox Software and other developers.