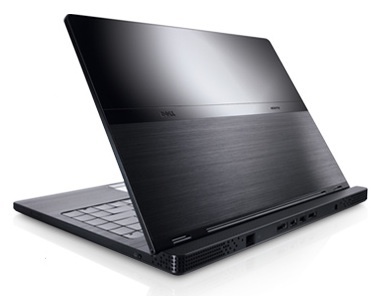 Adamo, Dell's superthin answer to the MacBook Air, has been scrapped in favour of a new design to be incorporated into its existing product lines, CNET has learned. The Adamo experienced a shaky start when it launched with a $2,000 price tag, but surprisingly the MacBook Air was immune to the problem.

Dell went to great lengths to ensure the Adamo lived up to the expectations of the fashion-conscious consumer. Instead of the traditional hideous stickers that sit on the palm rest of most laptops, a subtle engraving of the Dell, Intel and Microsoft logos was made underneath the laptop, with a magnetic latch hiding the obligatory Windows licensing sticker.

Upon release in March 2009, Dell hailed the Adamo 13 as being "the world's thinnest laptop" at a miniscule 0.65" thick. In September the same year, Dell released the Adamo XPS at an even smaller 0.39" thick. The Adamo site reflected Dell's focus on aesthetics, eschewing the typical focus on specs and stats for an artistic presentation that highlighted the Adamo's design.

Industry sources claim the Adamo's recent price cuts to $799 were an effort to clear out the remaining stock before today's cut. Dell's efforts will be repositioned into their current product lines, such as Inspiron and Alienware, where Dell hopes their new designs will make more of an impact than in the ill-fated Adamo line.