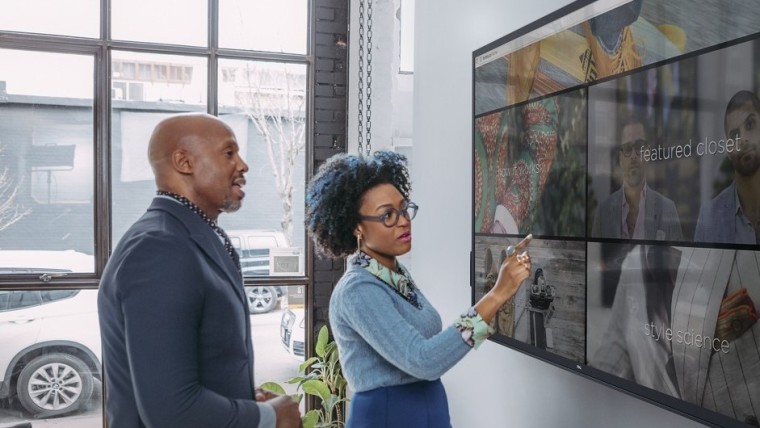 CES 2020 is just around the corner and as is expected, companies have begun announcing their product lineup for the year just before the show. As for PC OEMs, Dell unveiled its redesigned XPS 13 laptop, the 5G capable Latitude 9000 series convertible, and improvements to its Dell Mobile Connect PC app bringing iOS screen mirroring capabilities. In addition to these announcements, the company also unveiled a range of new monitors.

One of those monitors is the new Dell 86 4K Interactive Touch Monitor (C8621QT), a large screen 84-inch touchscreen display for collaboration in the workplace. The display, at 85.6 inches, is larger than that of the 85-inch version of Microsoft’s Surface Hub 2S. However, unlike the Surface Hub 2S, this device is not a standalone computer. For those that want to convert the display into a standalone computer, the device comes with the option to mount a Dell OptiPlex Micro PC in the back panel.

In terms of collaboration, the 4K UHD monitor boasts of a 20-point multi-touch capability and comes with a stylus that houses an eraser. Interestingly, the stylus can also be magnetically attached to the side of the display just like that on the Surface Hub. As for ports, the device comes with one DisplayPort, four HDMI ports for increased versatility, four USB-A ports, one USB Type-C port with DP Alt mode and power delivery of up to 90 Watts. The device also comes with an RS232 connector and an ethernet port.

The display also comes with Dell’s Screen Drop feature where the contents on the screen lower in height to make it reachable for people who are shorter or for differently-abled users. This accessibility feature can be accessed right from a button placed on the side of the screen.

The company notes that the Dell 86 4K Interactive Touch Monitor (C8621QT) will be available to customers worldwide starting from April 10, 2020. However, prices for the device have not been announced yet.

In addition to the 86-inch display, Dell also unveiled new UltraSharp series monitors, including the refreshed 43-inch 4K USB Type-C monitor (U4320Q). The 43-inch display comes with a USB Type-C port with DP Alt mode support and 90W power delivery, the capability to work with up to four PCs simultaneously and a height-adjustable stand to make it easier to use in places of a multi-monitor setup. The firm also announced new P series and E series monitors that are more affordable across a variety of screen sizes.