Dell announced a refresh of its XPS 13 lineup in August, with Intel's new Comet Lake processors. Not much has changed since the one I reviewed earlier this year, but the performance boost is impressive.

Intel's new 10th-generation lineup is a confusing one, because there are two different product families. Ice Lake is the new 10nm product family of chips that include Iris Plus graphics. The first PC to use them was the Dell XPS 13 2-in-1, but while the clamshell XPS 13 also comes with 10th-gen processors, it uses Comet Lake.

Comet Lake is still 14nm, and it still doesn't include Iris Plus graphics. It's more of a direct successor to last year's eighth-generation 'Whiskey Lake' family. What's particularly interesting is that there's a SKU of the Core i7 that has six cores, making it the first hexa-core U-series processor.

But if you don't care about any of that, the good news is that the XPS 13 keeps all of the things about it that are pretty much universally beloved. It has an edge-to-edge display, giving it a tiny footprint for a 13-inch laptop, it weighs in at only 2.7 pounds, and more.

Obviously, there are plenty of options on this laptop. Keep in mind that if you want hexa-core, you'll need the Core i7-10710U, not the quad-core Core i7-10510U.

As far as the design goes, nothing has changed. In fact, it's been a while since Dell significantly overhauled the design of the XPS 13, and that's fine, as it's a winning formula. The one I received earlier this year was Frost-colored, with the white carbon fiber weave interior. This model is silver with a black interior, which is the more traditional XPS look. 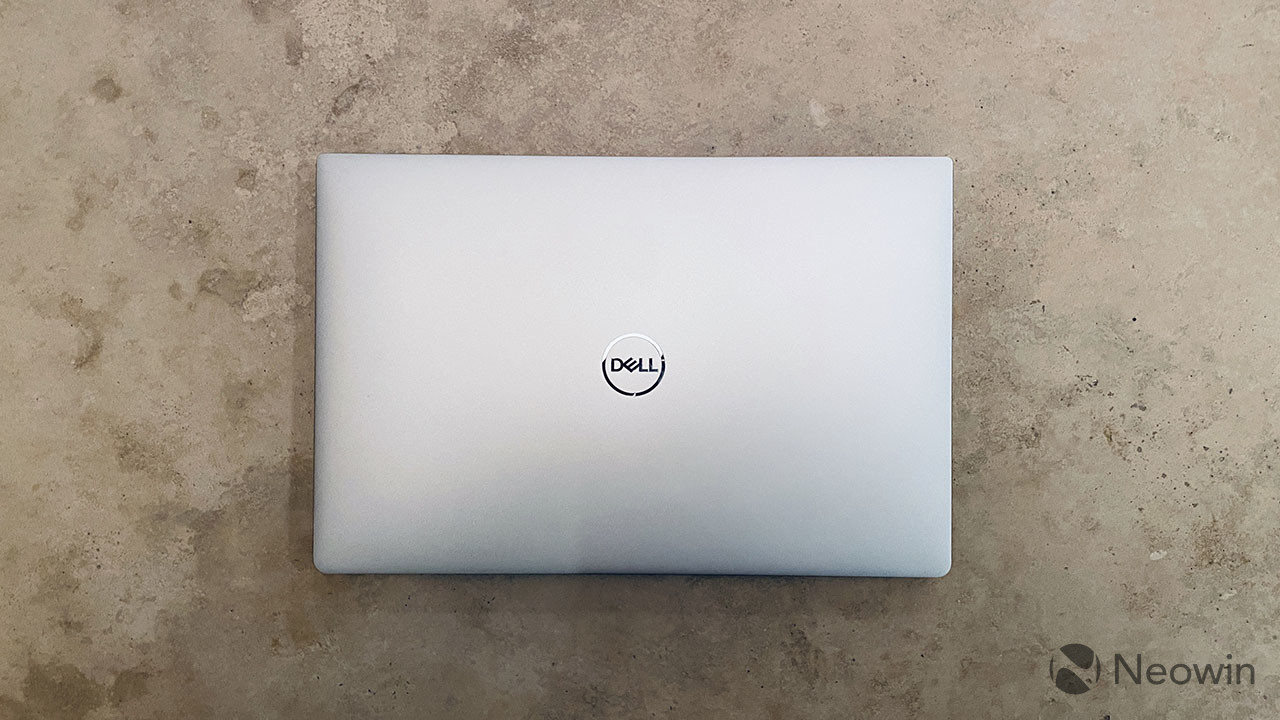 It's made out of a single block of CNC machined aluminum, and as always, the build feels solid, even at just 2.7 pounds. Note that if you opt for a non-touch model, it will be even lighter at 2.6 pounds. What's really remarkable is the size though, as the XPS 13 has one of the smallest footprints of any 13-inch laptop. This is an ultra-portable machine, light enough to carry and fitting in small spaces.

The aluminum lid is stamped with a chrome Dell logo, which is probably the sexiest part of the design, at least for this color. I'll be honest; the traditional silver and black XPS look isn't my favorite, and I'll take the Frost with white interior any day of the week. 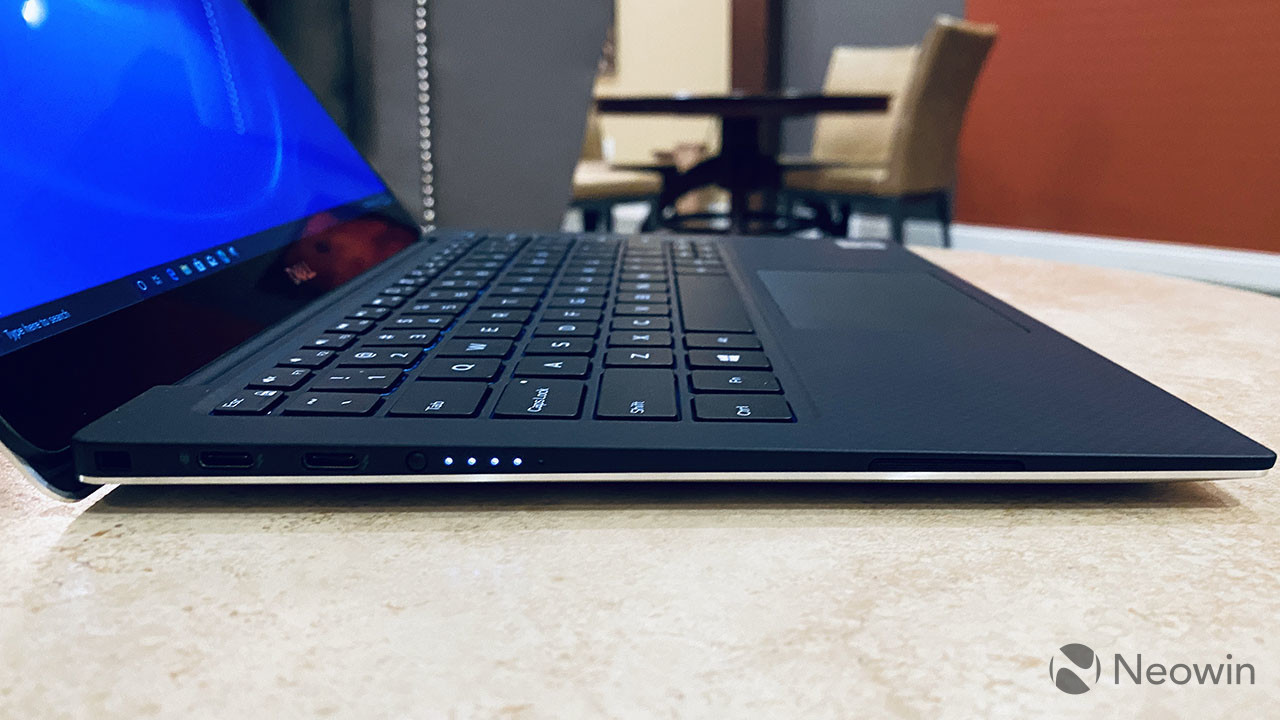 On the left side of the device, there are two Thunderbolt 3 ports, each with four lanes, meaning that they're full Thunderbolt 3 ports. They support data transfer speeds of up to 40Gbps, and theoretically, you can power two 4K displays off of each one, not that Intel UHD Graphics will really provide a great experience on four 4K displays, plus the one on the laptop itself.

There's also a battery indicator next to the two ports, which I've always thought was a pretty cool feature. You just press the button on the side and any number of the five LED lights will light up to tell you how much battery life is remaining. One thing that always disappoints me about it, however, is that the battery indicator doesn't automatically turn on while charging, something I would think would be common sense. The only charging indicator is a white light on the front of the device, which does not change color when it's fully charged. 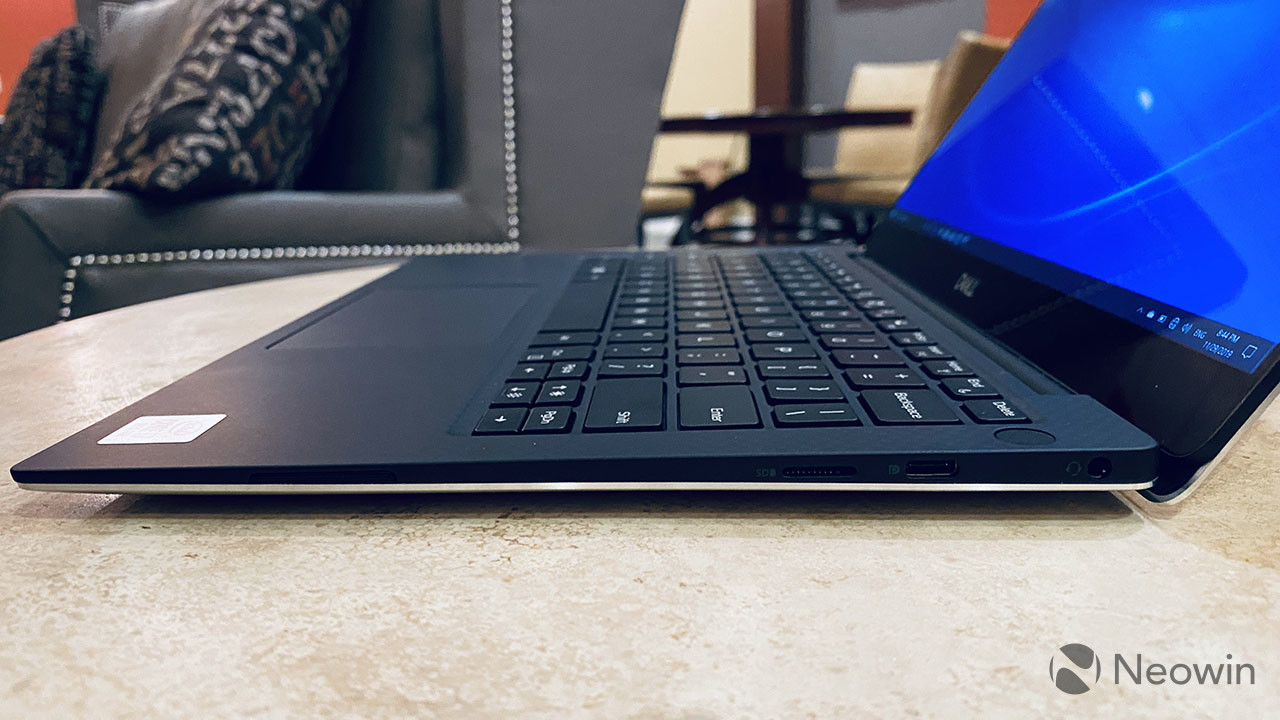 On the right side, there's another USB Type-C port, although this one is USB 3.1 Gen 1, which means it supports 5Gbps data transfer speeds. It's nice that Dell thought to put the USB 3.1 port on the opposite side from the Thunderbolt 3 ports. This makes it less confusing, and it also means that you can charge from either side of the laptop. Also on the right side are the 3.5mm audio jack, and a microSD card slot.

The model that was introduced earlier this year was something of a redesign, and it was the first one that got rid of USB Type-A. You'll want to get used to using Bluetooth and USB Type-C peripherals. 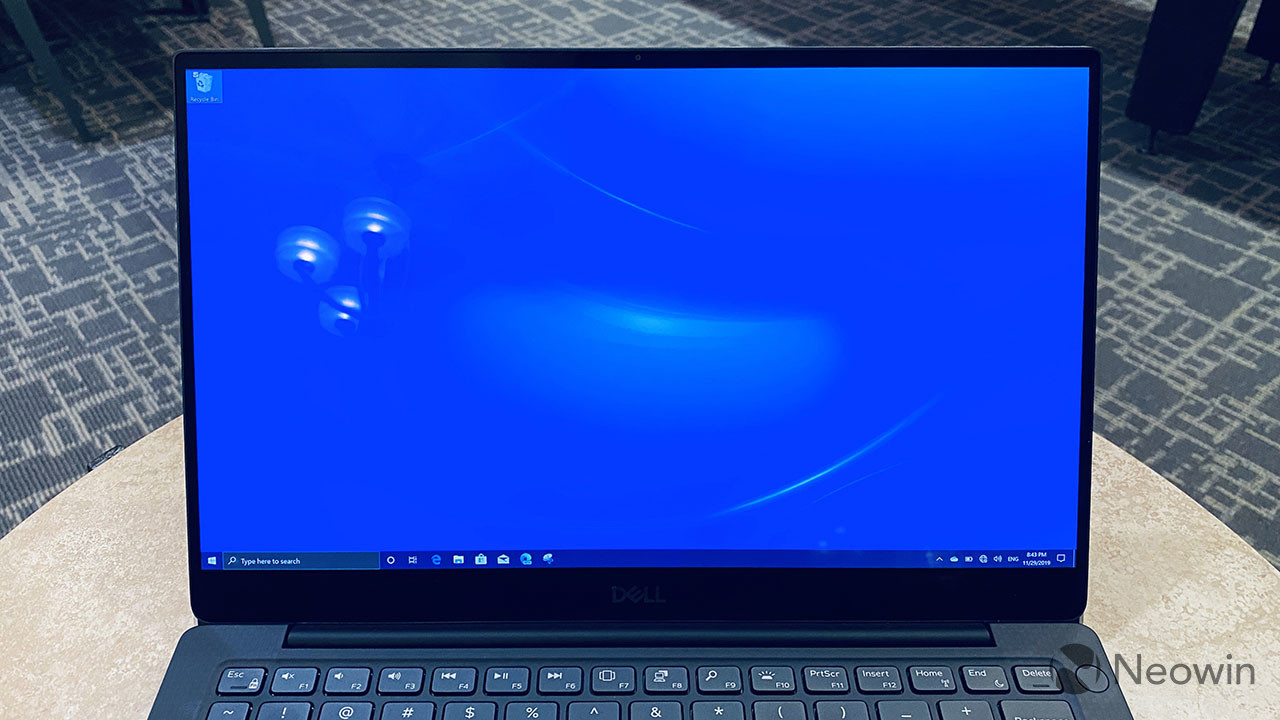 To put things more into perspective, this year's XPS 15 came with an option for an OLED screen. But being that Dell uses such high-quality LCD panels, there wasn't even that much of a difference. Not only are the colors vibrant, but the viewing angle is as good as it gets. You can look at this screen at a full 89 degrees from any angle and you won't notice any distortion. This is about as good of a screen as you'll get on a 13-inch laptop. 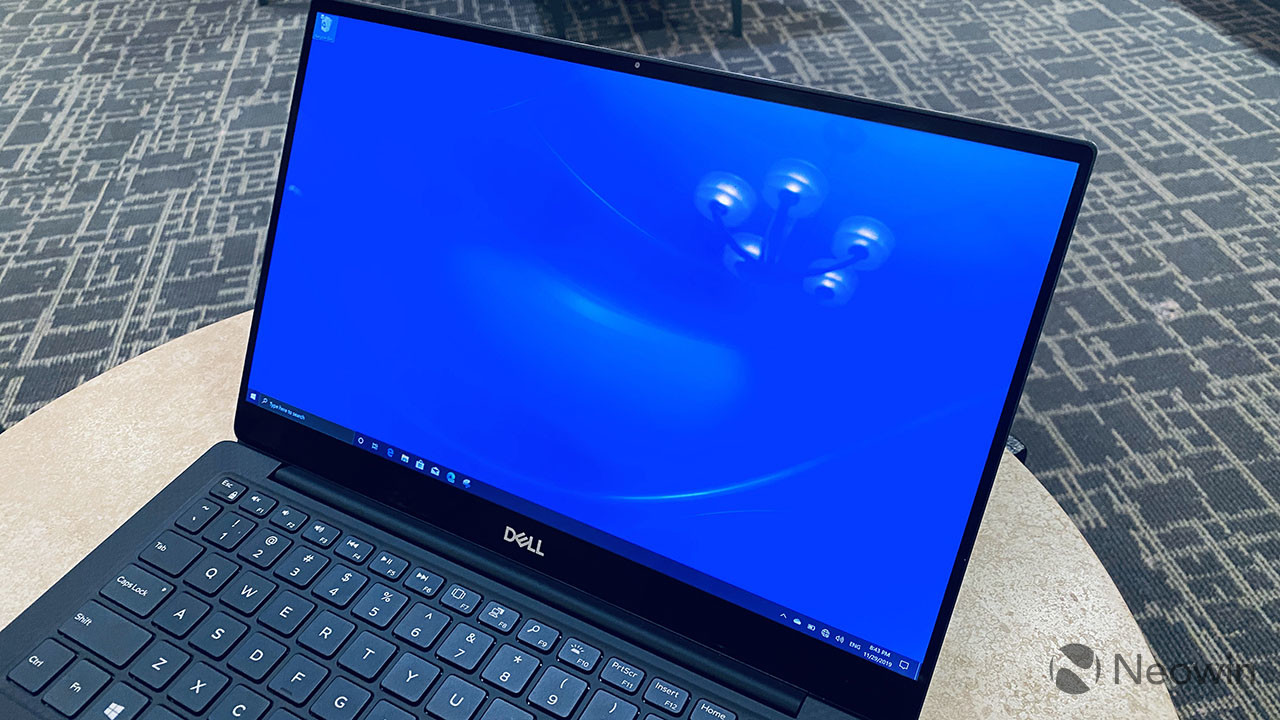 And of course, as with all XPS PCs, there are tiny bezels. That's what allows it to fit into such a tiny footprint. Another change that was made earlier this year was that Dell finally moved the webcam to the top of the screen, rather than the bottom (the nostril cam). It's a shrunken down module, so it didn't have to compromise on the bezel size, at least not by much. 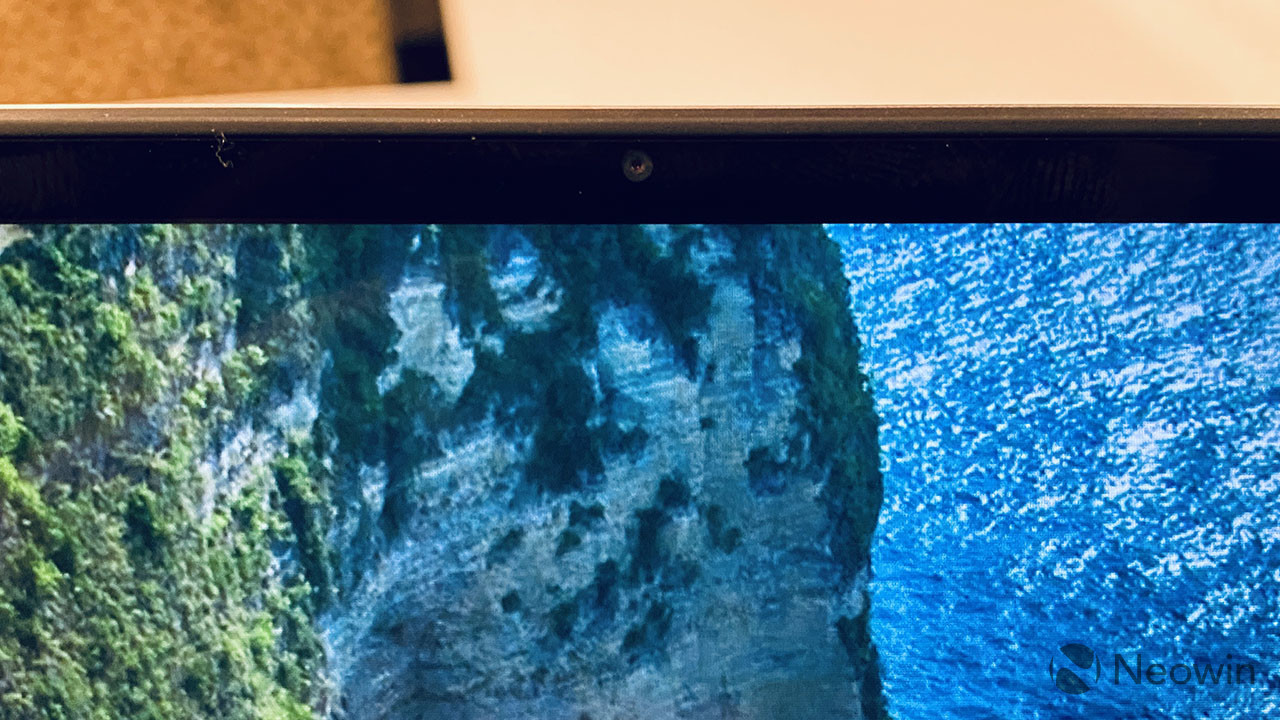 Unfortunately, that means that there's no IR camera. Oddly, Dell introduced an IR camera in last year's model, just to kill off the feature this year.

Back to the screen itself, Dell has something called Dell Cinema, which consists of three things: CinemaColor, CinemaSound, and CinemaStream. CinemaColor offers Dolby Vision content up to 40 times brighter with blacks up to 10 times darker.

CinemaSound uses Waves MaxxAudio Pro for volume and clarity. As usual, the speakers sound great, and any XPS machine is an excellent PC for streaming media. There's an immersive display, clear sound, and the one thing that I didn't mention is that CinemaStream uses Killer Wireless to prioritize streaming network traffic, similar to what a gaming PC would do for games.

The Dell XPS 13 uses a standard, chiclet-style keyboard, and it's backlit; it's the same style that we're used to from XPS laptops. The key travel is 1.3mm, which is pretty standard these days. In previous years, I'd have said the standard is 1.5mm, but shallower keyboards are becoming more and more common. 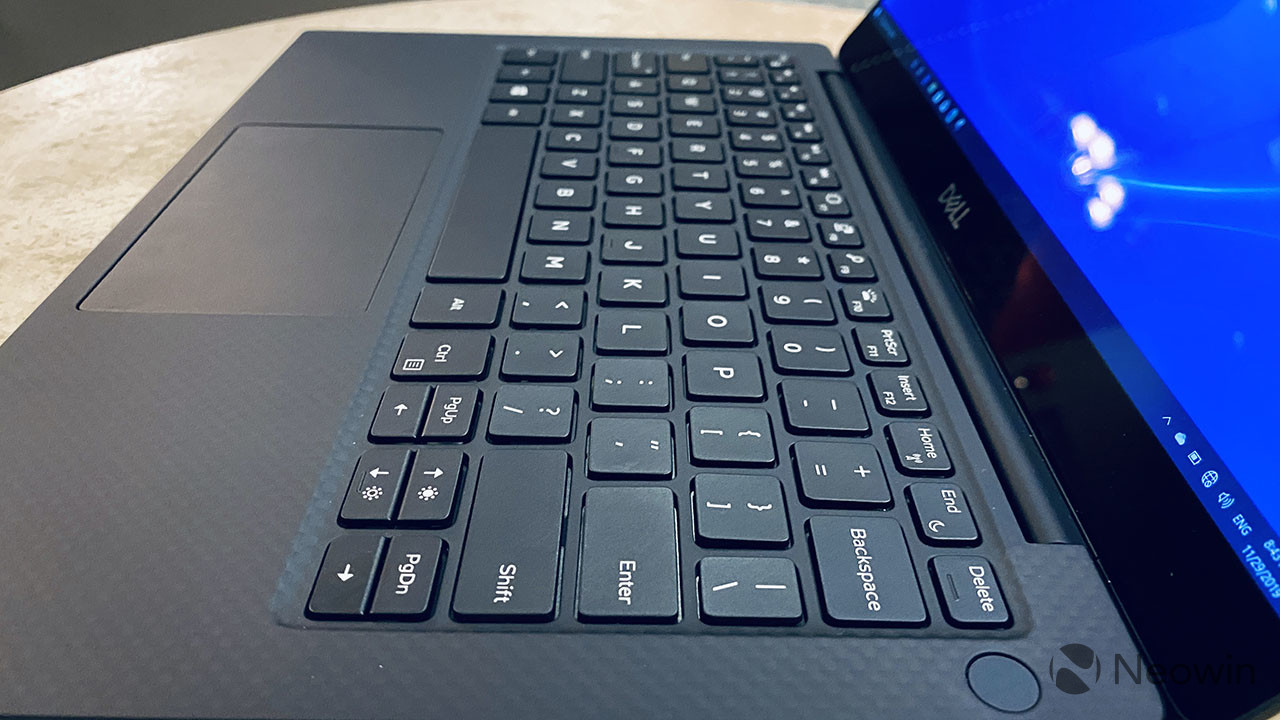 The keyboard is comfortable to use, and it's accurate. Just like earlier this year, there's nothing about it that really stands out to me, like how HP's EliteBooks or Lenovo's ThinkPads have magnificent keyboards. This keyboard feels pretty standard. It's good, but it's not really setting new bars for the competition. 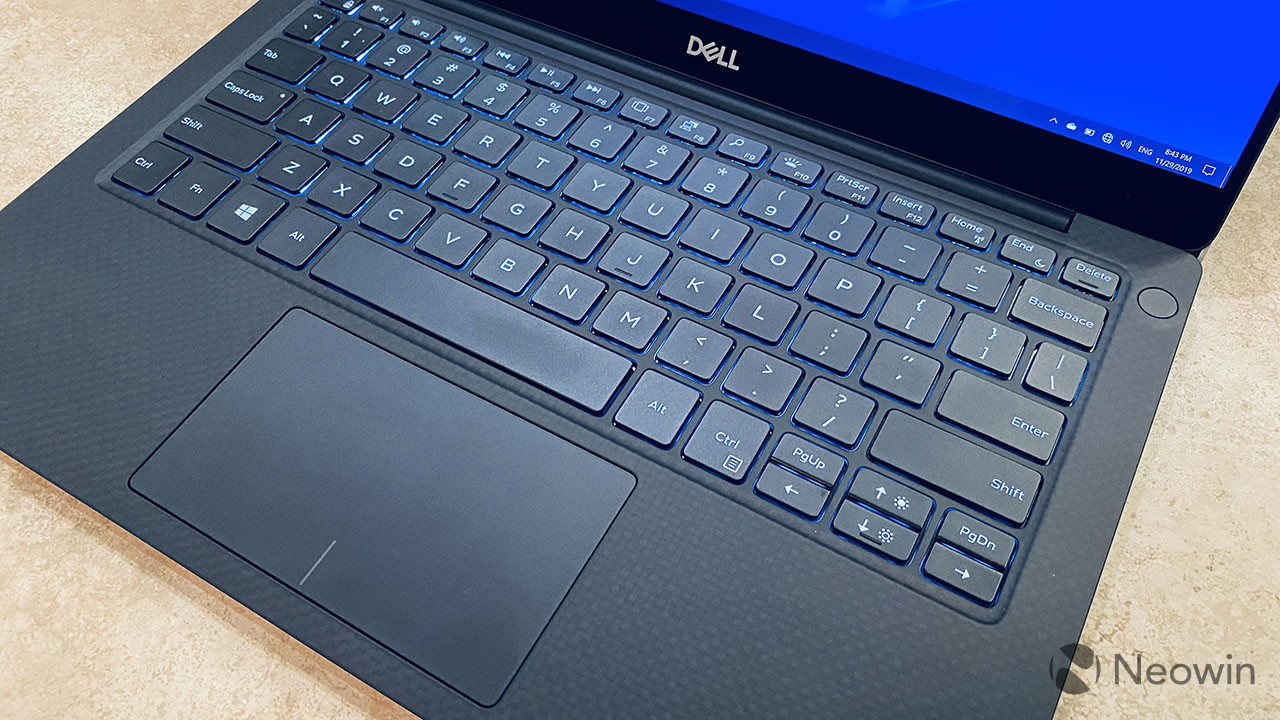 My only complaint would be that the keys are a bit loud. One thing that I'm noticing from a lot of OEMs, such as Google and HP, is that they're working on innovations for quieter keyboards.

Honestly, I'd love to see Dell bring the second-generation MagLev keyboard from the XPS 13 2-in-1 to the XPS 13. That thing was great, and it would allow the company to save some space and make a narrower chassis. 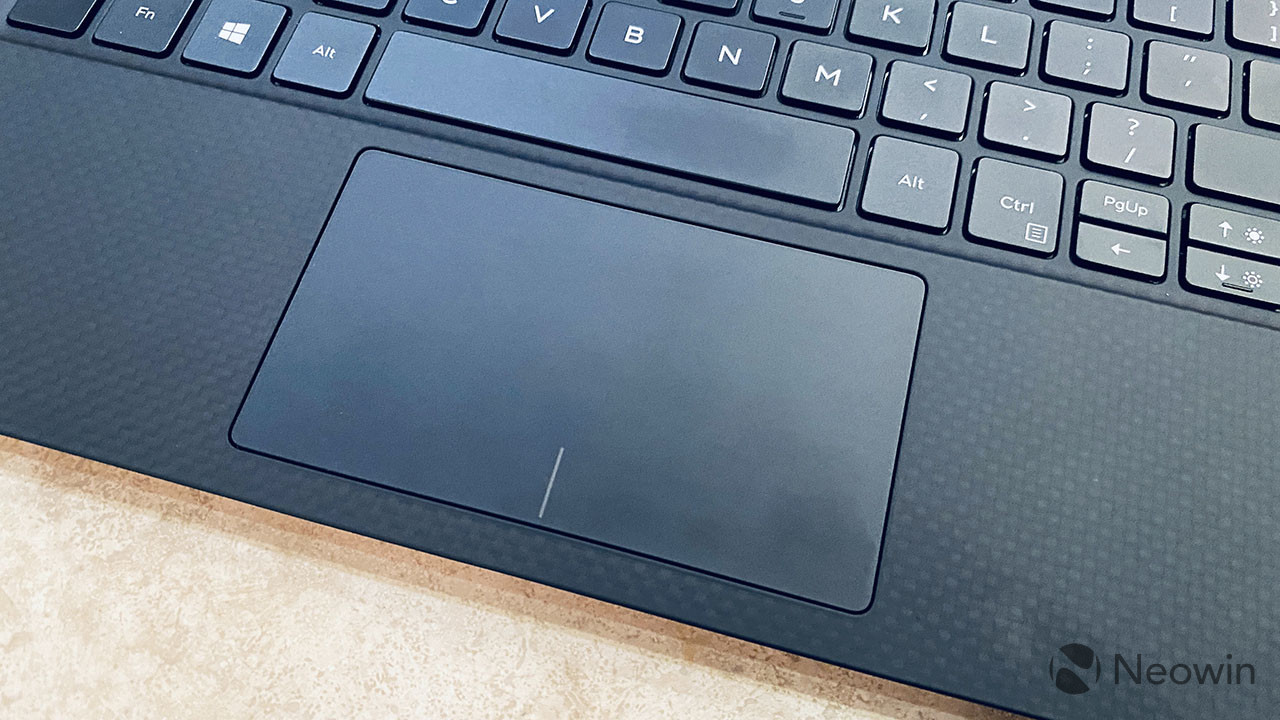 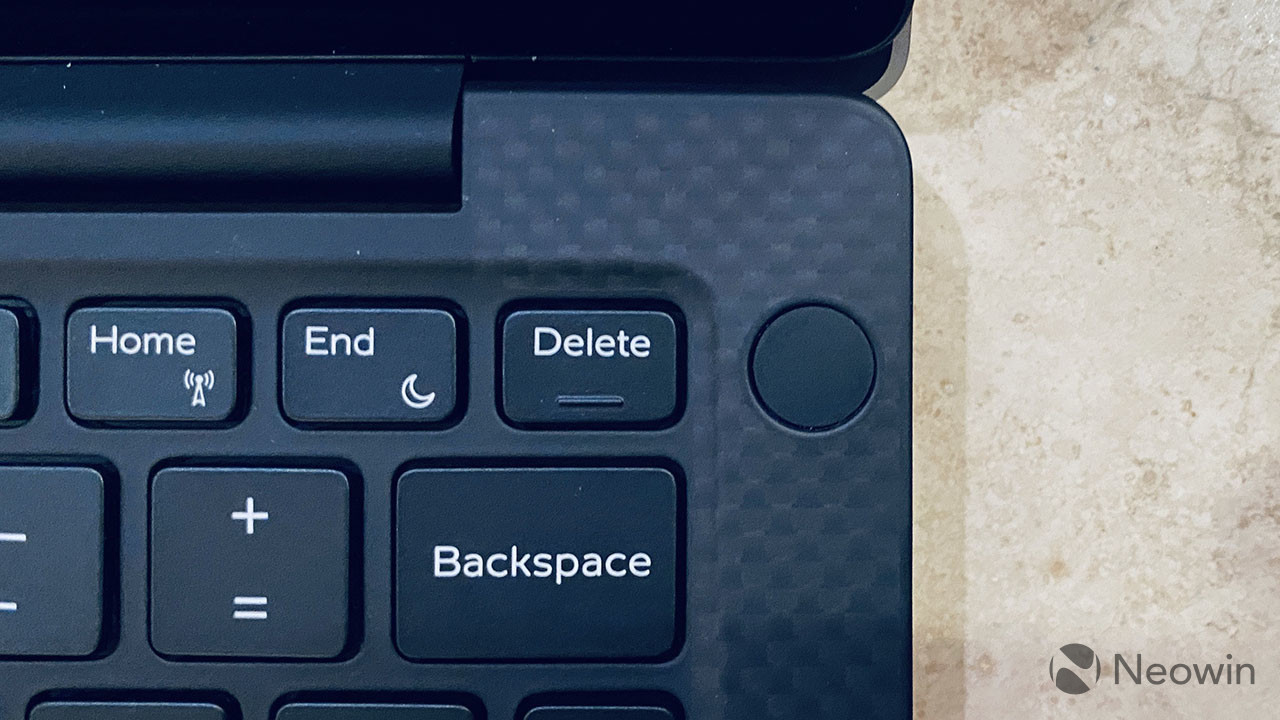 Dell considers this to be a security risk. The idea is that if it takes a certain amount of time for the PC to boot up, you may have walked away. Personally, I'd rather it log me in automatically. By this logic, the PC should lock itself if I haven't used it for 10 seconds, and that's insane.

The Dell XPS 13 includes Intel's new Comet Lake processors, and it's important to understand the distinction between Comet Lake and Ice Lake, because they're both 10th-generation, both U-series, both 15W, and most importantly, both found in ultrabooks. Intel says that Comet Lake is meant for productivity use cases, and as I mentioned earlier, it's more of a successor to Whiskey Lake, built on a 14nm architecture.

Ice Lake is 10nm, something that Intel has been promising to deliver for years and only successfully produced in 2019. The Ice Lake lineup uses Iris Plus graphics, so these are meant for more graphics-intensive workloads. If you ask Intel which one is better, the official answer is that it depends on your use case. 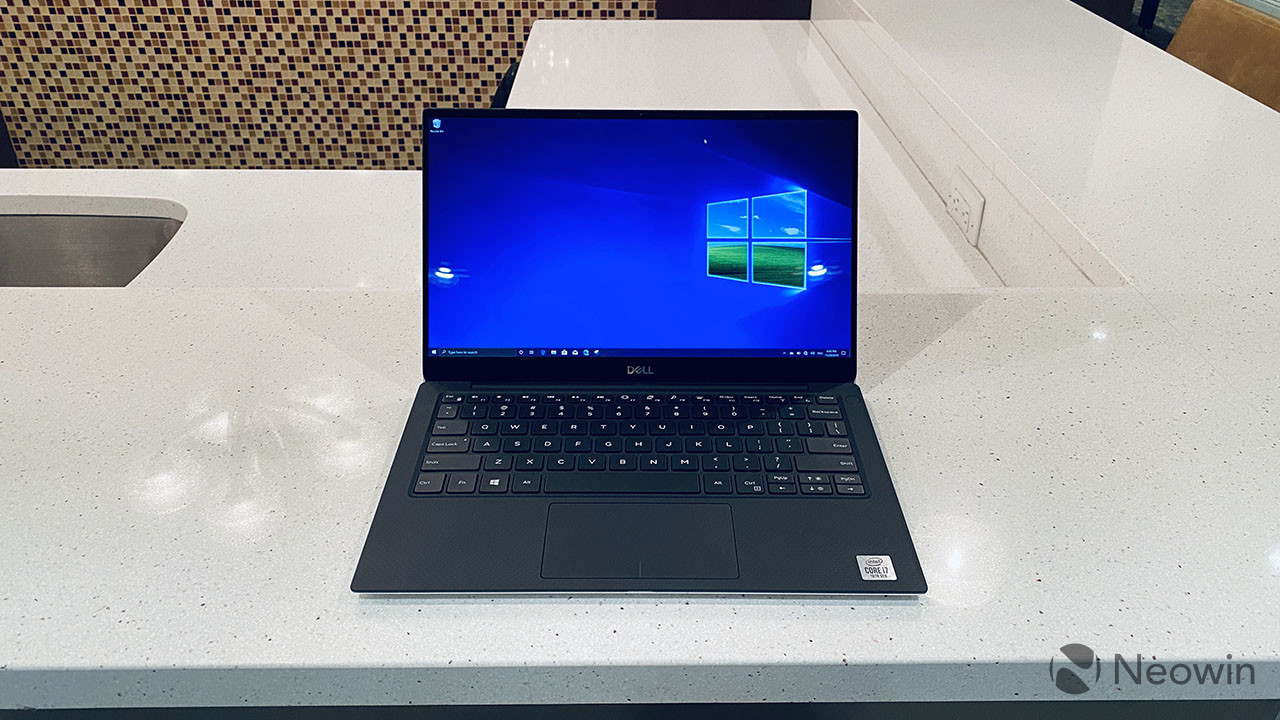 The big thing that's new with Comet Lake though, is that there's a hexa-core model of the Core i7; more specifically, the Core i7-10710U. More cores means more threads (12 in this case), which means better multitasking. It means better performance for virtual machines as well, whereas just a couple of years ago, all U-series processors were dual-core. With a hexa-core CPU, you can actually dedicate several entire cores to a VM, rather than a thread or two.

As far as regular, everyday performance goes, it's an incremental upgrade over Whiskey Lake, as you could probably expect it to be. More cores doesn't always mean better performance; it depends on your workload. You have to be doing something that actually makes use of those extra cores, which really isn't hard to do.

Battery life is about the same as it was when I reviewed the model from earlier this year, which is what I described as a "mixed bag". There will be times when you can get over eight hours of use, which is phenomenal for a Windows PC, and other times when you'll get around three hours. It all depends on how you use it.

Ultimately, the performance is going to be fine, no matter which one you choose. This is a productivity machine, and you'll be able to be productive. I think, however, that a deciding factor could be if you know you could really make use of those two additional cores.

As always, the Dell XPS 13 is an excellent machine. It has a solid build, a beautiful display, a good keyboard, and it comes in a tiny footprint. The narrow bezels make for an immersive experience, and it's super portable. 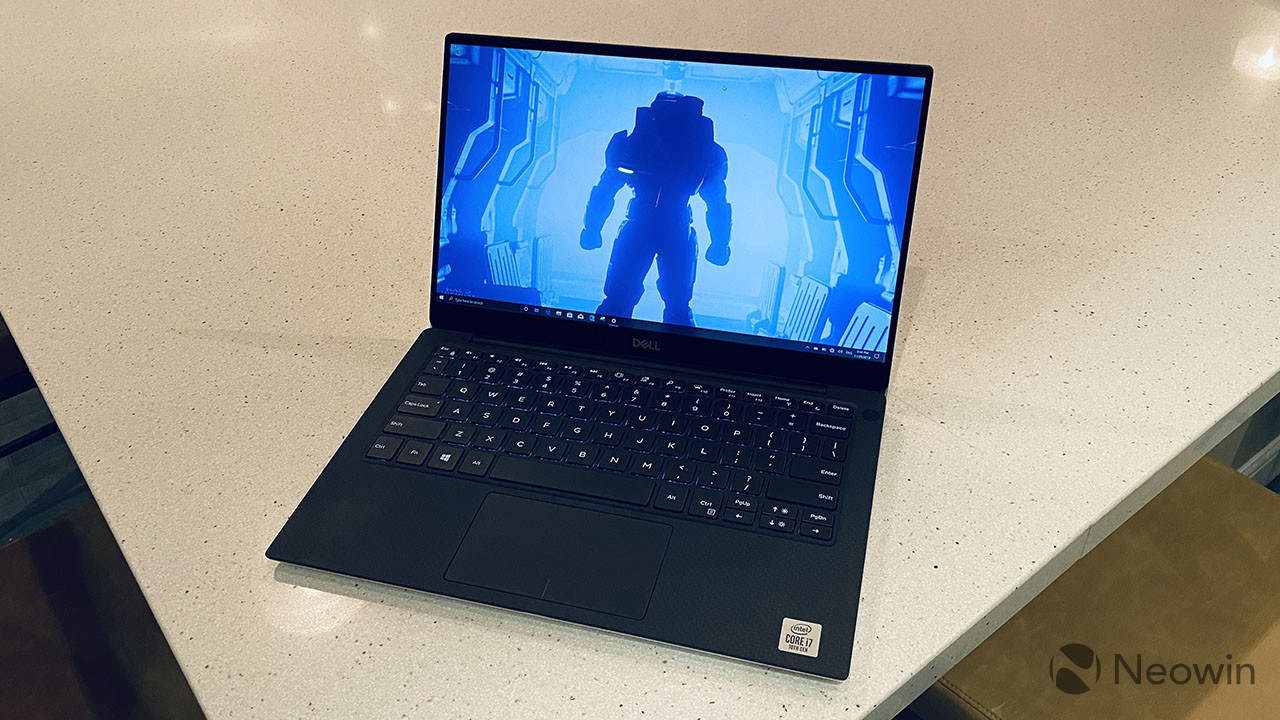 There are two issues that I have. One is that there's still no IR camera, which is inexcusable, especially when Dell had it in the XPS lineup last year only to kill it off. The other is that I'm not sure why you wouldn't just get an XPS 13 2-in-1. With the 2-in-1, you get the versatility of the convertible form factor, better performance from Ice Lake, and pen support. It's a little more expensive, and it weighs 0.2 pounds more, but I think it's worth it.

At this point, we're just comparing two fantastic portable PCs though. You can't really go wrong with either. The XPS 13 is going to provide a great all-around experience, and yes, it's a bit lighter and more inexpensive than the 2-in-1. If a clamshell is what you're in the market for, then the XPS 13 is for you. 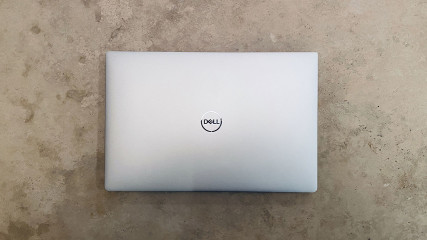 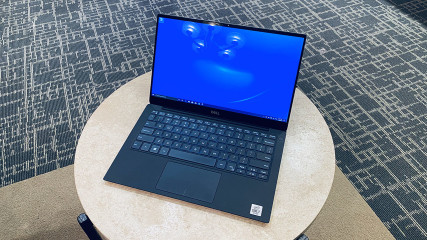 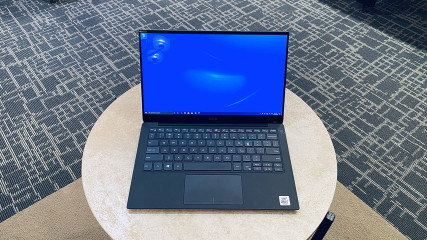 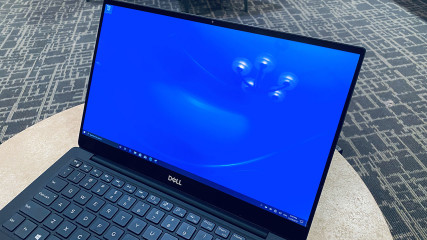 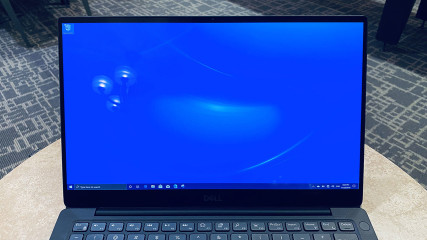 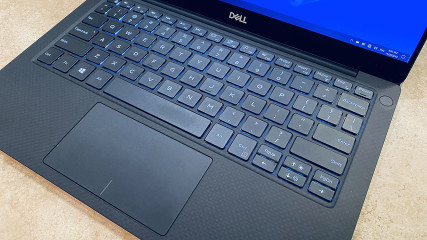 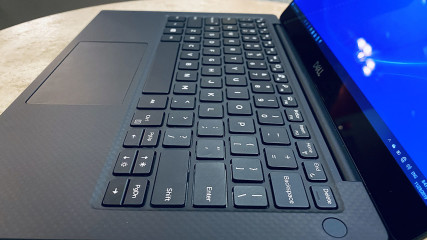 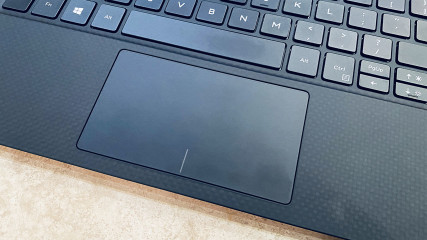 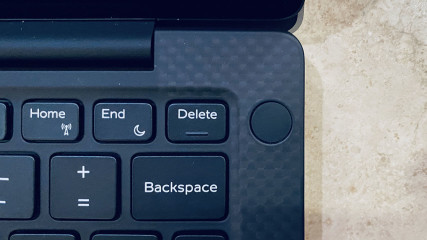 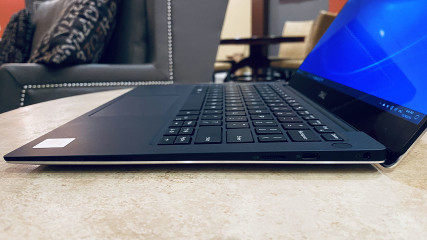 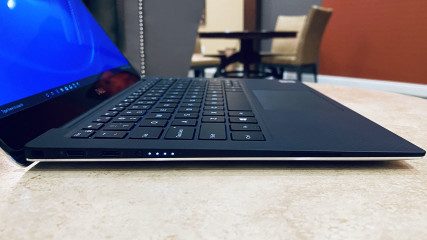 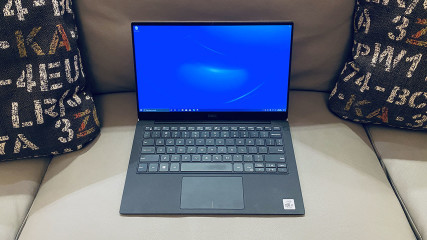 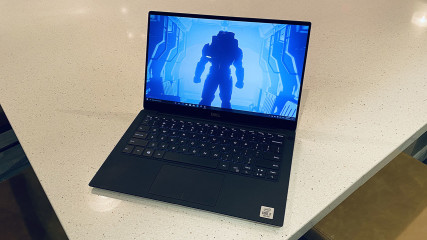 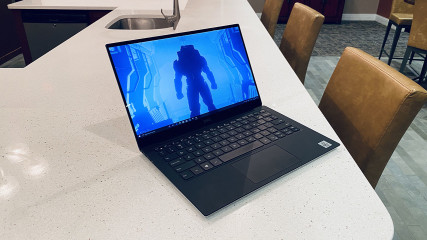 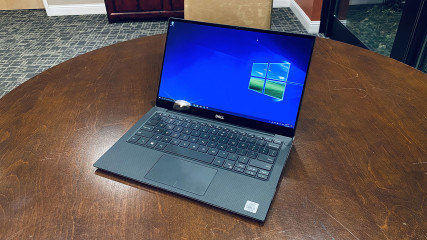 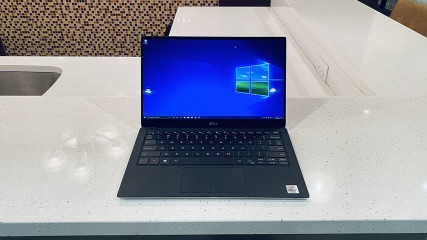 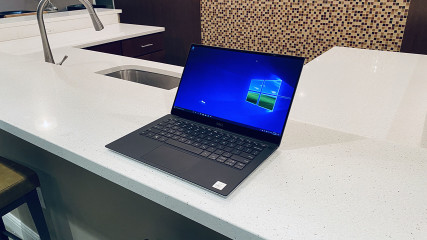 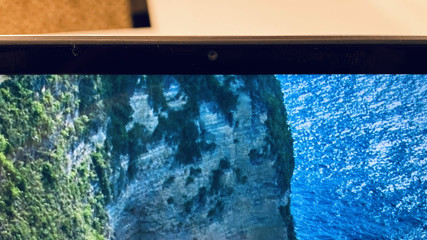