I guess it all started with currency.

It used to be that stuff had value, and if you wanted something that wasn’t yours, you’d have to give up some of you own stuff that had value for that other stuff you wanted that also had value. This made sense to people, and primitive economies were born. Currency formed a level of transaction standardization where people could assume the market value of a set weight of metal or other medium would be honored. Currency was convenient. You could keep it on your person, and carrying around some gold nuggets was a vastly superior way to pay for food than carrying around your prized cattle to trade with; it was so convenient that people started parting from their money faster, and economics liked that. Fast forward one or two thousand years, and currency is no longer the gold standard (see what I did there?) of goods transactions. A few companies started using magnetic strips on plastic cards to represent a guarantee of funds to a merchant. Add the proliferation of consumer credit to the equation, and people are suddenly spending nonexistent (in a physical sense) money and receiving valuable goods. This caused a huge boost in spending, and a huge boost in personal debt, and it showed many people what the consequences of irresponsible spending are.

Credit cards are considered by many to be a failed social experiment. It showed that people, when faced with an abstract notion of value, won’t valuate it like actual value. The convenience of the swipe and the reality of the goods received are too much for many to handle, and people are drowning in debt. This certainly isn’t the case for everybody, and credit card debt has generally been in decline since the economic disasters of 2008, but the effects and ripple effects of large public debt are felt by all.

With the entire idea of credit cards and credit still under scrutiny by regulating bodies around the world, the technology industry is ready to start rolling out NFC technology to process payments. Near Field Technology is form of short-range wireless communication that is very fast to connect and is resistant to interference, making it a great candidate for short wireless communication in crowded areas. It is slower than Bluetooth as far as data transfer rates go, but it can pair two devices in a tenth of a second. It also serves as an improved RFID scanner, as it can scan inactive sources of simple information like tags or stickers as well as peer-to-peer communication, which requires both sides to be actively transmitting. There are many smartphones that include NFC functionality, including the Samsung Galaxy Ii and the Nexus S. 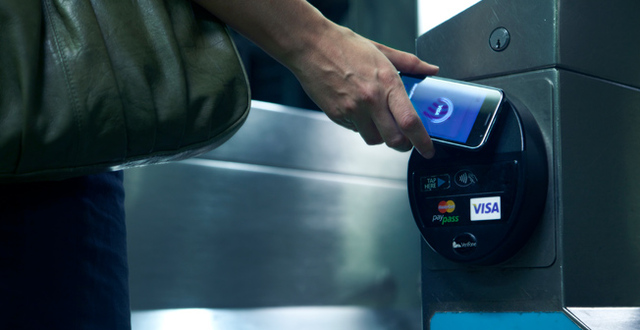 While there are many potential uses for NFC, payments from your phone has proven to be one of the most anticipated uses. It moves the world one step closer to a place where a wallet is superfluous, as all of your payment and identification data can be stored on one device that can communicate wirelessly with point of sale systems.

The technology, while increasingly available in phones, is still stagnant on the retail end of things. In a ZDNet interview, PayPal’s director of mobile, Laura Chambers, says that there is a general lack of confidence in amongst retailers in such a new technology. This is also the reason, according to Chambers, that Apple is rumored to have decided to leave NFC out of the next iteration of the iPhone. Apple’s reluctance to support the technology is going to be a huge factor in its proliferation simply because of the sheer numbers of iPhones in consumers’ hands. Even if Google, Samsung, HTC, Motorola, and Sony all got behind the electronic payment companies and pushed NFC to market, Apple’s indifference to it would still be an ultimately deciding factor for retailers.

However, the question is not a matter of if, but of when. NFC promises a method of getting consumers to part with their money faster and easier than ever before. It doesn’t take a brain surgeon (or a rocket scientist) to see that the credit card companies hit a veritable gold mine with their innovations in the science of getting people to spend more money. Credit cards, however, are still a physical device. Once the ability to spend money in a store becomes a fully digital transaction, simply another wireless function of your smartphone, people will spend the money they may or may not have faster than ever before. Apple may not be getting behind the NFC parade for the iPhone 5, but that could very well just be a response to general lack of interest among retailers, and that disinterest is most assuredly temporary. 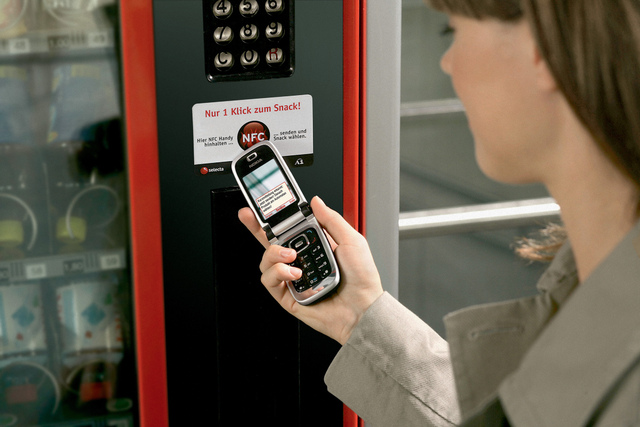 While the idea of wireless short range payments from your phone is tantalizing to some, it’s downright scary for those watching the effects of years of credit debt taking its toll on global economies. While the technology is great, and it offers so much more potential than just a wireless payment system, do we really need an easier way to spend money? I hate to sound old, but this time I think that the old ways may have been better for us as an acquisitive society. When money was “real” and physical, we were less prone to overspending it and debt was something that you incurred only when you absolutely had to.

Nevertheless, there is hope. There is a clear advantage to moving payment systems to smartphones, and it is the one feature that no credit card can offer. Smartphones can communicate with you as well. If you spend money with it, it can show you the effect of your spending on your bank accounts, in real time. It can track spending trends as you form them. It can tell you that you’ve spent $75 at Starbucks this week when you’ve bought your 10th caramel macchiato on Tuesday. It can show you, and it may actually make you think twice. You see, NFC doesn’t have to be only the most convenient way to spend money. It can also make us smarter spenders. It can tell you. “That pair of shoes will put your checking account at dangerously low levels. If you buy these shoes, you won’t be able to pay your mortgage this month. Are you sure you want to continue with this purchase?”

NFC payments are a scary prospect, and our general performance in the credit card business has shown that we aren’t always the most responsible spenders. However, it doesn’t have to be this way. With some solid regulation and some innovative implementations of mobile payment platforms, NFC could actually help us spend smarter, not easier.