Study and research isn’t required to tell you three things. Android mobile devices dominate the phone world, Apple is starting to lose some ground (and RIM has already lost plenty) and Windows Phone gets people talking, but doesn’t produce the market share to complement the feedback the OS gets. 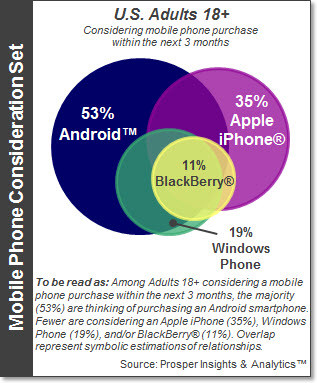 But now a study by Prosper Insights and Analytics has shown that yes, Android is the top dog, but when it comes to the next phone you lovely people are considering, 19% of you are looking to Microsoft and a Windows Phone.

Based around the short-term plans of the people surveyed, those looking to buy a new smartphone in the first 90 days of 2013 overwhelmingly chose Android over any other handset type, with Apple the closest at 35%. Windows Phone and RIM lag behind Apple with 19% and 11% respectively. We know you’re thinking that “these figures don’t add up” and you’re right. There is a degree of overlap in the percentages, so while some people will exclusively go with Android, others might have a backup or second choice of Windows Phone.

While the main focus was going to be on Android and Apple fighting it out amongst the age groups, it’s a good thing to see Microsoft and its Windows Phone getting better numbers than RIM and its Blackberrys, even if this is all hypothetical – considering does not mean purchasing!

When all is said and done, and the number processed and picked at, it goes to show that Microsoft and the Windows Phone platform is gaining ground, at least in the minds of the consumer.