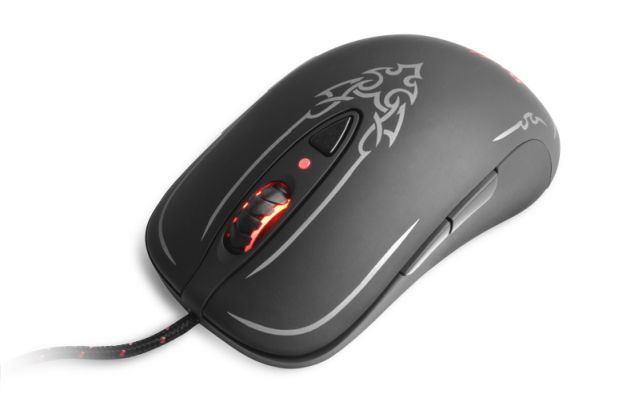 SteelSeries has just announced that as part of its E3 2011 product reveals it will sell a number of officially licensed Diablo III products. The long awaited third game in the action-RPG series from Blizzard won't be at E3 this year but that isn't stopping SteelSeries from announcing that it will launch a Diablo III mouse, headset and mousepads when the game itself is launched.

The SteelSeries Diablo III mouse product will feature seven buttons that can handle 10 million clicks which SteelSeries says is three times the amount that can be handled by a normal mouse; perfect for hours of monster hunting. All the mouse buttons can be remapped by the player. The mouse has a maximum dpi setting of 5,000 and also has red lighting for the scroll wheel, the CPI Indicator, and the Diablo III logo. The mouse's price will be $69.99.

The SteelSeries Diablo III headset will have a "lightweight, over-the-head suspension design that provides players with closed-type, leather earcups" with support for 50mm driver units. This will be the first SteelSeries headset to offer lighting with Diablo-inspired "demon red" color and three levels of light. There will be 18 lights "surrounding the edge of each ear cup, and the three Diablo slashes." It will also have a retratavble microphone. The headset will be sold for $199.99.

Finally SteelSeries will sell two high quality mousepads that have artwork from Diablo III. One features the Barbarian character from the game while the other features the Witch Doctor. Each mousepad will sell for $14.99.