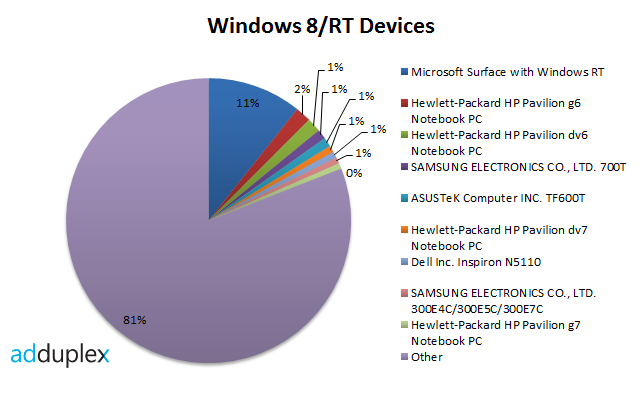 Microsoft still won't reveal how well its own home grown Surface tablet is selling a few weeks after its launch, although third party data shows it's doing pretty well so far. However, some new information from a online ad network may show that the Windows RT-based device is currently the most popular one among the first users of Microsoft's two new PC operating systems.

AdDulpex, which runs a cross-promotional ad network specifically for Windows 8 and Windows Phone 8 apps, posted today that numbers show the Surface tablet leading the Windows 8/RT hardware market. The data shows that 11 percent of apps that access the AdDuplex network are running on the Surface.

The blog adds, "That said we had hits from almost 3 thousand different devices running Windows 8 (or Windows RT) in a single day." It also says that while Surface is the most popular single Windows 8/RT device on their network, HP is the number one overall manufacturer of Windows 8 PCs with 24 percent. Microsoft, with just one device, is a close second with 17 percent.

The blog says, "If you’d like to go for a negative spin on these stats, I’d say that it shows most of the Store app usage happens on tablets and not so much on 'traditional' PCs." AdDuplex also has information on how people are using their Windows 8 apps. According to its data, a whopping 92 percent of Windows 8/RT owners use their apps in full screen landscape mode.