Apple's upcoming Wednesday event is highly anticipated by a large amount of people; the company is expected to release their tablet device, one which has had rumors surrounding it since about 2001. That's almost a decade of speculation, so it's certainly been a long time coming. With the supposed announcement only days away, rumor blogs are at their peak, even more so now that a company named Flurry has discovered evidence of around 50 tablet devices being tested in the Cupertino area.

Flurry is a company that helps developers track device usage and statistics by sending back hardware and software information whenever an application (with Flurry's Analytics code) is run. Flurry posted the discovery on their blog, stating that around 200 different applications from the App Store had been tested on the devices, which indicates that the new tablet will indeed be compatible with software already found on the App Store. Interestingly, the tests also indicate that the device is primarily aimed at gaming (that, or the testers are just very keen to play some games), as there were more games tested than any other category. Second up was the entertainment section, with news and books in third.

The devices appeared to be running version 3.2 of the iPhone OS, which would make sense as Apple generally announces the *.0 releases at a special event in March; though it's rumored that they may announce version 4.0 in a couple days, they'll most likely do it on their usual schedule. It was proposed that perhaps we're just looking at a new version of an iPhone running the next iteration of the software, but Flurry ruled this out for the following reasons:

1. Flurry Analytics 'asks' what the hardware is when it is run, and in every other scenario this works fine, though this time it doesn't identify an iPhone device. The company can already detect iPhone devices running the 4.0 software.

2. The 4.0 iPhone devices are said to leave the Cupertino campus, which the supposed tablet does not; this makes perfect sense as Apple would want to keep everything as secret as possible before the announcement.

Flurry tends to only release information when it has been checked and double checked, as they stated they don't build a business on rumors. Either way, all will be revealed come Wednesday morning, and you can expect that Neowin will be covering the news closely. 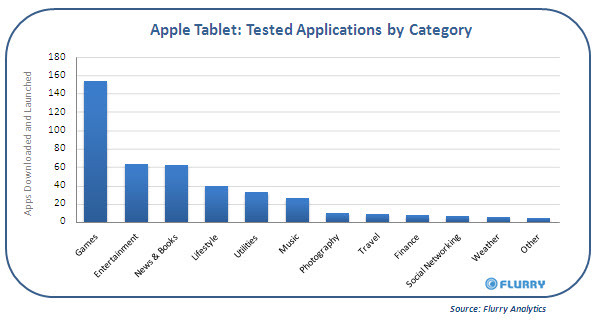