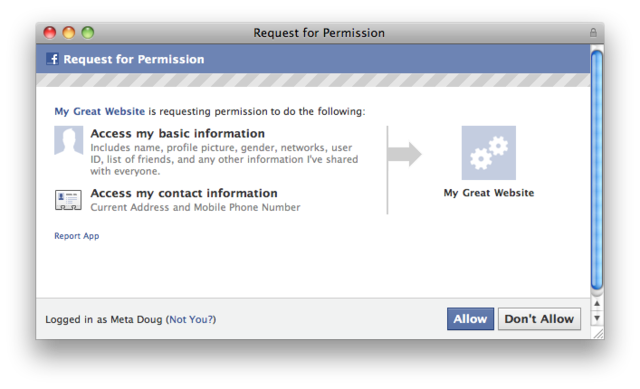 In a move sure to have privacy advocates up in arms, Facebook will now allow apps to access a user's current address and mobile phone number.

The new ''feature'' was quietly introduced in a blog post by Facebook platform developer relations employee Jeff Bowen late last Friday night. The Atlantic spotted the post, in which Mr Bowen outlined the new ''user_address'' and ''user_mobile_phone'' permissions which developers can now hook into.

According to Nicholas Jackson, associate editor at The Atlantic, the blog post was quickly inundated by users angry at another perceived invasion of privacy from a company already infamous for its lackadaisical attitude to user privacy. Curiously, Mr Bowen's post was updated early Saturday afternoon and as of 1AM EST today no comments were visible, though it was possible to add a comment.

''I realise that Facebook users will only have their personal information accessed if they "allow" the app to do so, but there are just too many attacks happening on a daily basis which trick users into doing precisely this,'' he said.

''Shady app developers will find it easier than ever before to gather even more personal information from users. You can imagine, for instance, that bad guys could set up a rogue app that collects mobile phone numbers and then uses that information for the purposes of SMS spamming or sells on the data to cold-calling companies.''

He advised users to remove their mobile phone number and address from their Facebook profile immediately, but Mr Jackson had a more radical solution for users looking for absolute privacy.

''If you're seriously concerned about this and other changes to Facebook's privacy settings, there's only one way around them: Remove yourself from the network entirely. It's not a move I advocate as I believe the site does more good than harm and that you're only cutting yourself off from a large -- and growing -- part of our lives, but it is an option to consider,'' he said. One Twitter user had a far more clever way to deal with the change.

Update: Facebook appears to have been caught out by the size of the user backlash and will now ''temporarily disable'' the ''feature'' until it works out a way to let users know more clearly when they'll be sharing their mobile number and address with applications.

''Over the weekend, we got some useful feedback that we could make people more clearly aware of when they are granting access to this data. We agree, and we are making changes to help ensure you only share this information when you intend to do so. We’ll be working to launch these updates as soon as possible, and will be temporarily disabling this feature until those changes are ready. We look forward to re-enabling this improved feature in the next few weeks,'' wrote Facebook's developer relations director Douglas Purdy in a blog post.