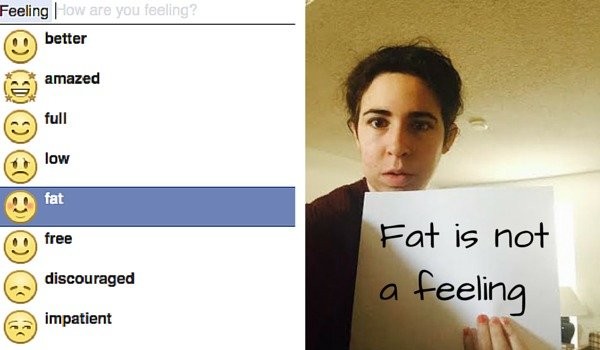 Facebook has removed the "feeling fat" emoticon from its social platform under pressure from online activists after a petition regarding the topic accumulated more than 16,000 votes. The petition demanded that the option should be removed as "fat is not a feeling" and it is a form of "body shaming hatred".

Facebook responded to the call on Tuesday stating that:

We’ve heard from our community that listing “feeling fat” as an option for status updates could reinforce negative body image, particularly for people struggling with eating disorders. So we’re going to remove “feeling fat” from the list of options. We’ll continue to listen to feedback as we think about ways to help people express themselves on Facebook.

The online movement on Change.org had attracted 16,771 signatures before it was finally approved by Facebook much to the joy of its creator, 24-year-old student Catherine Weingarten who believed that the double-chinned emoji was also "encouraging negative body image among girls." In a victory post to change.org, she wrote:

I'm thrilled that FB decided to remove the ‘feeling fat’ emoji. This success shows us that people together can challenge the cultural messages that are so damaging to our ability to love ourselves and live comfortably in our bodies. As someone who struggled with body image, I feel so happy that I’ve helped eliminate one form of body shaming hatred on the internet.

I’m proud to have partnered with Endangered Bodies to lead this effort.

The "feeling fat" emoticon has been now been replaced by a "feeling stuffed" emoji which ideally shouldn't offend many people. With that being said, there are still many options available in the feelings library, one which says "feeling ugly".

Source: Change.org via The Washington Post |Image via Change.org