External investment in Facebook is still quite new, since the company only opened its doors to traders on May 18th. On that first day all seemed well with the company, and stock prices rocketed. After the excitement of the first day, the service's share prices dropped. They began at $38 per share and reached a peak of more than $42 dollars, but this was short-lived.

On Tuesday, July 31, stocks in Facebook were as low as $21.61 each. That's a drop of 43% from their opening prices. It's closer to a 50% drop from their peak, if you consider it that way. The graph below documents the rise and fall of stock prices in the company over the first week of trading. Just remember that the line is now running lower than it was even then. It isn't a pretty picture. 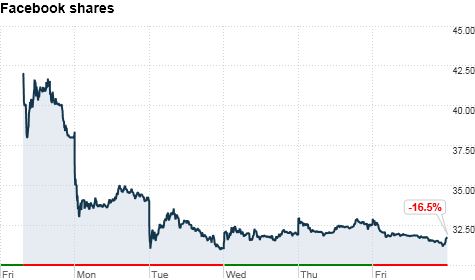 This was a week after the service began trading. It hasn't gotten any prettier since then.

When August 16th rolls around, those stock prices could drop even further. Company insiders are allowed to sell their shares from that point. An insider denotes an officer, director, or employee. Insiders hold 268 million shares in the company, and August 16th is 91 days after they received their shares. From then on they can shift their stocks, potentially flooding the market with them and dropping them even further.

For a service that seemed so promising in the first 24 hours, Facebook has had a remarkable fall from grace. It is now considered to have been the second worst performer on the stock markets this year. It still has some way to go to take the first place for disappointment. At the moment, the Iowa-based Renewable Energy Group has that honor. Their stocks dropped by 51% from their opening prices. Facebook has some distance to go to beat REG, but its performance so far this year has been underwhelming, to say the least of it.