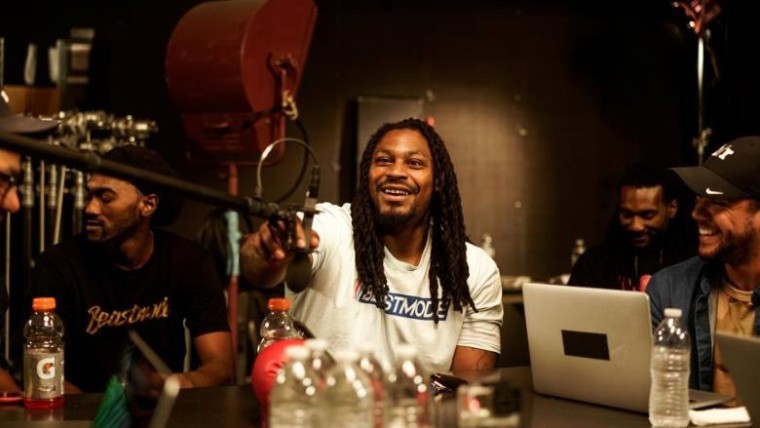 Marshawn Lynch is known for his memorable slogans and brutish running style, which earned him the nickname "Beast Mode" while playing in the NFL for the Seattle Seahawks. His silly antics and magnetic personality have garnered numerous headlines and even landed him on an episode of Running Wild with Bear Grylls. There seems to be a lot of renewed attention toward Marshawn Lynch, and it seems Facebook aims to capitalize on that.

The social media juggernaut is reportedly paying Lynch millions to star in a new reality TV series called "No Script". In the series, Marshawn Lynch is filmed as he lives out fun experiences, like driving a race car wild until it burns out its tires. The series will be original in its content and be released in short 10-15 minutes episodes. The series is also ultimately owned by Bleacher Report, who will have creative control of the series throughout its lifespan and will give Facebook exclusive airing rights for an unknown amount of time.

Rory Brown, president of Bleacher Report, commented on the series, saying that he feels that “people are going to spend more time on Facebook because of it". With the recent launch of Facebook Watch, the company is aggressively pushing for interesting and original content to draw more viewers onto its newly-launched video platform. For Facebook, adult language is of concern and Brown "wouldn’t be shocked if [it] ends up being censored".

Facebook must be looking for other big opportunities in original video programming as, per the Reuters report, the company is said to be committing roughly $1 billion for Facebook Watch to lure in more desirable video content. If that's the case, Facebook is stepping into a highly-competitive space occupied by major streaming companies like Netflix, Amazon, Hulu, and even Apple, which appears to be putting big money down to produce original streaming video content and directly compete with movie theaters over newly-released films.