"In the early days, we gave employees iPhones primarily."

Those are the words of an unnamed Facebook spokesperson. As the number of Android running smartphones continues to rise, Facebook is urging its employees to switch from iPhones to Android devices and start dogfooding their own apps for Google’s mobile OS.

In case you don’t know, dogfooding basically means eating your own dog food. It’s a slang term used to describe a scenario where companies use their own product to demonstrate the quality and capabilities of the product. Facebook has dubbed their campaign ‘Droidfooding.’ 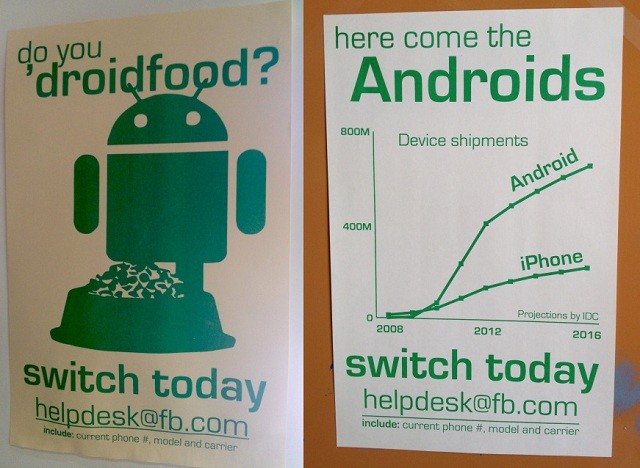 Facebook’s HQ is now plastered with posters asking their employees to “switch today.” This is due to the gap in the number of employees using the iPhone over an Android device. The ultimate goal is to get a fair proportion of the company testing its Android apps and devising what could be done with the OS’ flexibility.

The same Facebook spokesperson gave his or her opinion on the handset usage within the company:

We don’t encourage one device over another. We let employees choose. I don’t have a ratio but with the early focus on our iPhone app and the multi-year cycle of carrier contracts we do have more iPhones deployed.

With the campaign starting to gain some traction, Facebook themselves chimed in on the situation:

We’ve created more awareness that Android devices are available. There’s plenty of people here carrying around both devices, and not just engineers and not just mobile people.

Facebook then make their employees use the most recent beta version of apps like Facebook For Android and Facebook Messenger. If they run into a problem, they can report the bug through the bug reporting feature Facebook build into its internal beta builds. Called ‘Rage Shake’, the reporting feature allows an employee to enthusiastically shake their phone and the current state is then automatically logged and details sent to Facebook’s mobile buq-squashers. The same functionality is available to both iOS and Android app testers.

With 4,000 testers, Facebook is able to maximise the number of bugs reported using this, more simple method of reporting issues. Although how many of those 'rage shakes' are due to the user just being angry at their phone?!

It should be noted that it is Microsoft themselves that develop and publish the Facebook app for Windows Phone and Windows 8. Whether or not they have a ‘Rage Shake’ bug reporting feature remains a mystery!