We've been testing a lot of NAS devices lately: From the entry level two bay Thecus N2310, to the great all-around four bay DS414, to the highly performant five bay Thecus N5550, to the virtualization-wielding QNAP TS-451, there's something for everyone. But what happens to your data if your house burns down or floods? With the previously mentioned devices, your data is gone and it's time to restore from an offsite backup, assuming you've been diligent in keeping your data backed up. Today I'm going to take a look at the ioSafe 214, a device that promises to keep your files safe from both fire and flood.

For some background, I first heard of ioSafe while we were covering CES back in 2012. We drove to a remote location where the company erected a Faraday Cage for the sole purpose of zapping their drive enclosure with bolts of lightning. The demonstration was pretty awesome, and the data was indeed still there at the end of the demo, albeit it took a little work to make it available. 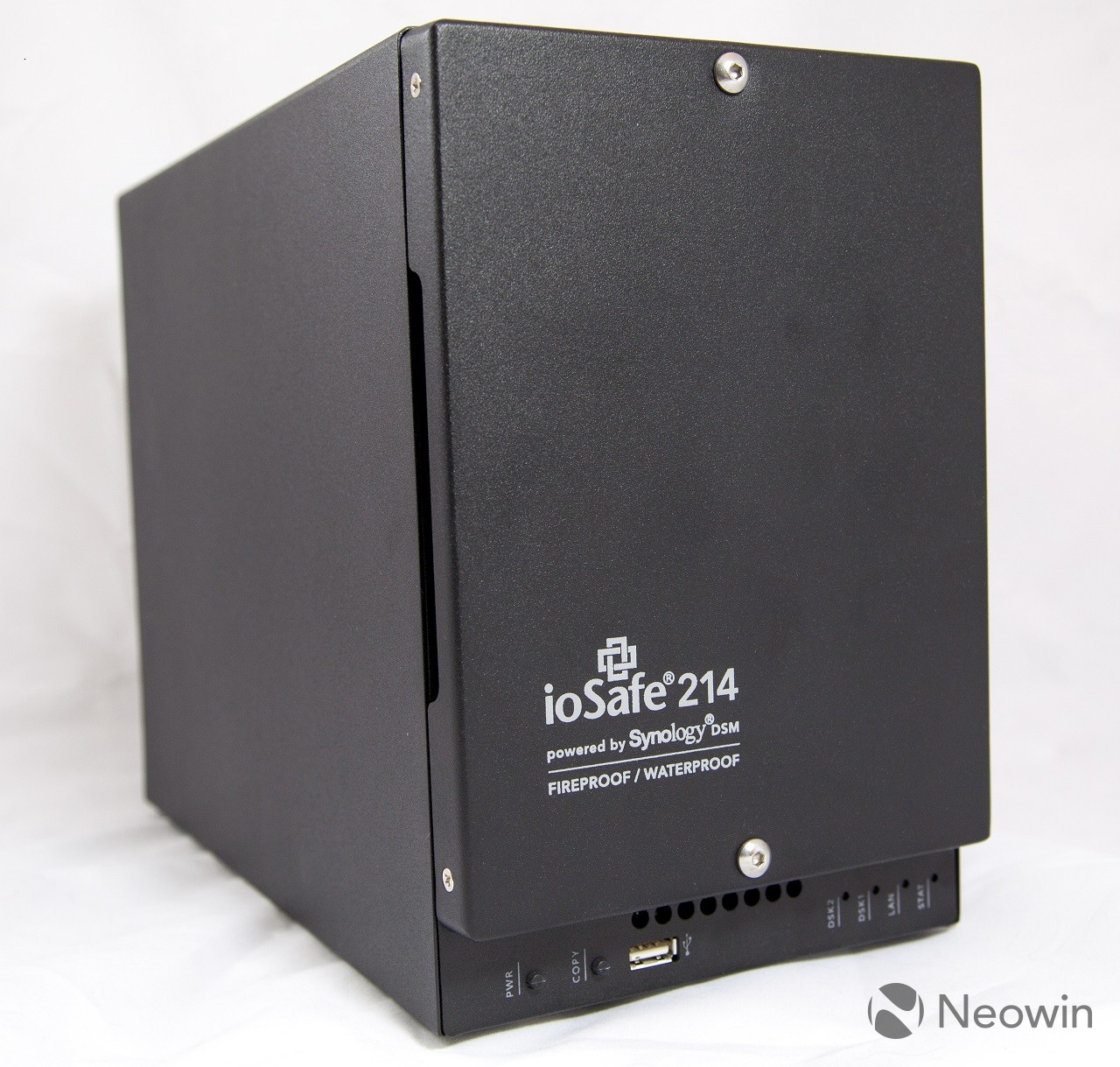 So when ioSafe reached out and asked if I'd be interested in reviewing the 214, I was excited to try my own methods of destruction. Unfortunately, ioSafe recommended against using thermite and napalm, so I had to go with plain old fire and water. But before that, I ran the device through some performance tests to see how well it worked.

The ioSafe 214 sports a dual core Intel Atom processor and has 512MB of RAM. The device has two hot-swappable drive bays, although getting to them is a challenge since they're protected from the elements behind multiple layers. It can support a maximum of 8TB of storage (2x4TB) in a JBOD configuration, although we'd recommend using RAID 1 or SHR, giving an effective maximum of 4TB. Be sure to check the official list of supported drives before buying your own.

There is a single Gigabit Ethernet port on the back that supports Wake On LAN/WAN if your network supports that function. 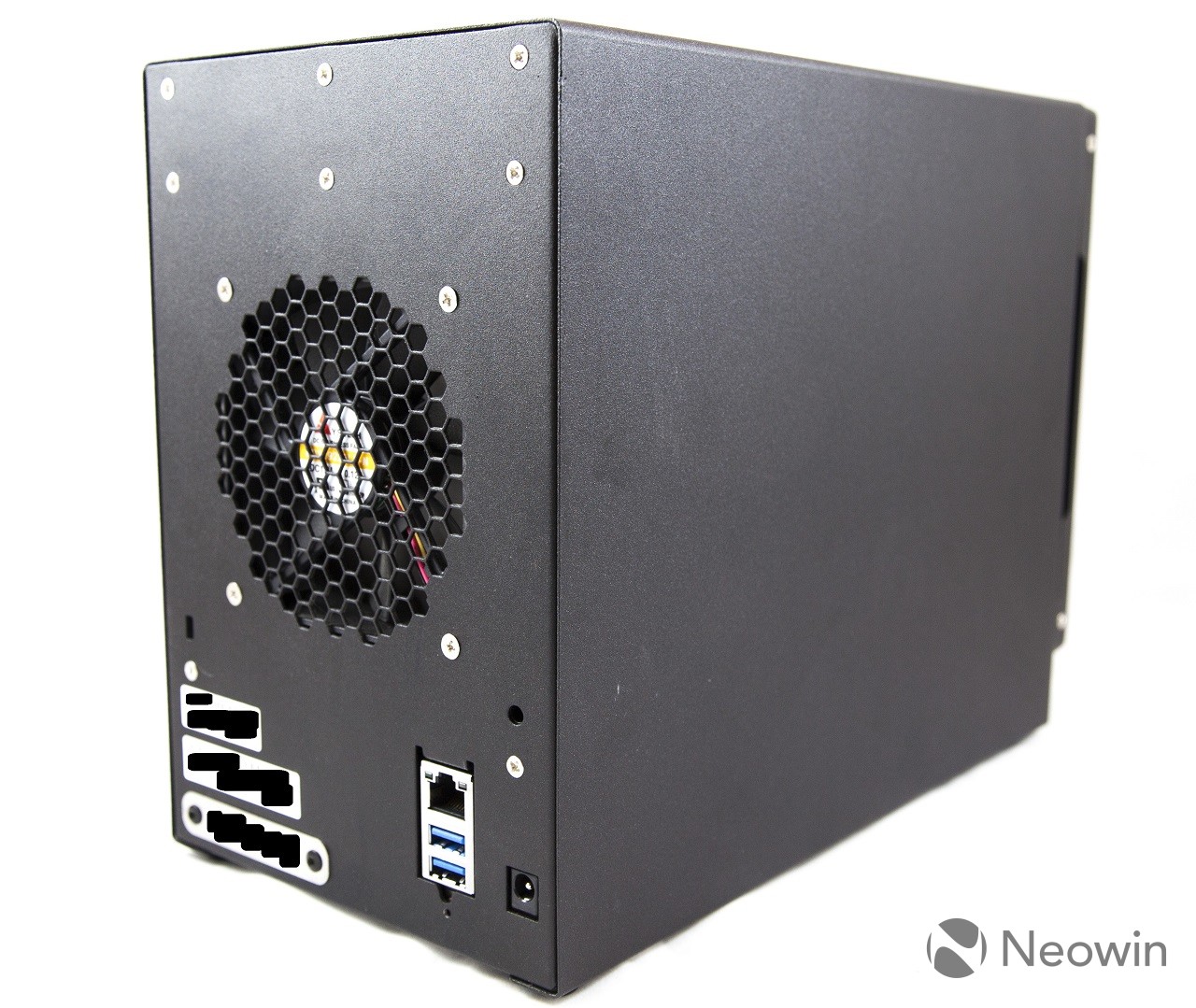 There are two USB 3.0 ports on the back of the device, along with the Gigabit Ethernet port and a 120mm fan. The front of the ioSafe 214 sports two inconspicuous buttons in the lower left, one for power and one for USB copy. Next to the buttons is a USB 2.0 port. There are four LEDs in the lower right that show the status of the drives, network, and power. Other than that, the device is nothing more than a big black box. 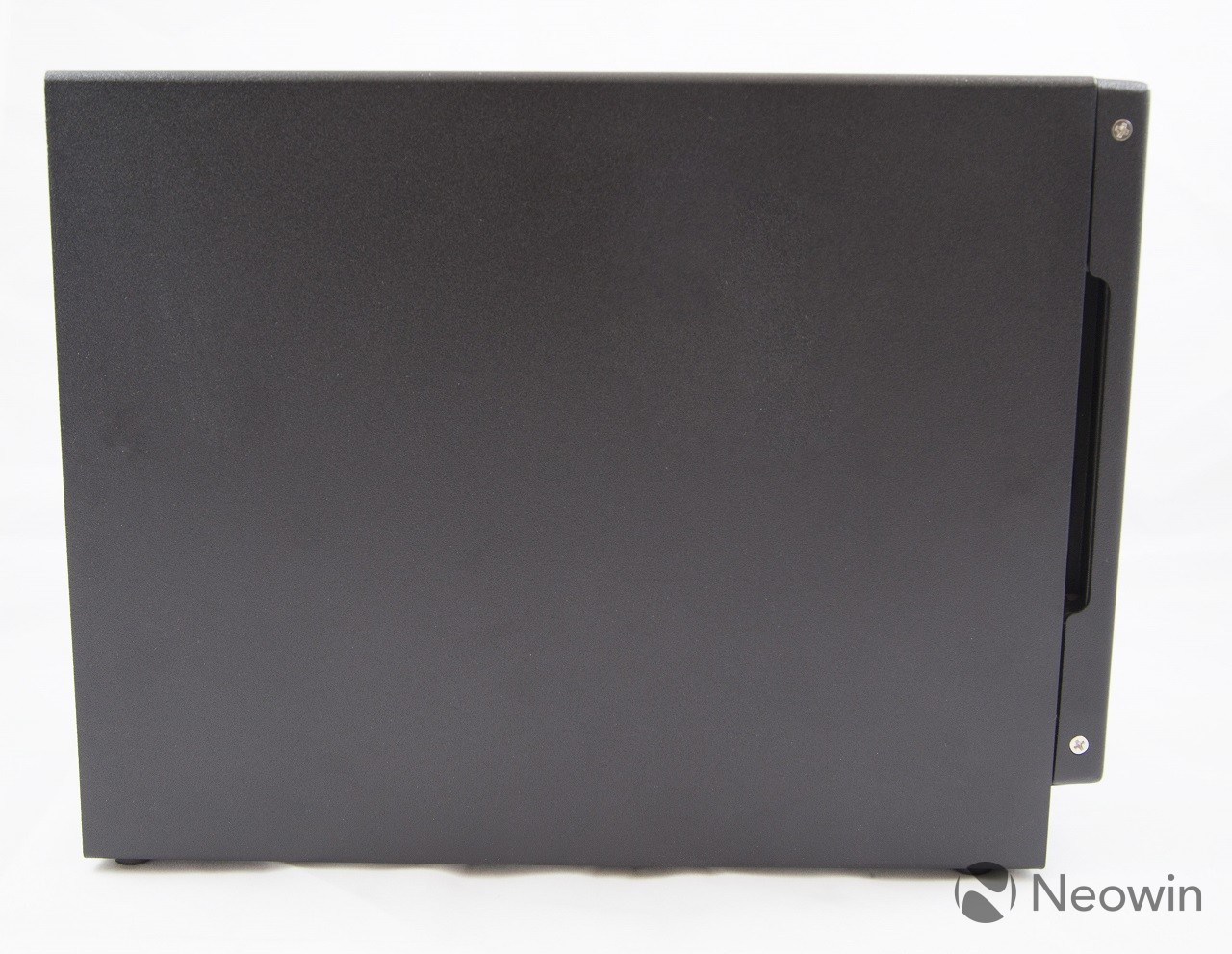 And what a big box it is. The ioSafe 214 is massive considering it only contains two drives. As I said though, this is required to protect the spinning disks from the elements.

Have I mentioned just how big the ioSafe 214 is? You're struck by how bulky the device is when you first pick it up, but once you take it apart in order to put the hard drives in, you realize just how well constructed and engineered the NAS device is. 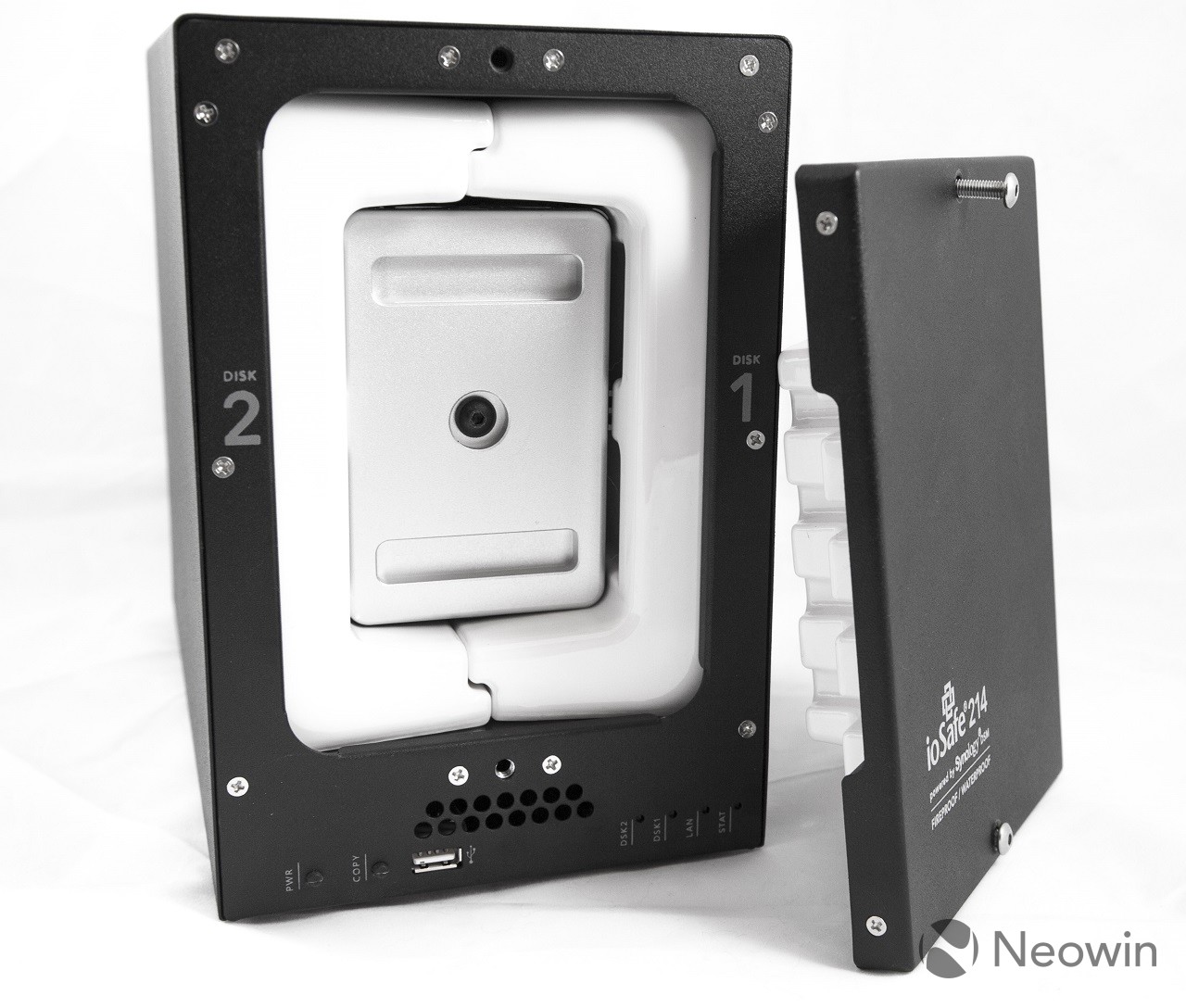 Breaking into the ioSafe 214 sometimes feels like trying to crack open a high quality safe. It's not that getting to your drives is difficult, it's that there are multiple layers keeping your disks safe. While from the outside you see mostly black sheet metal, things change once you unscrew the two bolts from the front of the device and pop the front off: Inside is thick, white plastic that helps insulate the contents from the outside fires that could be raging around the enclosure. 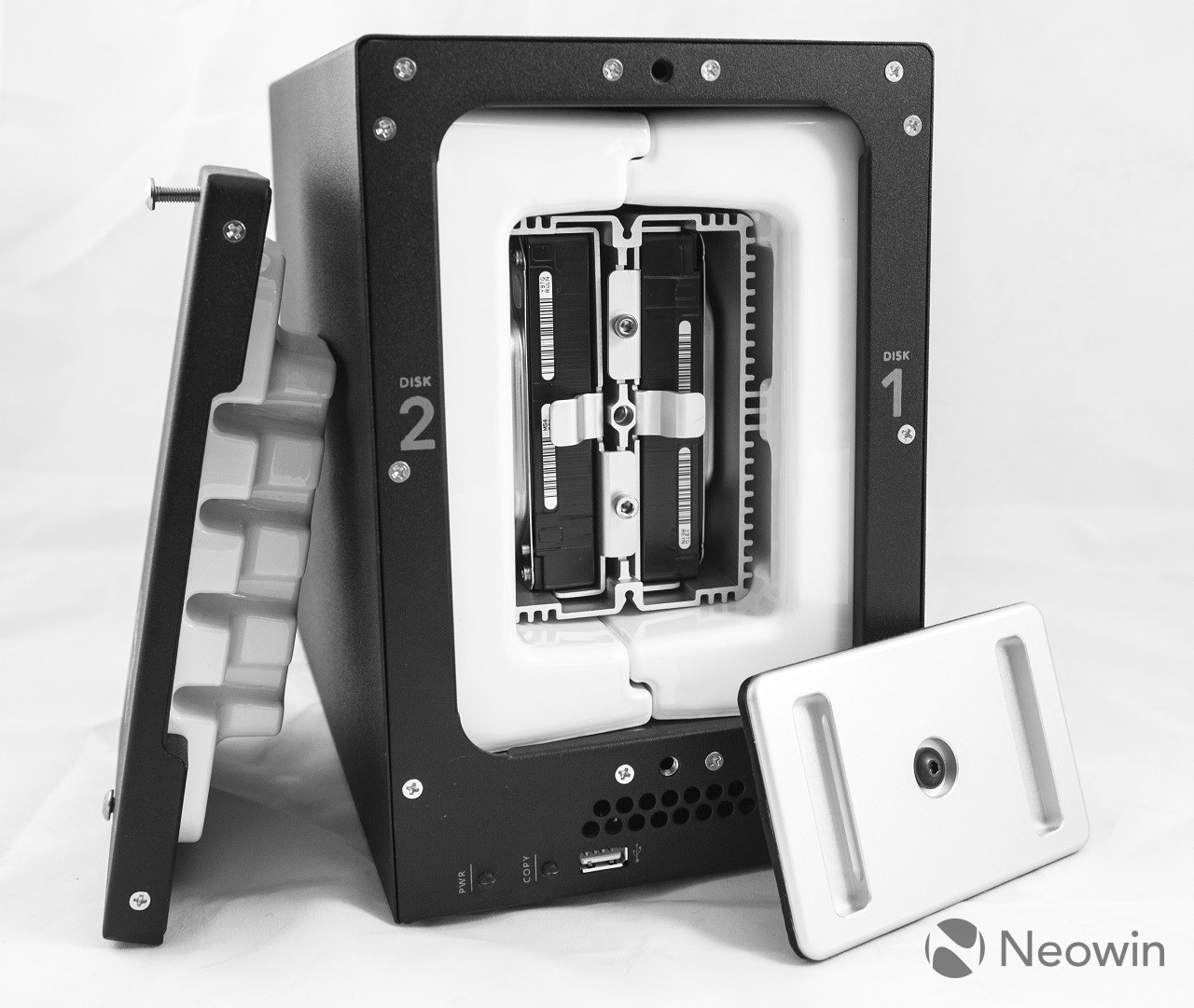 After pulling the front off, there's still more to go as there's a metal hatch that has to be unscrewed. Once that's pulled out, you'll see the two disks surrounded by a metal heatsink. Each has one more screw to undo so they can be pulled out and replaced if necessary. It's also important to note that ioSafe includes the screwdriver needed to undo all of these bolts. They also give you a small magnet that you can attach to the side of the enclosure to ensure that you don't lose the tool.

Other than installing the disks, all you have to do is provide power and network, then press the power button.

Configuration of the ioSafe 414 is done the same was as any other Synology device: From the Storage Manager, select the disks, a RAID configuration (either RAID 1 or SHR is recommended), and you're off to the races. From here, you can install applications such as Audio Station and Video Station to assist in streaming multimedia files. The Synology mobile apps automatically detect the ioSafe 214 and you can start streaming almost immediately. If you've ever used a Synology device before, you'll be right at home because it's literally the same code base. Just make sure you upgrade the operating system to DSM 5; our review model came with version 4.3 which has a known vulnerability to the SynoLocker malware.

I once again tested performance using OSFMount to create a 4GB RAM disk, and then used the built-in Robocopy tool to test performance to and from the ioSafe 414. 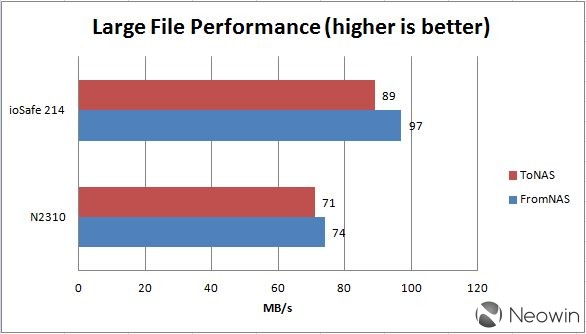 With the two drives configured as a Synology Hybrid RAID, speeds were very good, nearly hitting 100 MB/sec while reading large files (3+ gigabytes), and uploading at 89 MB/sec. This was 25-30% faster than the N2310 we reviewed earlier this year, although neither performance was shabby.

Performance copying small files was also very good, garnering mid-80s when copying to the ioSafe 412, and low 80s when copying from the device. This performance was on par with the N5550 that had four drives, and was much faster than the DS414.

There really isn't much to say about the applications. Since the underlying operating system is Synology's DiskStation Manager (DSM), the same applications that run on any of the Synology devices run here as well. You'll be able to stream audio, video, and pictures to other network attached devices in your home or on the Internet with a minimal amount of work. The free mobile apps also do a great job of providing seamless access to your data.

Let's face it, if you spent this much money on the ioSafe 214, performance wasn't your top priority as there are other options available at much lower price points that would provide the same, or better, performance. The reason you want to buy the ioSafe 414 is to ensure your data is able to survive a fire or a major flood.

Although I wasn't willing to burn my house down to test the capabilities, I did put the ioSafe 214 into a firepit to see what would happen. The first thing to note is that making the fire was a rather difficult task since the NAS device itself takes up so much room in a standard firepit. It took some time, but I was eventually able to get the fire roaring. 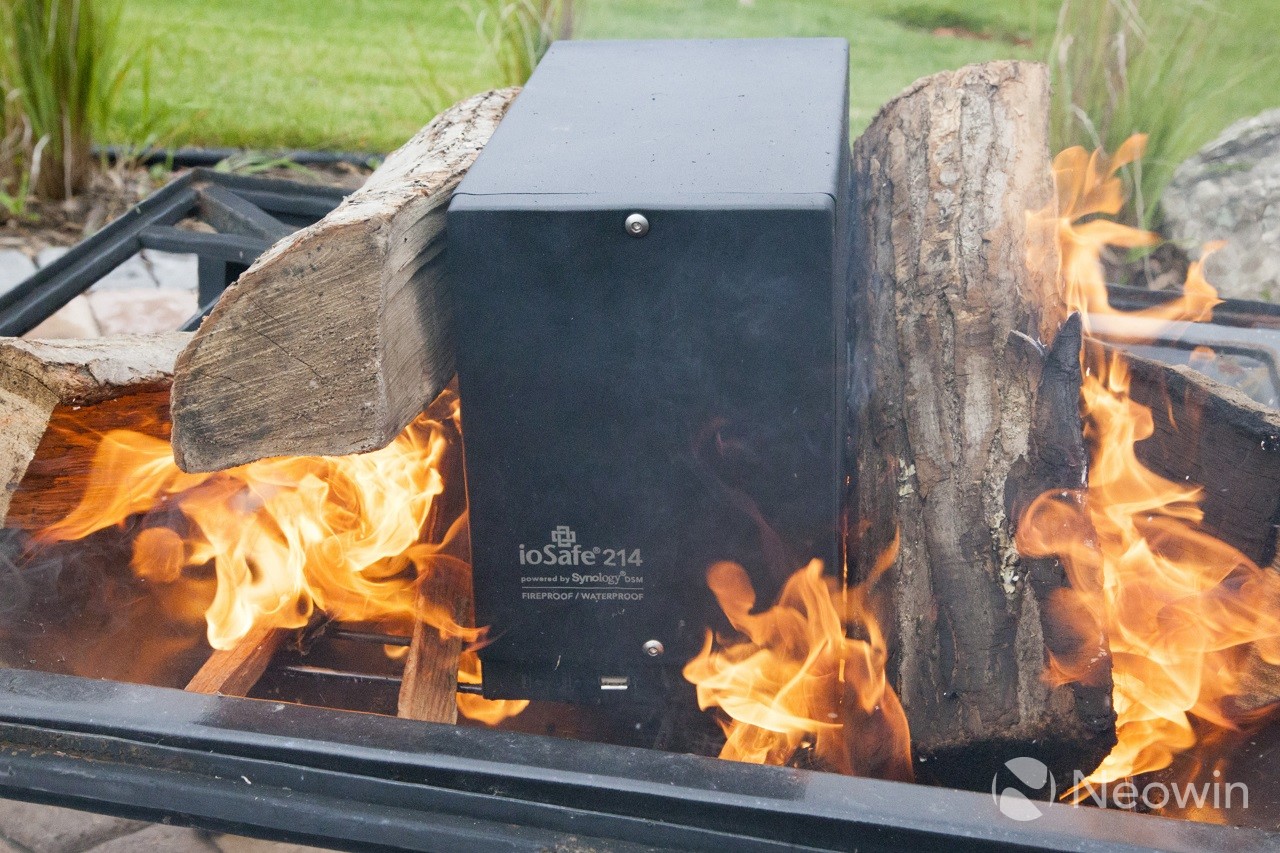 Aside from some neighbors looking at me like I was crazy (and I can't blame them for that), stoking the flames around the ioSafe 214 was actually fun. Altogether the device was in the fire for roughly an hour and, when the burning stopped, the smell of burnt electronics was present. That was not anywhere near as pleasant of a smell as the burning wood was. 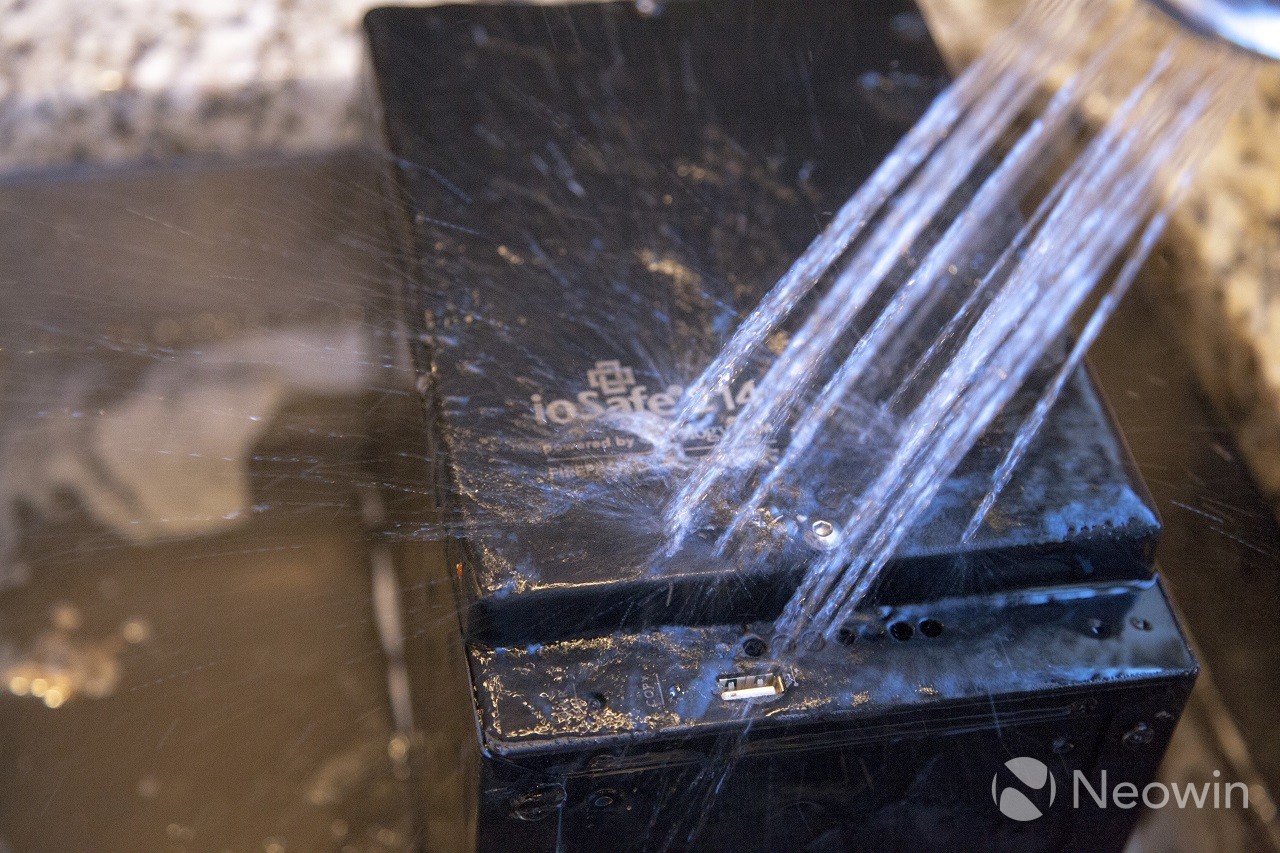 After the device was finished burning, I then submerged it in water to simulate what would happen if the device was in your home when a fire broke out. After leaving it soak for an hour, I dried off the outsides and began disassembling it to get the drives back.

When taking the front bezel off, it was clear that soot and water had gotten behind it, so I was a little worried at this point. However, that's normal and to be expected: The drives are inside of the second compartment, and after pulling the metal heat sink off, it was clear that no water or soot had made its way into the drive enclosure area.

ioSafe recommends sending the drives back to them for data recovery since they have the tools and expertise to restore your files if there's a serious issue. However, our contact at ioSafe said that it's also possible to simply pop the drives into a Synology NAS to restore the files, so I decided to put it in the DS212 to see what would happen.

After putting the disks in and powering the device up, then loading up Synology Assistant to find the NAS on the network, I was a little worried the test wasn't going to work because the tool wanted me to install new firmware on the drives. I went to Synology's website, downloaded the firmware file for the DS212, then followed the prompts to install it. 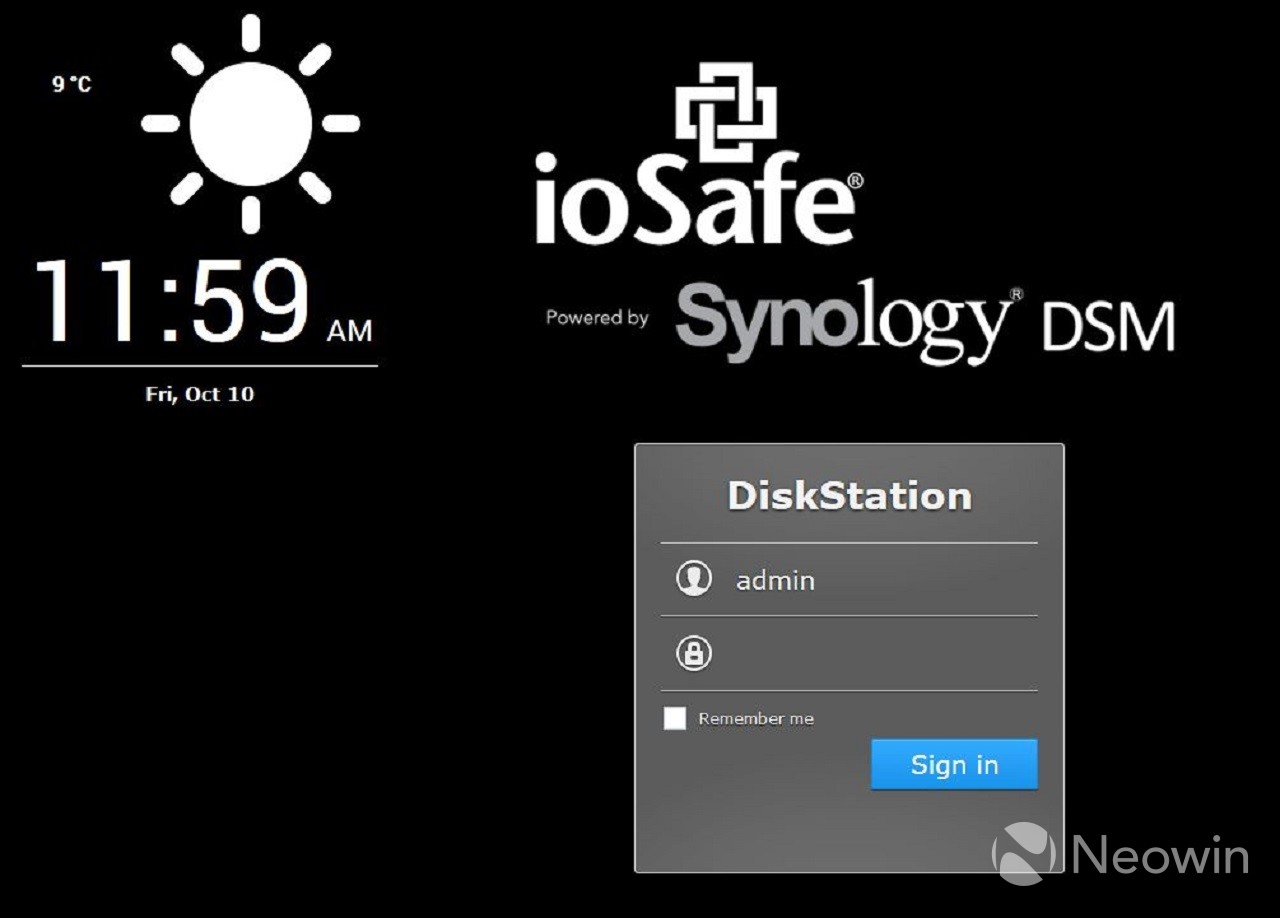 After the installation was complete, I connected to the device and was greeted with the ioSafe background. So far, so good. Completing the login process and loading up File Station confirmed what the company said: The data was completely intact and ready for use as if nothing had happened.

So is the ioSafe 214 worth the steep price tag of $599? That depends on how much you value your data. If you're the type who religiously backs up your files so that you always have at least one real-time copy off-site somewhere, then you probably don't need to spend this much money on something that's simply, in essence, an insurance policy. On the other hand, if there was a disaster and you know you'd need your data immediately afterwards, the ioSafe214 is a great solution and is reasonably priced for its feature set. For a small to medium sized business, the additional cost is probably minimal compared to the potential loss of time having to restore from an off-site backup. 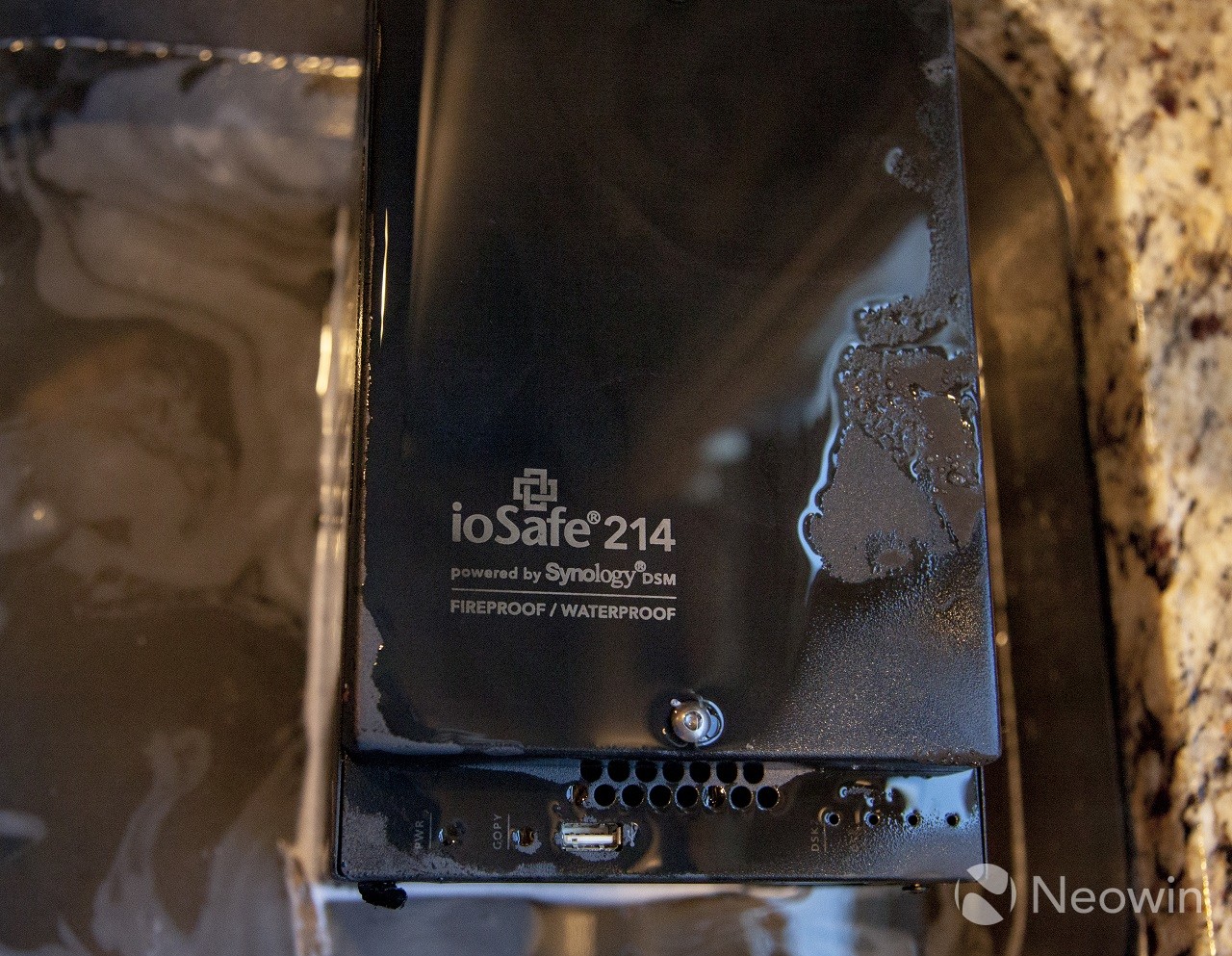 It's worth noting that the base price does not include data recovery services (DRS); the ability to send your drives back to ioSafe for recovery and that feature can add quite a bit of money to the overall quote. Purchasing the ioSafe 214 directly from the company with two 2TB drives and five years of data recovery services has a list price of $1,190, so it's clear that this device is not made for the average user.

If the relatively low capacity of the ioSafe 214 is holding you back, it's also worth noting that the company offers a five bay solution, the ioSafe 1513+, that can also support add-on expansions allowing up to 15 total disks.

Overall, I think the ioSafe 214 is a niche product, but if it's something you need, it's definitely worth the price of admission.

UPDATE: I reached out to ioSafe for clarification on using the drives after a disaster, as well as how DRS works.

The company recommends copying the data to new drives, even though they drives should work fine. It's more of a "better safe than sorry" policy.

Regarding DRS, in the event of a disaster, the company will work with individual users to determine the best course of action, although the preferred method is for ioSafe to recover the data. In any case, ioSafe will provide new hard drives and a new ioSafe 214 if a disaster takes out the original.