I've been using the Essential PH-1 for a couple of years and, although the camera was frustrating, the device itself was solid, looked good, and most importantly, received timely Android updates. I didn't want to buy a new phone, instead planning to wait until this fall to see what the Galaxy Note20 (or whatever it will be called) would bring, since I loved my Galaxy Note 4 so much. Unfortunately, Essential closed down, and with it, the promise of any further updates to the PH-1. Around the same time, the digitizer on my phone started acting wonky, and I realized it was time to buy something new.

Here are my initial impressions after using the device for a day.

I remember when the Note series came out, and every year people said that the phone was too large. The same comments were being said about the Galaxy S20 Ultra, but since I'm a large man, and the Note 4 was a good fit, I didn't think it'd be an issue. 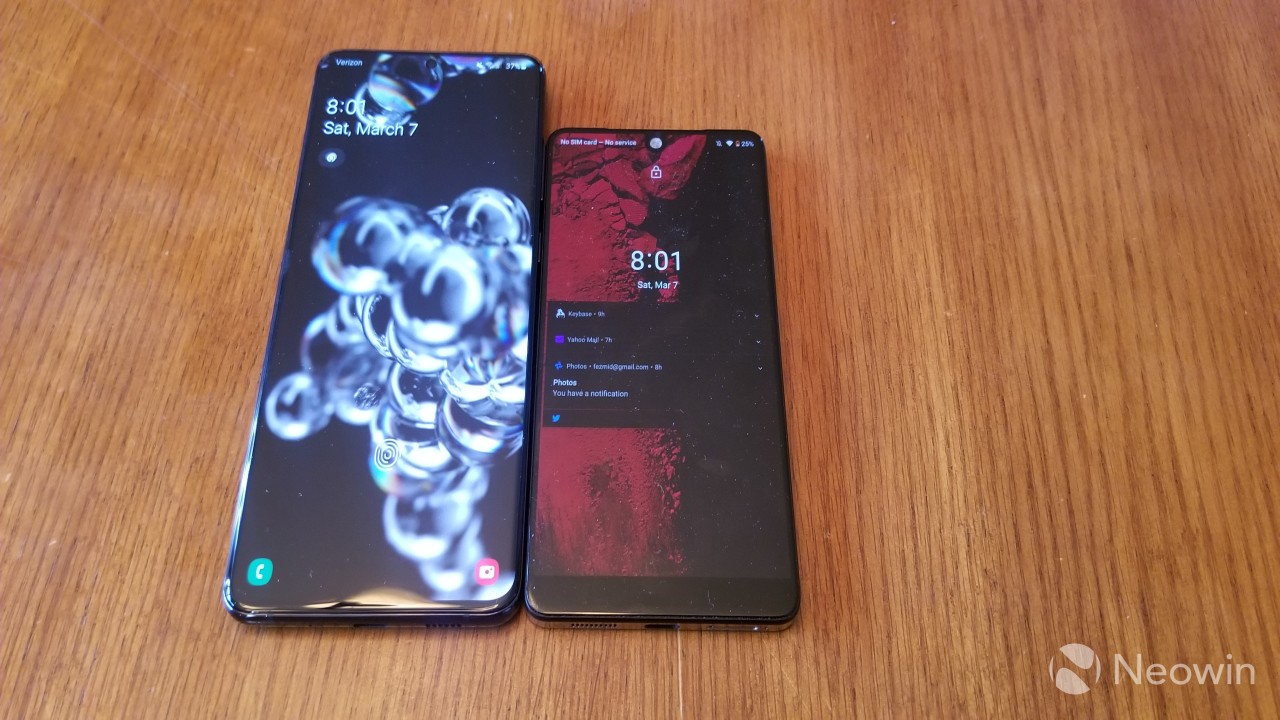 After opening the box, I was shocked at how large the device was, especially when compared to the relatively diminutive Essential PH-1.

Browsing the web or scrolling through Reddit is something that's still easy to do with one hand (assuming you flip the back button to Google's default, as opposed to Samsung's default). However, trying to text is more difficult: It's easy to type your message using swiping motions, but the "send" button is just a little too far away to comfortably reach.

There is a "one handed" mode (under Settings->Advanced Features->One handed mode) that allows you to shrink the screen by pressing the home button. I tried it a few times and it didn't feel very intuitive, but it's something that I'll try to use more in the future.

The screen is silky smooth at 120Hz

I was blown away with how the display looked when I first powered the device on. Colors are rich and vibrant, motion is smooth, and the device just looked amazing. This was at 60Hz. If I hadn't read about the 120Hz mode, I probably wouldn't have known it existed, but since it does, I turned it on to see how it worked, and while I don't think it's a required feature, it does make scrolling or playing games just a little bit nicer. I've seen reports that it drains the battery quicker, and while I haven't done any tests - this is a first impressions article, after all -, I'll say that having it turned on and using the phone for over 24 hours, I still have over a third of the battery remaining, so it's probably a worthwhile feature to enable. 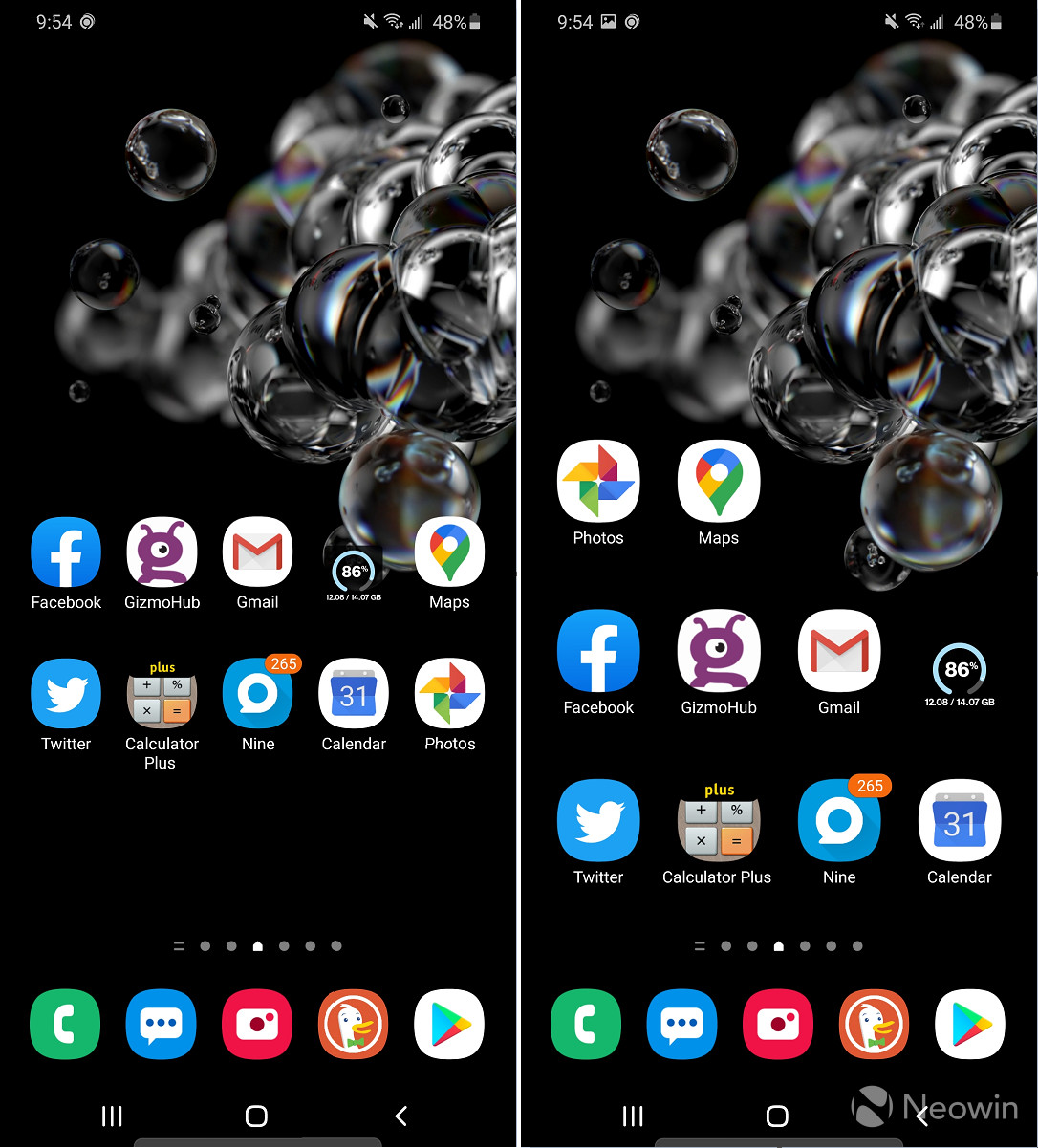 One thing I can't figure out is that why, with such a large screen, Samsung decided to have the default configuration for the home screen to be four icons wide by five icons high, instead of five icons wide by six icons high. The default makes the home screen look so barren due to the large amounts of empty space between the icons, and the icons themselves look comically large. In addition, it took me a while to figure out how to change the setting as it wasn't the most intuitive process: Long press on an empty part of the screen, select "Home screen settings," click "Home screen grid," and then select whether you want 4x5, 4x6, 5x5, or 5x6. Repeat the process for the "Apps screen grid.").

The camera is amazing...

The screen is great, but the main reason I decided to go with the top-of-the-line S20 Ultra was because I had been frustrated with the PH-1 camera for so long, that I wanted the best camera I could get on my new phone. My first impression is that this phone delivers.

If you're reading this, you already know the technical details about the cameras, so I won't rehash them here. 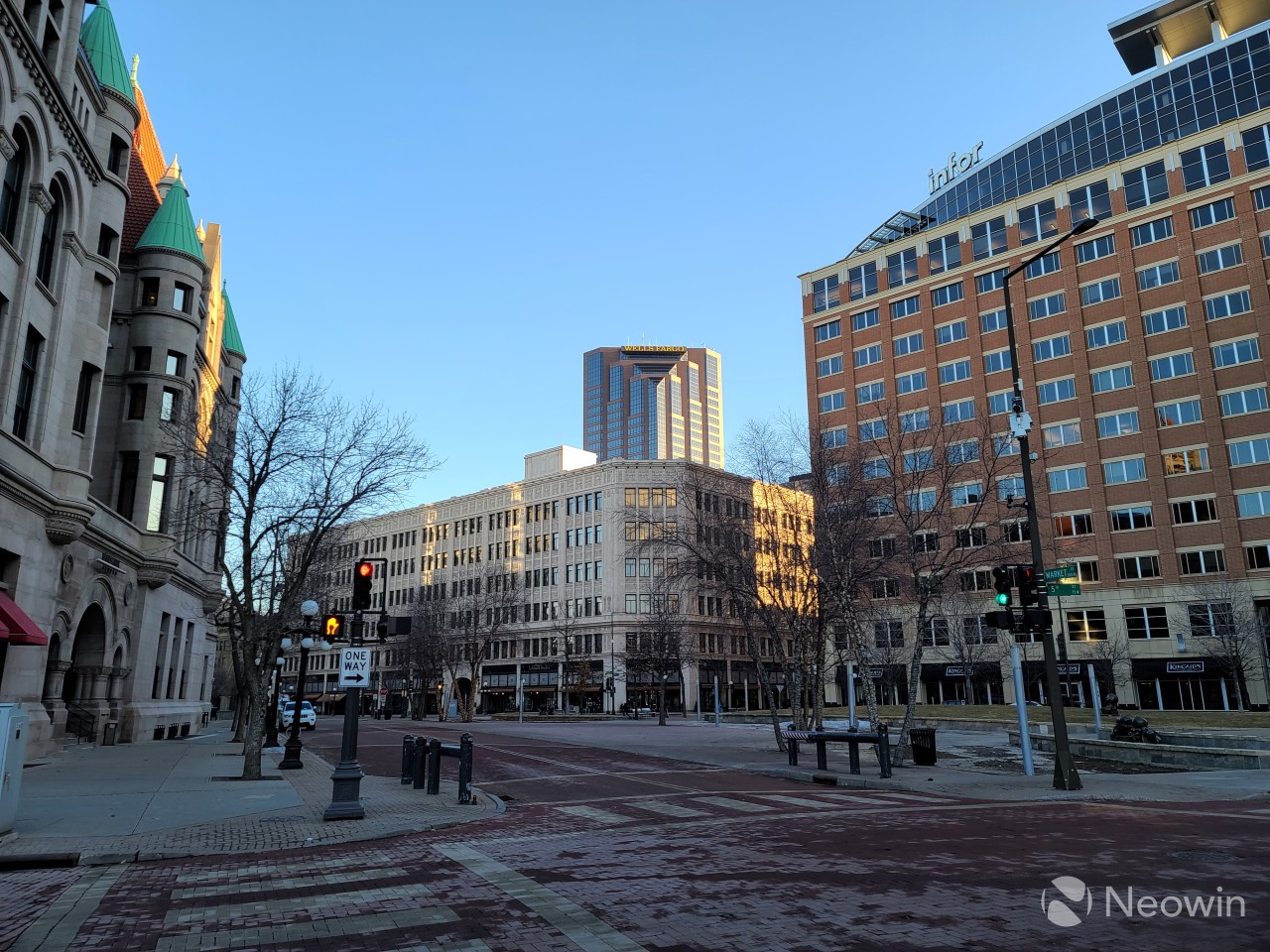 Remember when I said the device is huge? That makes taking photographs in landscape mode challenging because your hand is around less than half the body, making it feel like the phone could fall from your hand when you're trying to zoom in, focus, or press the shutter key. To help combat this problem, Samsung allows for a voice command to take a picture. This is practically required to take a picture with any sort of long zoom in order to avoid camera shake. That said, I did feel a little silly saying "cheese" while walking around downtown St. Paul.

I hope that Samsung adds other voice commands to help. I'd love to be able to say "zoom in" and "zoom out," for example.

Above are three pictures taken from Rice Park in St. Paul, MN. The building is the Landmark Center. All three photos were hand-held, taken from the same spot. The first picture is a wide-angle shot, the second is a normal shot, and the third is a 10x zoom.

While the zoom feature is getting all of the coverage, in my limited time with the Galaxy S20 Ultra, I found that I enjoyed using the wide angle lens far more often. That's not to say the zoom isn't good on the device, because it is, but I just don't feel like the wide angle is getting enough attention.

There's an "AR Zone," which uses augmented reality to put character masks on your face or do other Snapchat-like filters on your photos. My daughter loved playing with the feature, but I'm probably not the target audience for that one.

...but Space Zoom is a little gimmicky...

The one feature that's getting a ton of attention is Space Zoom. While I was skeptical at first, my first impressions are that even if it won't be a feature I use a ton, it could be helpful from time to time, and the picture quality isn't quite as bad as I was expecting.

...and Single Take is very gimmicky

If you haven't heard, Single Take is a mode in the camera that takes a bunch of photos and videos for you automatically. When you're done, you end up with a handful of photos and a handful of short video clips, often with sound effects applied. What you get appears to be random, with this resulting in either a black and white photo one time, a wide angle shot another time, and a six second video clip, complete with a train whistle going off in the background, a third time. It's an odd mode and one I don't see myself using very often, if at all.

The battery life is great

I installed a bunch of applications and did the majority of my configuration on Thursday night, then charged the phone overnight and used it all day Friday. That consisted of normal work email, playing Gems of War for a bit, taking a bunch of pictures, answering work emails, texting friends, and scrolling through Twitter and Reddit. I left the device off the charger overnight, and when I woke up, the battery was still at 35%, with the battery report indicating another 18 hours of juice left. That's pretty impressive, considering my PH-1 battery was degraded to the point at which I frequently had to charge it when I came home from work.

It comes with a pre-installed screen protector

I've never put a case on any of my phones, let alone an actual screen protector, so I was a little confused about why I felt a little ridge around the screen. A few hours later, when I actually looked at the papers that came inside the Galaxy S20 Ultra box, I realized the phone wasn't defective: Samsung pre-installs a screen protector on the device. Apparently, many screen protectors won't work with the fingerprint sensor, so the firm included its own. I never looked into screen protectors, and just assumed they'd degrade the phone experience, but now I realize I was mistaken.

There's so many features

The Galaxy S20 Ultra has a lot of features built in, and I feel like I haven't even scratched the surface yet. For example, when connecting the phone to my PC to transfer the photos, I was helpfully told that I could install a DeX app on my PC. There are things like Bixby Routines, Quick Share, Sync, and Smart View that sound interesting, but I haven't had a chance to try yet.

The Samsung Galaxy S20 Ultra has a lot going for it, but after a day of use, I feel like it's probably not worth the price of $1,400. Sure, the screen is amazing and the cameras are great, but for a few hundred dollars less, the S20+ has most of the same features. Even the Galaxy Note10 is a high quality device, and roughly $450 cheaper.

There's no question that the Galaxy S20 Ultra is a great phone. The device has a massive screen, an amazing array of cameras, lasts all day, and is just fun to use. However the large screen could be a negative for people with smaller hands, so I recommend trying one out before buying it. 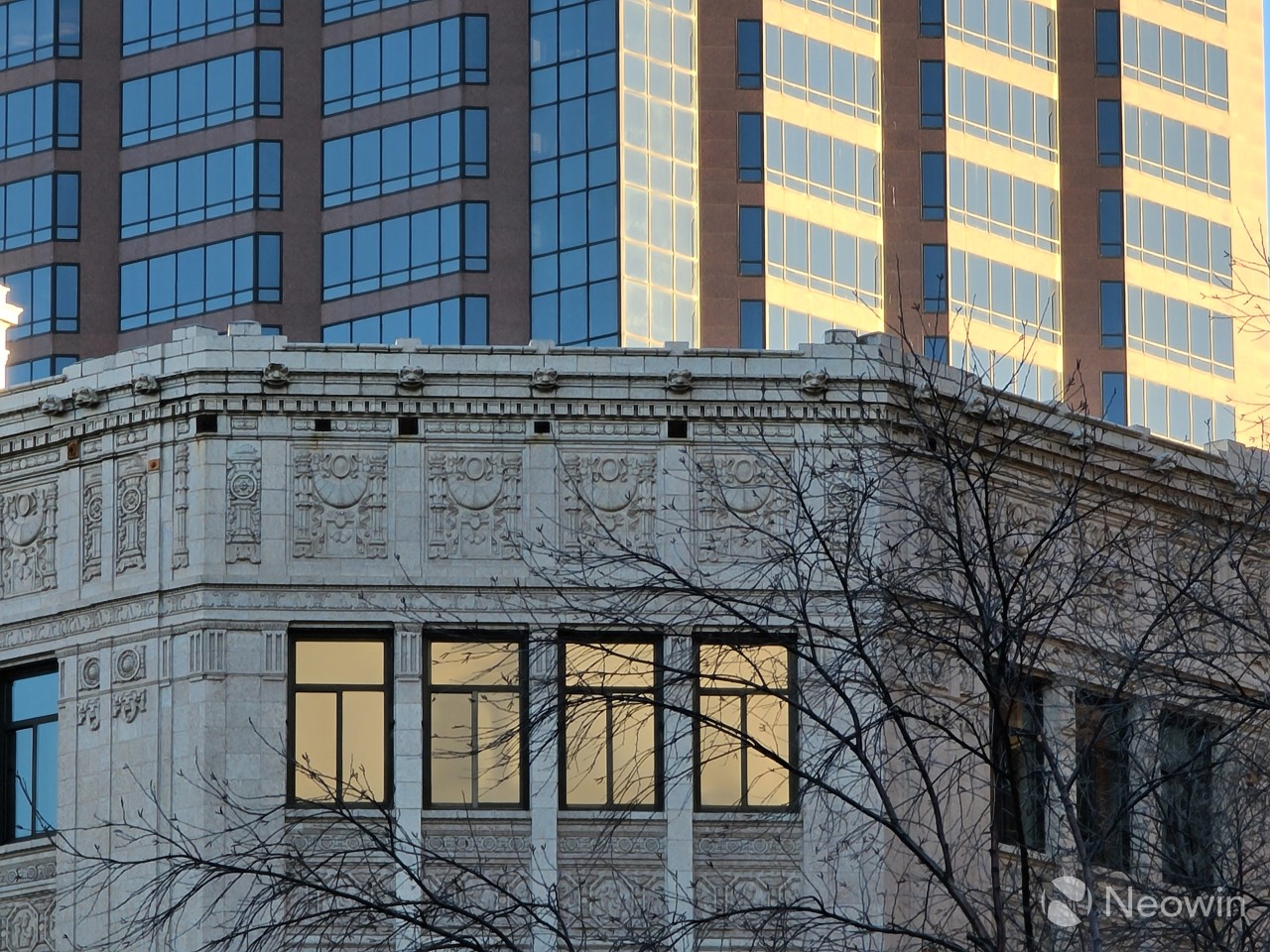 The major negative is the price, and with so many other options, including those offered by Samsung itself, it feels like the S20 Ultra is unnecessarily expensive for a device you could accidentally drop and break on the first day.