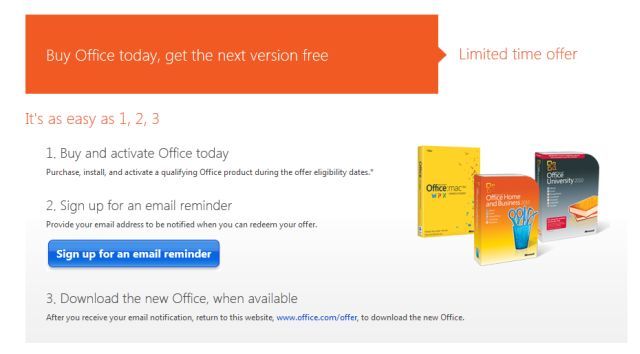 When Microsoft announced earlier this month that the RTM build of Office 2013 was completed, it also revealed a way for people to get the next version of the software suite for free if they bought Office 2010. Now, the company has launched the official Office 2010-2013 offer page.

The website has the details on the offer, which covers people who buy versions of Office 2010 for the PC or Mac between now and April 30, 2013. So far, Microsoft has yet to say specifically when Office 2013 will be made available to the general public, except that it will be made ready sometime in the first quarter of 2013.

Some of the versions allow users to get either the traditional retail version of Office 2013, or a free one year subscription to the online-based Office 365. There are even more details on the conditions of the offer on another Microsoft website, including which current and past Office software releases are not covered by this new upgrade effort.

We have previously reported that anyone who buys a new Windows RT-based hardware product, such as Microsoft's Surface tablet, on or after October 26th would get a "preview" version of Office 2013, with a free update to the final version in 2013. However, there is now word that Microsoft might be updating Office 2013 for Windows RT ahead of schedule to the final version for its launch on Friday,