Android 2.2 Froyo and iPhone 4 with iOS 4 are now available, so the inevitable battery of comparable tests have begun. Ars Technica has taken the initiative to test Javascript performance across operating systems, and the results are not looking good on the Apple side.

SunSpider results were almost 2x slower on Safari for iPhone 4 when compared to Froyo's web browser on a Nexus One, and V8 results were over 4x better on Google's offering. They chalk this up to a JIT update and optimizations included in Froyo, but the results are even more striking when considering the handsets used to conduct the tests. 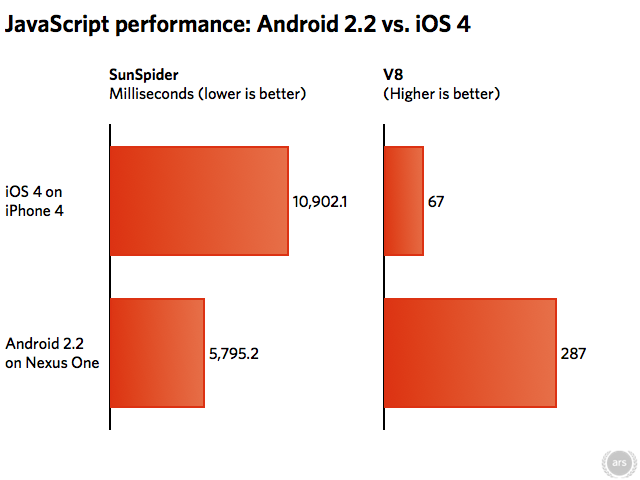 At the announcement of the iPhone 4, Apple touted its use of their A4 chip, which also powers the iPad. It appears that despite the use of a higher powered processor, Apple is still losing the speed race when it comes to Javascript rendering. Although this doesn't look great for Apple's Safari browser on iPhone, it is based on the same Webkit architecture as Android's browser, so these new Javascript runtimes should be able to slot into Apple's offering as well, should they make the effort.