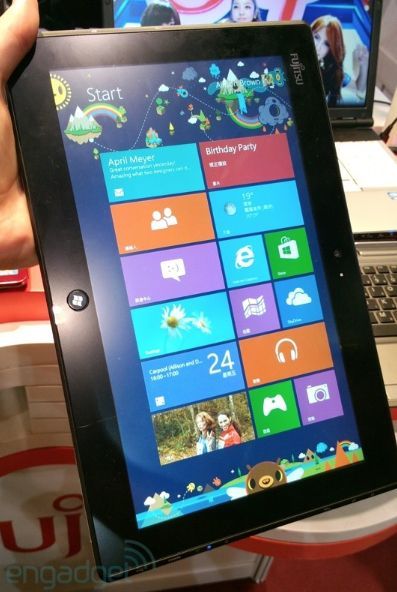 A few months ago, a leaked product roadmap from Fujitsu indicated that the company would have two Windows 8 "slate" devices for launch later this year. Now the company is showing Windows 8 running on two upcoming notebook-tablet hybrid products this week at a trade event on Hong Kong.

Engadget got a chance to go hands-on with both devices, including the 11.6 inch Stylistic Q702 "Quattro", shown above. The device has an Intel Core i5-3427U processor, 4 GB of RAM, a 256 SSD, front and back cameras and a fingerprint scanner. The article says that while the tablet portion weights 1.88 pounds, the detachable keyboard makes the product a tad too heavy.

The other product that was shown was a LifeBook T902 "Tercel". This is a larger, 13.3 inch device with a more powerful Intel Core i7-3520M processor, along with 8 GB of RAM, a 500 GB hard drive, and even a Blu-ray player. Even though it was running Windows 8, the article makes it sound like the "Tercel" could be coming out for Windows 7 first; the product had a Windows 7 certification label on it.

There's no word on when these two Fujitsu hybrids will be launched, nor what their price points will be like.