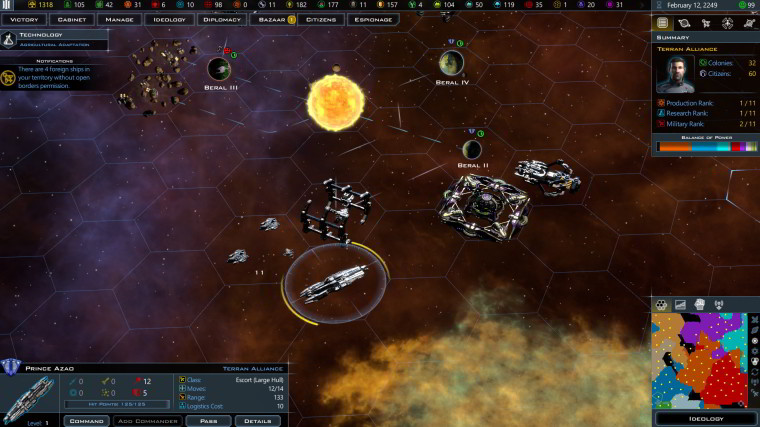 Stardock's 4X turn-based strategy title Galactic Civilizations III is getting a new expansion, called simply Intrigue. Of course, that is a perfect title, given that it adds a layer of politics and bureaucracy to the game.

Here's a synopsis of what the Intrigue will offer when it released later this spring:

Strategize, synergize, and hire the best people for the job! The new opening screen will let you set up your civilization by choosing who to hire from a list of provided candidates. Choosing characters that work well with your strategy will grant an important advantage against opponents.

Choose Your Form of Government

You’ll wish you’d paid more attention in your high school government classes! Each style of governing has advantages and disadvantages. You’ll be able to choose (and research) various forms of government to determine which works best for your playstyle and strategy.

Check out a whole slew of "new!" Awesome new ship modules and devastating weapons, unique planetary improvements, and technologies designed to improve your government are packed in Intrigue. All of these new additions will require galactic resources, which is what makes the Galactic Market so important!

Shop in the Updated Galactic Bazaar

There’s always a good deal at the Bazaar! Well, maybe not always, but that’s what they’ll tell you, anyway. Mercenaries aren’t the only thing available here anymore. You’ll be able to purchase (and sell!) additional resources now - but, how steep the price gets depends entirely on how much is (or isn’t) available.

Put your colonies on auto-pilot! These subject-states will do as they’re told without you having to lift a finger. The planets will be permanently allied but run by the AI, which reduces micromanagement so you can focus on other things.

Keep Up With Current Events Using the Galactic News Network

In space, there is no biased reporting - that’s because we’ve hired a robot to handle it! Check the news to monitor who’s allying with who, who’s declared war on each other, and many other activities that are going on across the galaxy.

The expansion can be pre-ordered now for $14.99 through the Stardock store or Steam.