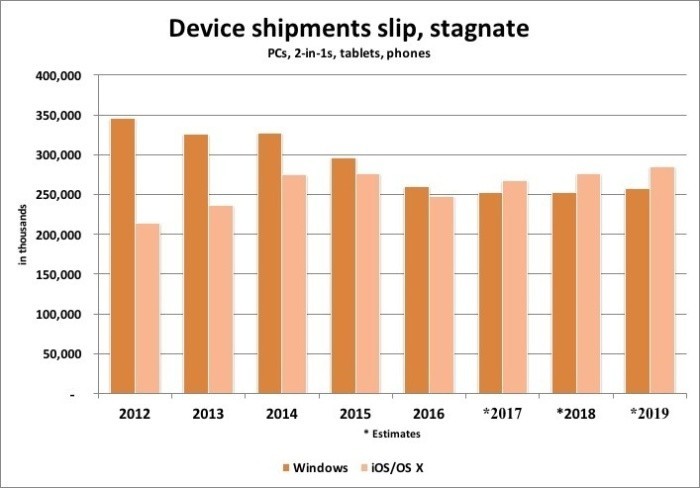 After decades of leadership in device shipments, Microsoft is set to lose its place to Apple in 2017, according to a Gartner's market prediction. The forecast takes into account all sorts of devices running Windows, OS X (now macOS) or iOS, from PCs and 2-in-1s to tablets and phones.

As predicted by Gartner last year, worldwide device shipments are set to fall and then to stagnate until at least 2019. According to Ranjit Atwal, Gartner Analyst, in a statement last Wednesday:

"The global devices market is stagnating. Mobile phone shipments are only growing in emerging Asia/Pacific markets, and the PC market is just reaching the bottom of its decline."

In addition, Atwal pointed out that consumers have few reasons to buy new traditional devices, mainly because of the current slower rate of innovation. This trend is also reflecting on the average selling prices which are starting to stagnate, according to Atwal.

In the same press release, Gartner stated that nearly seven billion PCs, tablets and phones were in use in the world by the end of last year.