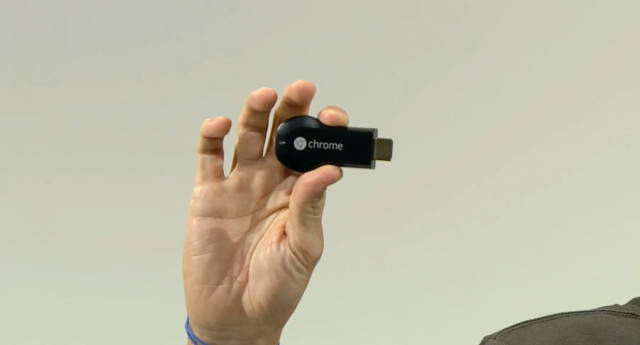 After the embarrassing failure of the Nexus Q, Google has introduced another bid to enter the living room with Chromecast, a 2 inch dongle connected by HDMI to any TV. After connecting the device to wi-fi, users just need to open an app such as YouTube from their phone or tablet, and have it stream directly to the TV. The phone acts as a remote, controlling volume and other settings. All streaming also happens in the background, allowing the owner of the mobile device to continue browsing separately, or even put the device to sleep.

In addition to streaming from YouTube, other apps can make use of Chromecast. For example, Netflix, who has already made use of the allegedly simple Google Cast SDK. The feature works with both iOS and Android,and if using Chrome on Windows, Mac or a Chromebook, full webpages can be mirrored.

Google has emphasized how Chromecast streams video from the cloud directly, so your phone or tablet will use minimal battery life, as it isn't continually in use. Additionally, Chromecast isn't tied to any specific device, meaning that if someone leaves the house with one phone, you can pick up control with another, which will detect the local TV. Devices also remain in sync, so if one person scrubs through a video on their Nexus 4, it will instantly show the change on someone else's iPhone.

Chromecast is available on Google Play for $35 today in the US with 3 free months of Netflix; availability in other countries will follow in coming weeks.