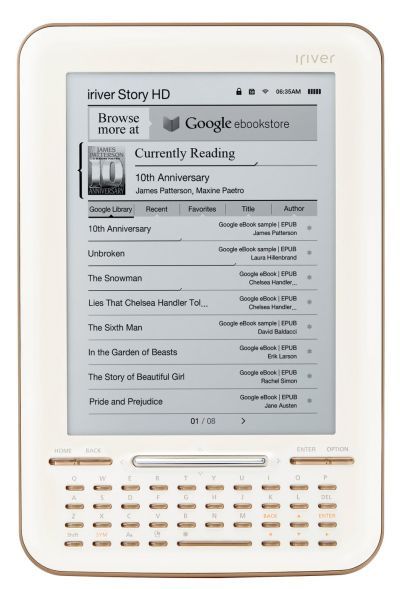 Google's eBooks format for offering downloadable books is getting its first e-Reader product that's made specifically for the format. Today Google announced, via its blog site, that starting this Sunday, Target stores will begin to sell the iriver Story HD e-reader. The product, which will cost $139.99, joins the ever growing list of e-Reader devices on the market that also compete, in a way, with more comprehensive tablets such as Apple's iPad.

The iriver Story HD has a WiFi antenna which can be used to download books to the device. The Google eBooks format has over 3 million books available for free and hundreds of thousands of other books available to purchase. The device also has a QWERTY style keyboard on the bottom. Google hints that there are more devices that will be compatible with the Google eBooks format in the works.

Most e-Reader devices are cheaper than tablets as well as smaller and lighter as they are dedicated mostly to just downloading and reading books. Amazon.com has led the way in this market with the Kindle, which now has three different versions, including one that runs with ads on the bottom of the screen. However, a recent study claims that sales of the Kindle have been surpassed by the Nook Color from Amazon's biggest rival in the e-Reader space, bookseller Barnes and Noble. The $250 Nook Color is more than just an e-Reader; it also has some entertainment apps such as Angry Birds along with a Flash supported web browser.