Twitter is known for it's ability to keep the world updated in real time about events around the globe, but only if you're following the right people, or connected to Twitter at the right time. But what if you could go back in time and experience the social media response to events as the events happen, in real-time? You could go back to the days last year of the protests in Iran, and watch the Twitter-sphere erupt. You could watch events unfold as knowledge of the  deadly magnitude of the earthquake in Haiti spread through the digital world at the speed of social media. You could simply relive the events of a concert you attended 3 years ago, a la Facebook status updates. The list is endless.

After the successful launch and growth of Google's Real-Time Search, the ubiquitous company has announced via the Google Official Blog yet another way to interact with social media search results. If you're in the 'latest' search results option in Google, you'll see a timeline on top of your search results. You can manipulate the timeline to find the exact moments you want to replay. 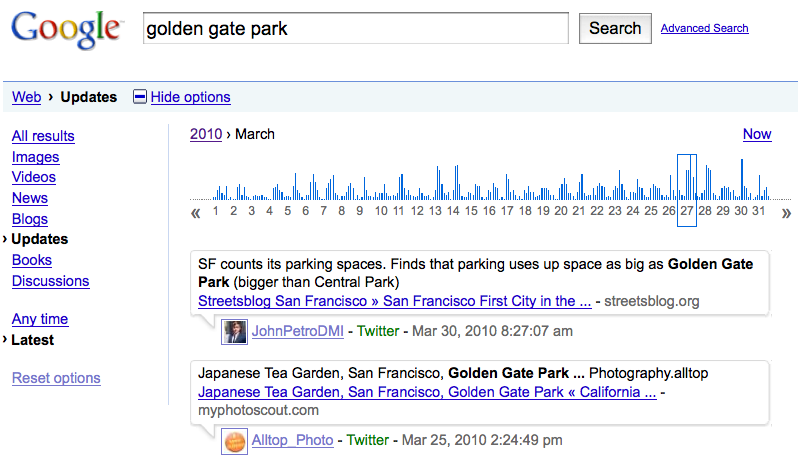 The service is starting to roll out today, so expect it to magically appear within a few days. If you want it now, Google provides a nifty (if politically biased) link to help get you started. Initially, the service will be English-only, and for tweets going back to February 11th, 2010. This will be greatly expanded in the future to include all Twitter updated from March, 2006, when the first tweet was tweeted (twitted? twittered?), and ostensibly, other updates from social networks like Facebook and MySpace.