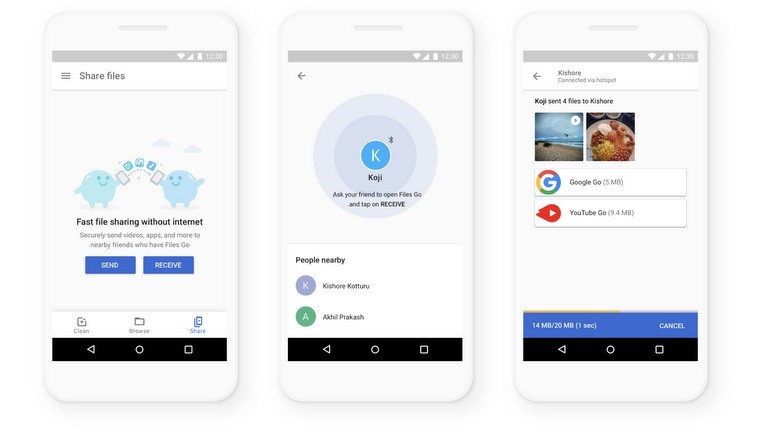 Google released the Files Go app late last year as part of its efforts to bring a more lightweight experience to users with lower-end devices in regions with limited connectivity, which also include the introduction of Android Go.

Files Go is a file management app that helps users save space on their device by backing up files to Google Drive, finding duplicate files, very large videos and more, but it also allows users to transfer files locally through a wireless connection, and this feature is the main focus of the update announced today.

After today's update, users will now see a dedicated Share tab, which offers a new "simplified and smoother" interface, but also significantly increased transfer speeds. For starters, phones will connect much faster with one another, now averaging at just five seconds.

But the transfers themselves are also significantly faster now, with Google claiming speeds of up to 490 MB/s - four times the speed that was previously offered. This is because Files Go will now choose the best available method for sending files, such as 5GHz Wi-Fi Direct, to ensure the highest possible speeds.

Google is also making file transfers more secure by helping you make sure you're connected to the right device, and the transfers will also now be encrypted, which should help keep malicious bystanders away from your files.

Today's announcements should be pretty exciting for those already using the app, but it could also help bring in more users to the app. If you're one of the latter, you can download Files Go from the Play Store here.