Google Maps, a widely accepted and relied on tool for obtaining directions to unknown locations, or even to browse towns for fun, somehow wiped the popular city of Sunrise, Florida right off of their map. 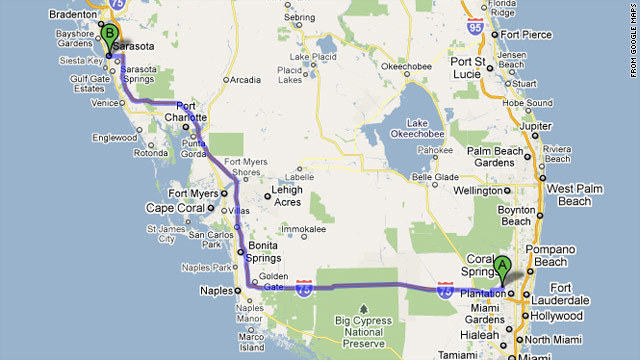 Point A shows the location of Sunrise, Florida, Point B is where users were directed to. Image Source: cnn.com

Instead of seekers for the destination being shown directions to Sunrise, Florida, they were redirected to Sarasota, Florida. The major problem with this is that it takes users across the state, to the opposite coast and 200 miles away from their intended destination.

Not only was the city lost, but also references to public entities and city hall; virtually all information about the city host to 90,000 people, a major National Hockey League team, and one of the largest malls in the United States, according to CNN.

The city's mayor, curious as to why the city was not performing as well economically as in the past, then finding out that the city wasn't even listed - sent a map of the city to Google in hope of solving the problem. This was not the only town lost recently, others include "La Jolla, California; Rogers, Minnesota; Wickliffe, Ohio; Woodstock, Virginia, and Imperial Beach, California" reported Search Engine Land, a site that keeps up to date with what Google is up to.

One claim is that the reason for these discrepancies is due to Google switching their source for who provides them map data for their Google Maps service. During this switch it is thought that either through a glitch in the system, or poor indexing, that certain cities were simply wiped off the map.

Since the public outcry from Sunrise, Florida, Google has restored the town to their map application, as well as the aforementioned cities. Many were lost for at least a month during the summer, however maybe with these examples Google will take more care of their service from now on.