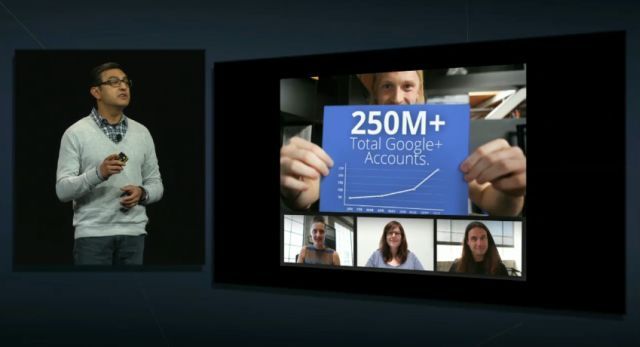 Today, during the keynote address for the Google I/O developer conference, the company gave an update on its Google+ social networking service. Google launched Google+ without warning nearly a year ago (the launch actually happened on June 28th, 2011). Google revealed today that a year later, Google+ now has over 250 million accounts.

However, only about 150 million of those accounts are currently active, with about 50 percent of that number signing in every day. Google also revealed that Google+ users are accessing the service via the mobile app more than they are on the Google+ website. All in all, Facebook must not be too worried.

Google also announced a number of other additions and improvements to Google+. One of them is a dedicated app for Android tablets, with a version for the iPad coming soon (no word on a Windows 8 Metro version). The Android phone app is getting some improvements as well, including a smaller version of the new tablet interface.

There's also the addition of Google+ Events. This will allow users to invite others to join a special event (kind of like what Evite offers). Once the event actually begins, Google+ Events can also turn on what the company calls "party mode" where all of the individual's photos taken during the event are automatically uploaded to a special page. Other people invited to the event can also have their pictures from the event posted to the same page.