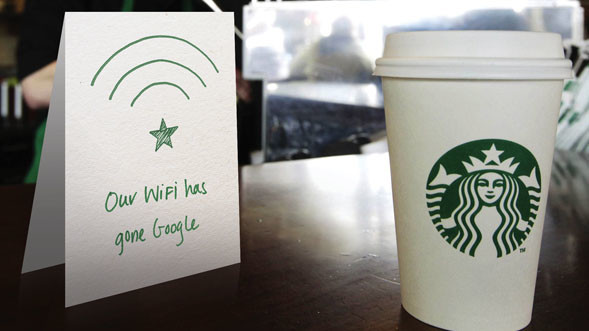 Less than a year ago, Google launched its first 1 Gbps Internet service in the Kansas City, Kansas-Missouri area. Since then, Google has announced it will be bringing the same service to Austin, Texas and Provo, Utah. Today, Google revealed yet another Internet connection project, but this time it will offer service all over the US.

In a post on Google's blog site, it announced that it will be serving the many customers that go to Starbucks for coffee in the US with free WiFi. Over the next 18 months, the over 7,000 Starbucks stores in the US will switch over from their current service provided by AT&T to Google's network. Google is saying that the WiFi connection will be up to 10 times faster than the current AT&T solution (which has to sting AT&T a little). If you happen to live in a city that Google Fiber services, that WiFi connection at Starbucks could be up to 100 times faster.

In the blog post, Google's general manager of Google Access, Kevin Lo, stated, "Google has long invested in helping the Internet grow stronger, including projects to make Internet access speedier, more affordable, and more widely available." He adds that many communities have depended on the free WiFi that Starbucks offers, either to just do schoolwork or to communicate with others in times of disaster.

Terms of this new Google-Starbucks partnership were not disclosed. However, the fact that Google is planning to offer much faster net access at Starbucks locations in the US could be a Trojan Horse method to see if there's a bigger audience for the super fast Google Fiber service in other parts of the country.