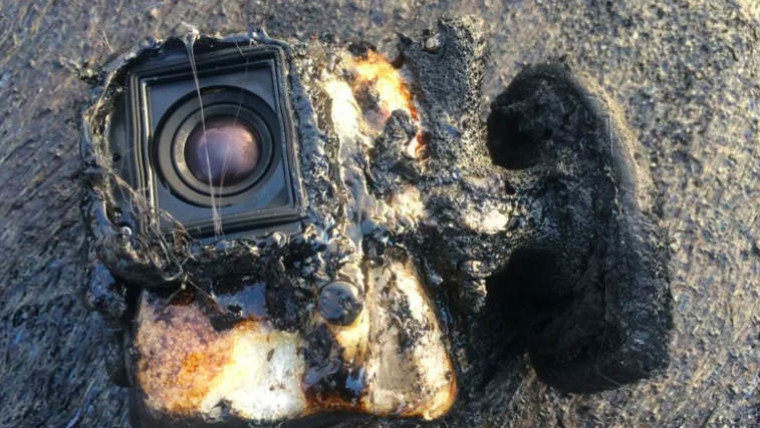 Erik Storm was busy telling his tour group a story when he suddenly remembered that he had left his GoPro in the path of some lava that was creeping its way into a small crack in the ground. By the time he had got to his camera the lava had already engulfed it, but he quickly managed to fish it out of the liquid rock using a hammer.

Upon his return home, he began chipping away at the now cooled lava that encased the camera. To his surprise, as he freed it, he noticed the Wi-Fi light was still blinking. Miraculously the camera had survived, the camera's SD card still worked, it held the recording of the whole ordeal, and Erik was still able to use the camera. Although he says it didn't work quite as well as before, which can be expected as the camera resembled a horribly burnt lasagna once it came out of the lava.

As can be seen in the above video, the camera managed to record the slow crawl of the lava right up until the camera itself eventually burst into flames and was consumed in molten rock.

GoPro, the company, has been going through a number of difficulties in recent years. It has begun to experiment with new types of products, and even though the camera in this instance did have an additional protective casing this feat is nonetheless something which shows the robustness of its famous action cameras.