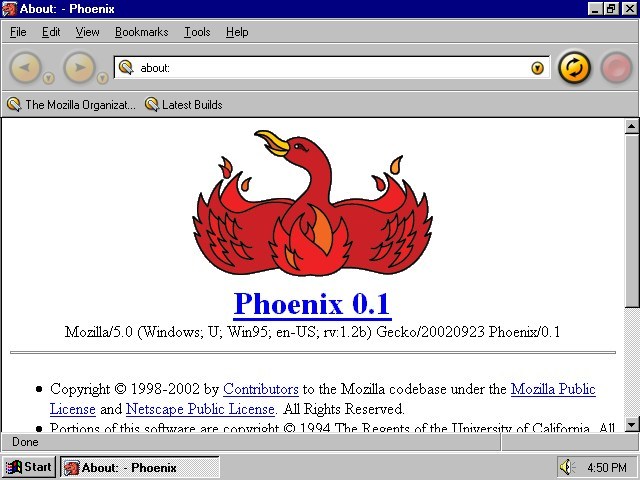 Ten years (and a day) ago on the 23rd of September 2002, Phoenix 0.1 was released. Several months later, that name was dropped in favor of Firebird, because BIOS manufacturer Phoenix Technologies didn't like to see its name on Mozilla's open-source browser. The community didn't like Firebird either, because there was and still is a database server carrying the same name.

So in the beginning of 2004, Mozilla changed the name to Firefox. By the end of that year, version 1.0 was released together with a full-page advertisement in the New York Times.

Firefox became quite popular thanks to Microsoft's Internet Explorer 6, which didn't receive significant updates for many years. Firefox however introduced a lot of people to tabs, RSS-feeds in the bookmarks bar, themes and extensions. In February 2008, Firefox had been downloaded 500 million times and established a record with version 3.0 several months later, with the “Most Downloads of a Software Application in 24 Hours,” according to Guinness World Records.

By the end of 2011, Google Chrome surpassed Firefox in terms of global usage share. Today, approximately 23% of all desktop users browse the internet with Firefox, making it the third most used browser according to StatCounter. Internet Explorer comes in second with 33% and Google Chrome comes in first with 34%.