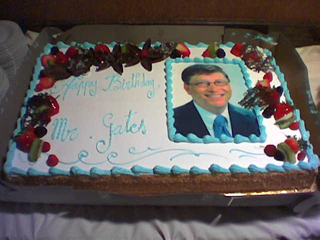 William Henry Gates, III was born on October 28, 1955 in Seattle, Washington, making him 57 years old today. As everyone knows, Bill Gates partnered with Paul Allen to form Microsoft in 1975 when he was just 20 years old. In the early days, he reviewed every line of code before sending it out the door for he was not only a great businessman, but a strong technical mind as well. He stepped down as Microsoft’s CEO in 2000 and retired from the company in 2008.

Gates is one of technologies forefathers and could debatably be considered the most important. Not only did he bring computers to the masses, he also saved Apple from destruction with a $150 million dollar lifeline. While some debate that Microsoft settled due to patent disputes, the facts are that Apple was cash-strapped and Gates could’ve “gone thermonuclear” in court had he wanted to.

While Bill doesn’t have much involvement with Microsoft anymore, he’s doing great things in the world with the Bill and Melinda Gates Foundation. We hope that he can sit back and enjoy today, maybe while using a Surface running Windows RT. Happy Birthday, Mr. Gates!