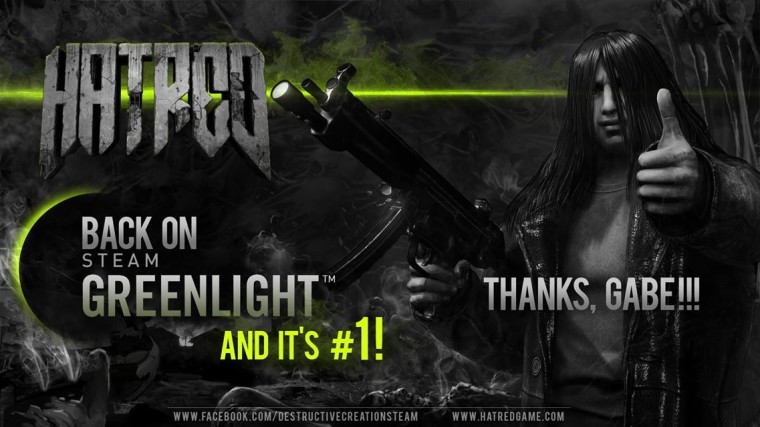 Hatred is an isometric shooting game revolving around the life of a sociopath whose motive in life is to mercilessly kill people without any apparent reason. The game's trailer received mixed reactions from viewers considering the dark and disconcerting theme. Developed by Destructive Creations, the game made its way to Steam Greenlight yesterday, but was almost immediately removed by Valve who weren't at all too pleased by the game's theme, stating that:

This rather harsh move ignited criticism against Steam's decision, considering that the game had received 13,148 up votes in just a couple of hours becoming the 7th most wanted Greenlight game on Steam. In response, the developers of the game issued a public statement saying that they respect Valve's decision but also questioned the reasoning behind the publication of games like Postal and Manhunt on the digital distribution service.

However, after all the criticism regarding Steam's arguably hypocritical behavior, the game has now reappeared on Steam Greenlight following an apology from Gabe Newell:

Yesterday I heard that we were taking Hatred down from Greenlight. Since I wasn’t up to speed, I asked around internally to find out why we had done that. It turns out that it wasn’t a good decision, and we’ll be putting Hatred back up. My apologies to you and your team. Steam is about creating tools for content creators and customers.

Good luck with your game.

Following its republication on the Steam Greenlight page due to Gabe's interference, the rather controversial game has received more than 27,000 up votes, becoming the most wanted Greenlight game, indicating that the community is considerably excited regarding the publication of the game which is slated for a Q2 2015 release.

Meanwhile, you can watch its trailer below:

[Warning: This trailer might be too graphic for minors]