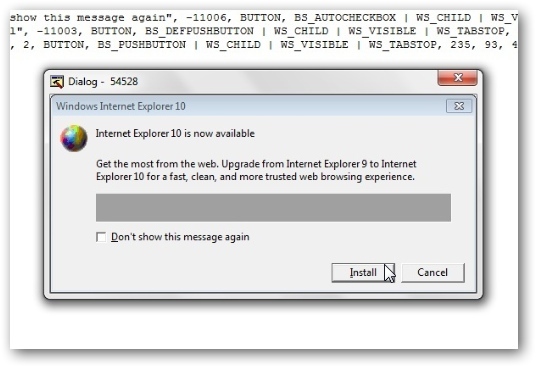 Russian website TheVista.ru has uncovered a dialogue box that references IE10, and Windows8beta.com has managed to find an English language version of the message. It reads:

Microsoft appears to be using a placeholder image for the logo until the next version's logo has been decided. Other than that, the dialogue reveals very little else, but it does suggest that Microsoft is planning to give IE its own upgrade system separate from Windows Update.

Neowin has previously reported on rumours that IE10 will come bundled with Windows 8, and it looks like Microsoft has already mapped out a way to make transitions from IE9 to IE10 as painless as possible, showing Microsoft's forward planning in the browser market. IE9 introduced considerable improvements in terms of standards support as well as speed, and it looks like Microsoft is trying not to rest on its laurels as with IE6. The browser market grows more and more competitive daily, and Microsoft will need to try and keep one step ahead of the competition if it hopes to stay in the running.