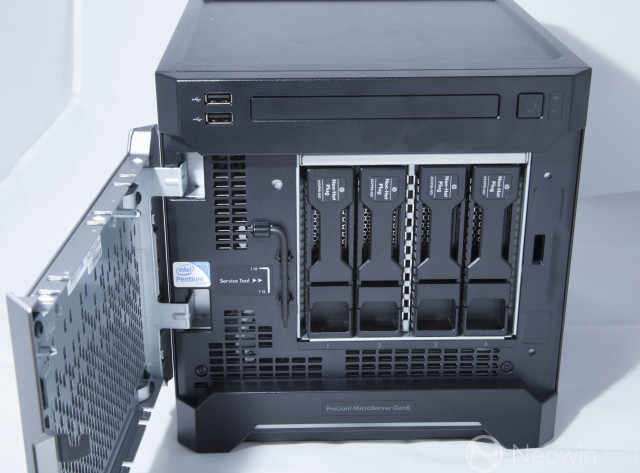 A couple of weeks ago, we asked what you would do with an HP ProLiant MicroServer Gen8, and the responses were overwhelming. Javik wanted to use one for file storage and automatic backups for a charity he works for. NeoTrunks plans on installing virtualization software and then build VMs to test new releases, serve some files, and maybe host a game server or two. And RottGutt wants to rub it and pet it and squeeze it and strike its bill and rub its pretty feathers (feathers not included...). The breadth of responses shows how versatile HP's line of ProLiant MicroServers are, and the latest version, the Gen8, just ups the game once again.

We received our HP ProLiant Microserver Gen8 today and while we haven't had time to test it out yet, we did manage to snap a lot of photos of this beauty. The first thing you'll notice is the size: This small cube can fit practically anywhere in your home or office and never be observed. Indeed, we did power the box up and couldn't even hear the fans over our main watercooled workstation. The inside of the server can be easily accessed by unscrewing the two thumbscrews on the back, and then lifting the case away. Inside is pretty packed with two DIMM slots, a CPU on the mainboard, and an unused PCIe x16 slot for expansion. There's also an iLO chip on the mainboard and a passive heatsink on the CPU, There are four cold-swappable drive bays behind the silver door on the front of the server, a handful of USB ports on the back, and a standard video output on the back.

We hope to finish our in-depth review of the device in the middle of October, with the giveaway sometime in early November. While you're waiting for our review and details on the giveaway, take a look at the pictures and let us know your initial thoughts and if there are any tests you'd like us to run during our review!

UPDATE: Just to avoid confusion, some of the pictures show the optional HP PS1810-8G Switch on top.  It's a managed switch that apparently lets you do things like bond ports together so you can add redundancy and extra bandwidth to the network. We'll be reviewing that as well (perhaps separately).