If you use Windows 8, or indeed the preview version of Windows 8.1, you know that when you close a Modern app you go right to the Start screen. There's no option that allows people to close those apps and return to the desktop UI. Now it looks like Microsoft has added that small but helpful option in the RTM build of Windows 8.1

As reported by McAkins Online, users can move the cursor to an empty part of the taskbar on the desktop in Windows 8.1 RTM and right-click to bring up a menu that includes the "Properties" option. Clicking on that brings up several tabs, including Navigation. The Navigation tab, when selected, brings up a number of check box options. 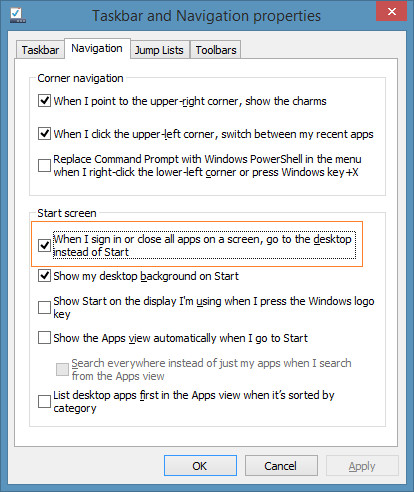 Perhaps Microsoft will make a small change and separate the two options by the time Windows 8.1 is officially released on Oct. 18.