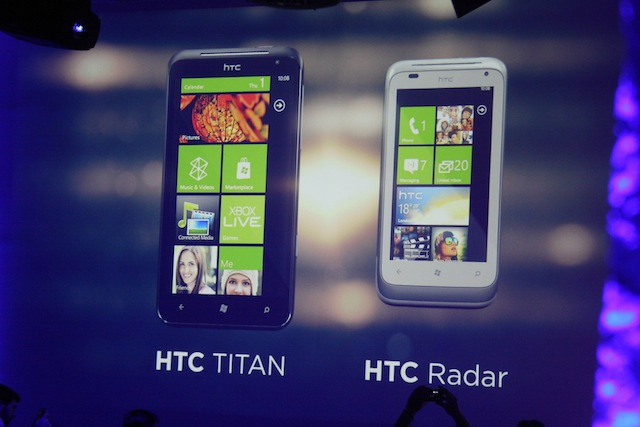 Unlike the leaked documents suggested, HTC's newest offerings were not called the Eternity and Omega. At a London event today, HTC officially took the wraps of what are officially known as the Titan and Radar. Boasting an impressive array of specs, the Titan looks to be HTC's new flagship phone, with the Radar satisfying the more budget-minded consumer. Neither phones have price tags yet, though HTC are promising an October release for both.

The Radar has definitely been designed with photo taking in mind. An f/2.2 28mm lens adorns the back, and those looking to get the perfect shot as quickly as possible will be pleased to see the appearance of a dedicated camera button. The Radar is also capable of burst photography, as well as panoramic stitching. Anyone used to taking photos of large scenes will be sure to appreciate a panorama stitcher built in, although there's always the possibility of Windows Phone developers one-upping HTC with more refined third-party apps.

What really stole the show was the HTC Titan. An audible gasp filled the room when unveiled, and rightly so. The phone is 9.9mm thick while also featuring a 4.7 inch screen. A dual LED flash makes photos appear crystal clear, which coupled with DLNA support and a large screen makes the phone a notable improvement for photo capture compared to its Radar brother.

Stay tuned for an exclusive hands-on with both devices.