As the week’s pass and Microsoft continues to develop Windows 8, the amount of leaked builds continues to rise. Just today Neowin reported that Windows 8 will have a metro-style PDF reader and earlier this week we reported that it may also come with a ribbon UI, similarly to that of which they have in their Office products. Well today, a little more information has been revealed thanks to Rafael Rivera and Paul Thurrott.

From previous leaks we can see that Microsoft is heading towards a metro-like, tiles-based GUI instead of carrying on with developing Aero and Aero Lite. We have seen an example of this type of GUI with Microsoft’s Windows Phone 7 operating system and it seems that we may seem something very similar with Windows 8. They have named their new UI, Immersive and up to now no one has been able to unlock the features in previous leaked versions. It's likely that the new GUI is for tablet based form factors, and won't be on the desktop. This application, like previous Windows 8 apps operates at 640 x 480 and doesn’t come with a resize feature. Rafael noted that the likelihood is that the application is designed to run full screen and the limitations are because they’re running outside its ‘intended native Immersive environment.’

This most recent leak gives us a speculative idea of how the Immersive UI works which can be seen in a Windows 8 styled Internet Explorer on a tablet PC. It appears that it uses the IE 9 rendering engine but works like WP7’s IE. 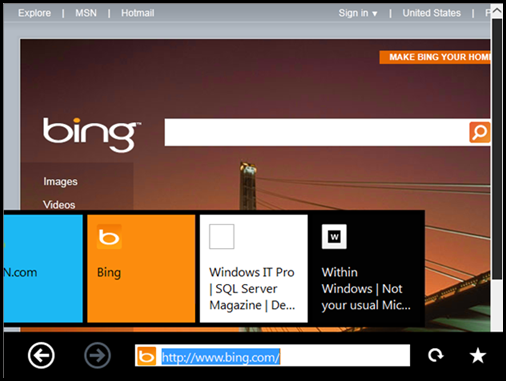 The screenshots aren’t much but we’re told that the browser does work. Taking another page from WP7, the browsing history works and appears almost the same with the slight exception of having site colorization functionality taken from IE9. It appears Microsoft is pushing to unify their mobile devices to use the same interface.