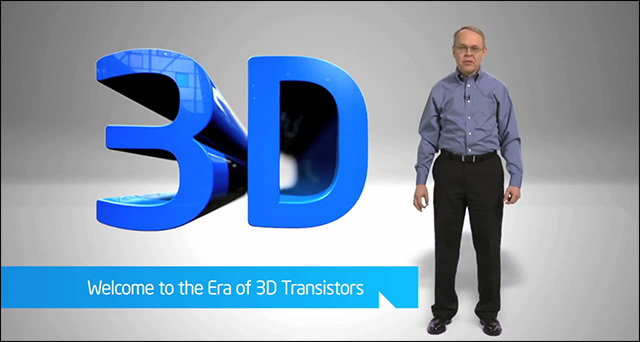 Transistors. You won't find a single piece of electronics without them today. If you look at the processors in computers and mobile devices, they've all managed to continue to shrink, year by year, using more transistors in a smaller area and are also using less power and giving off less heat. Doubling the amount of components used on integrated circuits every year, or now two years, was what Gordon Moore had in mind back in 1965.

However, the Intel co-founder probably thought that at some point, there had to be some realistic upper limit. We've gone from transistors that were the size of large light bulbs to being only 33 nanometers wide in Intel's second-generation Core chips. To go smaller than 32 nm would require a new way away from manufacturing transistors on a flat two-dimensional planar surface.

Fortunately for Moore, he could trust his company to take transistor technology to the next level. Make it 3D! And so Intel has introduced the world's first processors to take advantage of 3D transistors, which they named "Tri-Gate." Sample chips have been already produced and demonstrated in Intel's labs. This new technology will be introduced next year on Intel's 22 nm "Ivy Bridge" processors.

For those who need a further explanation of what this use of "3D" really means (definitely nothing to do with graphics), Intel has produced an entertaining video, which may be seen below (courtesy of Engadget).