Day 1 Studios first gained fame among gamers for the two titles in the MechAssault series for publisher Microsoft. Both games were released for the original Xbox console and showcased a lot of property destruction as players piloted mechs in fast paced combat and multiplayer battles. Since then, Day 1 has worked on other types of games such as the third person action game Fracture (for LucasArts) and more recently the horror themed FPS F.E.A.R. 3 (for Warner Bros. Interactive).

A few weeks ago, Day 1 Studios announced it was returning to its roots with Reign of Thunder. Like the MechAssault series, this new game involves players in mechs battling it out. However this time the game is based on Day 1's original concepts, rather than being based on the long running Battlemech/Mechwarrior franchise. It's also being made for the PC as a free-to-play title with lots of online features.

We got to ask Day 1 Studios co-founder and CEO Denny Thorley some questions about Reign of Thunder, which at the moment doesn't have a announced launch date.

First, why did Day 1 Studios want to return to the mech-themed action game genre after such a long time?

Ever since we shipped MechAssault 2 we’ve been eager to return to the Mech genre and really take advantage of current generation hardware.  Recently a window of opportunity to do this presented itself so we’ve jumped into this game with incredible enthusiasm.  It’s been something we’ve talked about doing for a while and now we’re finally able to bring this opportunity to life.

Was there any attempt by Day 1 Studios to get an official Mechwarrior/Battlemech game license?

One of our goals for Reign of Thunder was to create a property we could have ownership of.  The other universes are well developed, but the next step for Day 1 Studios as an organization was to create something we own and have control over.  Reign of Thunder was the next logical step in our business plans. Additionally, we wanted to take the game in a creative direction that just would fit some of the licensed products.

What can you tell us about the fictional back story for Reign of Thunder?

We haven’t released many details about story yet, but there will be more information coming soon.  That said, you will be seeing many different, unique factions all competing in some very interesting locales.

What sort of customization features will be put into the mechs in the game?

There are a great deal of options that will be implemented into Reign of Thunder because we realize people don’t want to invest time in just any Mech, they want to invest it in theirs.  Players will have control over Mech size and weapon loadout, which faction their allegiances lie with, how their Mech looks, and what skills their Pilot brings to battle.  The more time a player spends with the game the more unique and personalized their experience will become.

Will the game be multiplayer only or will there be a single player component as well?

At the moment the bulk of the gameplay experience revolves around online competition.  There is a training mode to allow players a chance to familiarize themselves with how their Mech controls and get to know the maps.  At the moment all of our efforts are being directed towards the online competitive experience.

How will multiplayer matches be handled?

As far as balancing goes there are several factors that determine how teams are sorted.  Faction Allegiance, Player Rank, and battle statistics from recent battles all play a role in making sure matches are as equal as possible.

Will there be support for leaderboards, clans and organized tournaments?

Clans will definitely be supported since community is such a large part of games of this nature.  We want people to be able to connect with their buddies as well as forge new friendships, so implementing those measures is very important to us.  Competition is also a key aspect of Reign of Thunder so we will be incorporating plenty of opportunities to give people a chance to vie for the top spot. 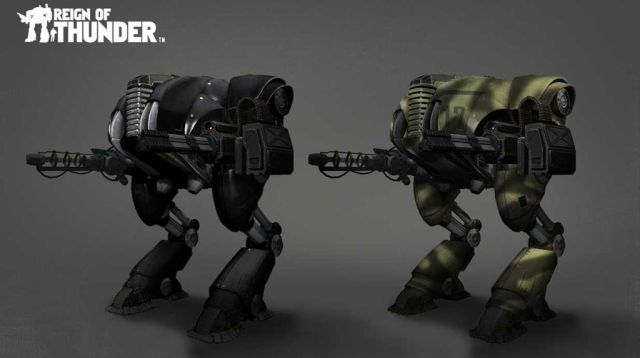 We are working on a number of different models of payment to allow consumers to pay the way they want to.  We will be publishing an article on the Reign of Thunder economy soon so I don’t want to give too much information at this point.  Of course Mechs, weapons and gadgets are a big part of it all.

What can you tell us about the game's graphics engine and its features?

Reign of Thunder is being developed on Day 1 Studios’ very own engine, Despair.  Despair is a complete development suite that allows us to control everything from graphics to level design to gameplay.  As far as graphics go, since we are developing on the PC we are able to truly take advantage of the latest hardware to create a high-fidelity online experience.

Any plans for a closed or open beta test for Reign of Thunder?

More information regarding that will be coming soon and we can’t wait until we can share those details.

Currently, do you plan to launch the game as a PC title or are there plans for other platforms?

While Despair is a multiplatform engine, at the moment we are PC only.  We are carefully specing the game and have the software solutions to make sure the transition to other platforms goes smoothly if the opportunity to do so were to arise.

What is the current launch date for Reign of Thunder?

More information regarding this will also be released down the road, but we are incredibly eager to get this game into the hands of players.

What plans does Day 1 Studios have for adding content after the launch?

We have several concepts in the works to bring players new options for factions, maps, and gametypes.  At the same time, we want to hear from the community and look forward to providing the content they are asking for.  Our goal is to continually provide an ever-evolving experience that gives players good reason to keep playing for years to come.

Finally is there anything else you want to mention about Reign of Thunder?

We’re all very excited here at Day 1 Studios to have the chance to return to the Mech genre and we can’t wait to get the game out there for people to play.