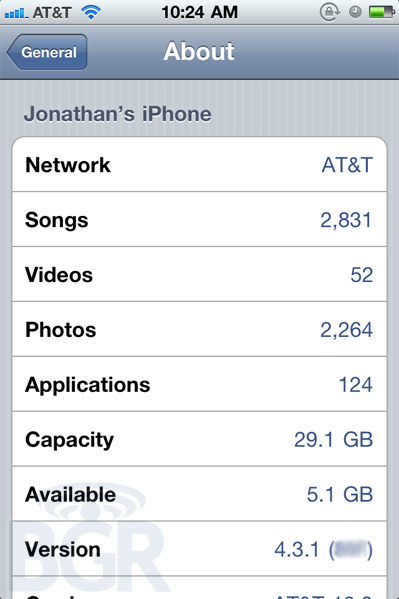 Just two days after rumours indicated Apple would release a minor iOS update within a fortnight, iOS 4.3.1 has appeared in the virtual flesh.

While details are scarce, Boy Genius Report (BGR) apparently managed to convince an Apple contact to update a reporter's iPhone to the as-yet unreleased latest version of iOS. Being a point release, iOS 4.3.1 is expected to include only bug fixes, some of which reportedly are:

Battery life was also apparently ''a tad bit better'' with iOS 4.3.1 installed, though BGR admitted their observations were far from scientific.

The update will also apparently include a fix for an iPad 2 vulnerability used by hacker Comex to jailbreak Apple's new tablet earlier this month. Comex has disputed that report and said an iOS 4.3 jailbreak has not been prevented before suggesting a vulnerability in the iPad 2 bootrom may have been discovered. A bootrom vulnerability would be impossible for Apple to fix without releasing updated hardware.

It also remains to be seen whether the Verizon iPhone will receive the 4.3.1 update. It is also unknown whether iOS 4.3.1 will include fixes for graphical corruption issues experienced by iPod touch owners, or the now-infamous daylight savings bug.

According to BGR's source, iOS 4.3.1 remains on schedule for a release within one to two weeks.