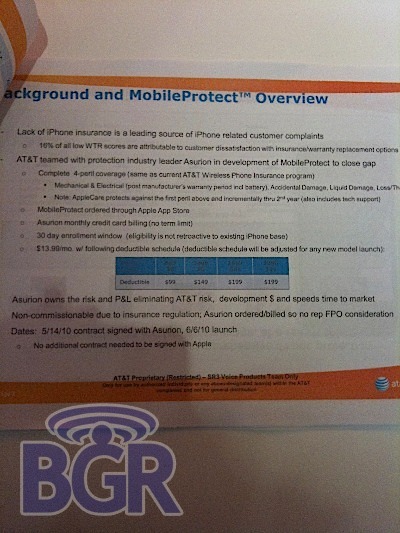 With nearly every phone on the market, as long as you're within 30 days of purchase, you can enter into an insurance plan contract for X amount of dollars a month. However, the iPhone has been a different story. Since the creation of the infamous device that changed the way the world looks at smartphones, there has yet to be a similar grade insurance plan available. With the next iteration of the iPhone, it looks like things are about to change.

As per Boy Genius Report, AT&T and Apple will be offering an iPhone insurance plan through Asurion. The cost of the plan will be a monthly recurring fee of $13.99. Dubbed MobileProtect, the plan can be purchased through the App Store within 30 days of buying your next iPhone. The plan covers accidental damage, mechanical failures, and even loss or theft. Should your phone need replacing, the deductibles would be as follows:

Should you need to cash in on this plan after your initial year warranty, you're looking at spending as much as $199 + $167.88 (monthly fee over minimun of a year) for an iPhone 3GS. That's $366.88 versus the $699 it would cost to buy the phone at cost. That doesn't seem so bad, unless you consider the fact that you can almost always buy a used one off eBay or Craig's List, allowing you to completely avoid throwing money down the drain in the event nothing harmful comes of your precious iPhone. If you opt into the plan and end up making it two years before needing it replaced, having a plan was completely pointless, as you could just sign a new two year contract and get a brand new phone for $199.

BGR sites the following as a reason for the plan's creation: "Lack of iPhone insurance is a leading source of iPhone related customer complaints." Customers also complain about lost calls and poor overall service. It will be nice to see if AT&T comes up with an app to fix that, as well. Deductible pricing for the next version of the iPhone is not mentioned. Apple is expected to announce their fourth generation iPhone on June 7th at their WWDC event.