Is that a whopping 256GB USB flash drive in your pocket or are you just happy to see me? The huge flash drive is in Kingston Technology's pocket as they are set to launch the highest capacity USB thumb drive available on the market this week, with their DataTraveler 300 device. Whether the demand for such a device exists remains to be seen.

The flash drive includes password protection functionality - through their Password Traveler software - which can protect of up to 90% of its capacity, and it is apparently enhanced for use with Windows Vista's ReadyBoost feature. Kingston state that the 256GB of storage space is equivalent to that of 10 Blu-ray discs, 54 DVDs, or 365 CDs - "that's one album for every day of the year, and it demonstrates how far flash technology has developed," says Kirsty Miller, consumer product marketing manager for Kingston Technology Europe.

If you want to fill it up and transfer 152,384 of your 5 megapixel photos to the device then the transfer speeds of it offer you 10 MB/second write speeds or 20 MB/second read speeds through USB 2.0, although USB 3.0 would seem to make more sense when handling data of this size. It is currently only available in Europe, the Far East, the Middle East and Africa and will cost about Â£565.67 (excluding VAT) for those in the UK, according to TechRadar, although Kingston say that the device is built to order only. The price includes a five year warranty and 24/7 support.

"The Kingston DataTraveler 300 is ideal for netbook users who want to extend the limited capacity of their machines," Kingston claim, presuming that people will spend a lot more on a store device than they did on their actual netbook. "It can also be used by business consumers who work with large databases, or even designers who need to transfer large graphic files from one place to another." 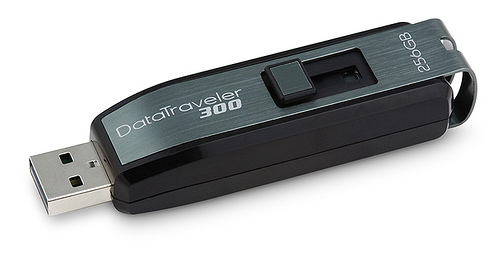