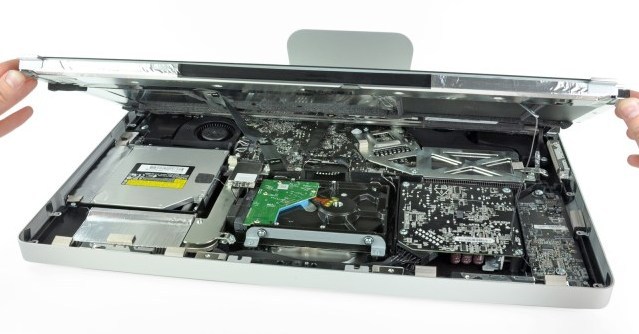 If you are an Apple fan and wonder if the latest products from the company can be taken apart and repaired if the need arises, there's nothing quite like an article that shows and talks about a teardown of such a device. The ifixit.com web site has such a article that shows just how they took apart the newest iMac release from Apple, the iMac Intel-based 21.5 inch EMC 2428. The iMac was just released by Apple on May 3.

The article goes into extensive detail on how they took apart the new all-in-one iMac which has a quad core i5 processor from Intel inside along with the Thunderbolt port. This is the new data sharing port technology that has input-output speeds of up to 10 Gpbs. The port is also a part of Apple's most recent MacBook Pro laptop. The new iMac also has four USB ports as well as a Firewire port, all found on the back of the iMac.

The teardown article first started by taking off the 21.5 inch monitor screen which exposed most of the hardware inside the all-in-one iMac. The widescreen TFT display has support for up to 1920 x 1080 for resolutions. The article also showed the WiFi card being removed along with the the 500 GB hard drive from Western Digital and the Sony Optiarc optical drive. The article also shows the iMac's logic board being removed with the writers saying, " ... you have to snake it out from the rest of the iMac -- a combination of pulling up, as well as away from the casing."

The logic board contains, among other things, the CPU and GPU and those were removed as well. The GPU is a AMD Radeon HD 6750M which means that the iMac has a mobile-based graphics solution. The Intel Core i5 CPU has a speed of 2.5 Ghz. The article states, "Thankfully the CPU and GPU on this machine have proper amounts of thermal paste applied." Overall the article rates the "repairability" of the Apple iMac Intel 21.5 inch EMC 2428 as 7 out of 10, saying that while many of the components of the product can be removed and replaced easily, "Removing the logic board is a pain" and "making the LCD and glass spotless when reassembling the machine is nearly impossible."