Lenovo's Flex 6 14 is a convertible that just doesn't seem to have any compromises. In a polycarbonate and aluminum body, it includes an eighth-gen Core i5 processor along with discrete graphics. It even comes with a Lenovo Active Pen, and it all costs $799.99.

Honestly, it seems like a great package, as a convertible with discrete graphics is rare enough, let alone one that costs under a thousand dollars. The design of the device isn't that exciting, but it seems to have everything that an average consumer could want, but at a low price.

Note that the Lenovo Flex 6 14 actually starts at $599, but this is the model that was sent to me by Lenovo.

Last week, I reviewed the Lenovo Flex 6 11, and while it's significantly lower end, it's similar in terms of looks and design. The Flex 6 14 is made of a combination of polycarbonate plastic and glass fiber, which gives it a cool feel that I would have guessed was metal. Honestly, the design is probably the least exciting part of the device.

The Flex 6 14 only comes in Onyx Black, which is actually more of a gray. It has rounded edges in the back, giving it a sleek feel for a convertible, with the display positioned at an angle on the front. 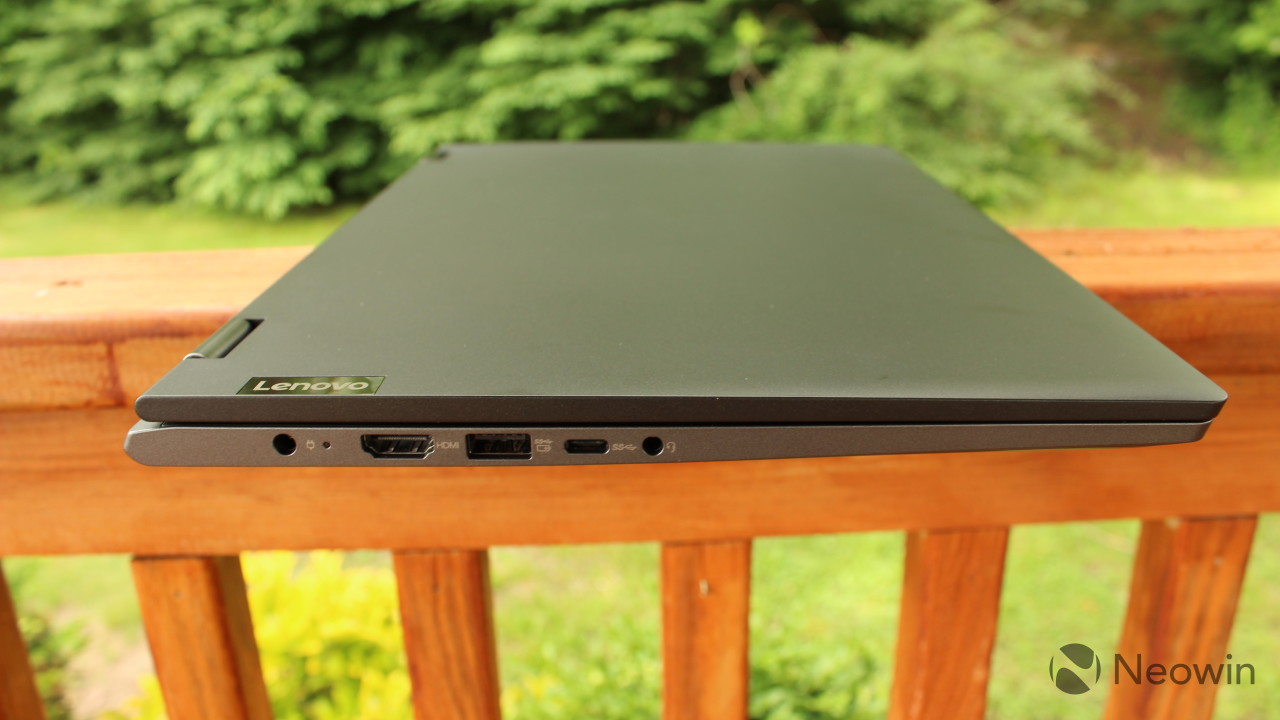 On the left side of the device, there's a port for power, HDMI, USB 3.0 Type-A, USB 3.0 Type-C, and a 3.5mm combo audio jack. Unfortunately, the USB Type-C port can't be used for charging; you'll need to use the included pin charger for that. This is always disappointing for me, since I always prefer to use the same charger with all of my devices. It's also disappointing that the port isn't Thunderbolt 3, which would allow for 40Gbps data transfer speeds. With USB 3.0, you'll just get 5Gbps. 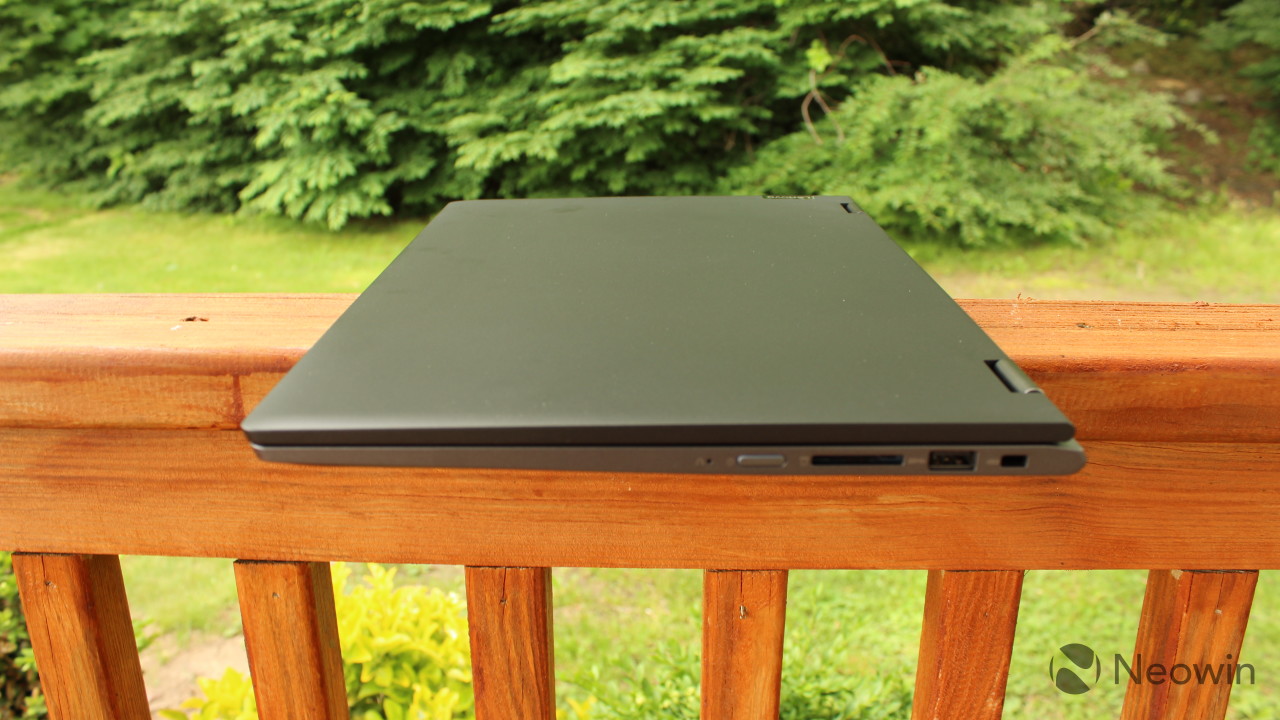 On the right side, there's a power button, SD card reader, USB 3.0 Type-A, and a Kensington Lock slot. Personally, I do think that two Type-A ports and one Type-C port is a good combination, although it would be nice if the Type-C port supported charging.

One thing that I would have liked to have seen is a physical volume rocker on the side of the device. Some companies, like HP and Microsoft, include this on convertibles, and to me it makes sense since you'll be using it as a tablet some of the time. Unfortunately, you'll be stuck using the onscreen controls when using it in tablet mode.

The palm rest area around the keyboard is made of brushed aluminum, which gives it a premium feel. If this was a clamshell, you'd find the power button on the keyboard, but that's not the case. To the bottom-right of the keys is a fingerprint sensor for Windows Hello, and underneath the spacebar is a clickable touchpad, which doesn't include any physical buttons like you'd find on ThinkPads. 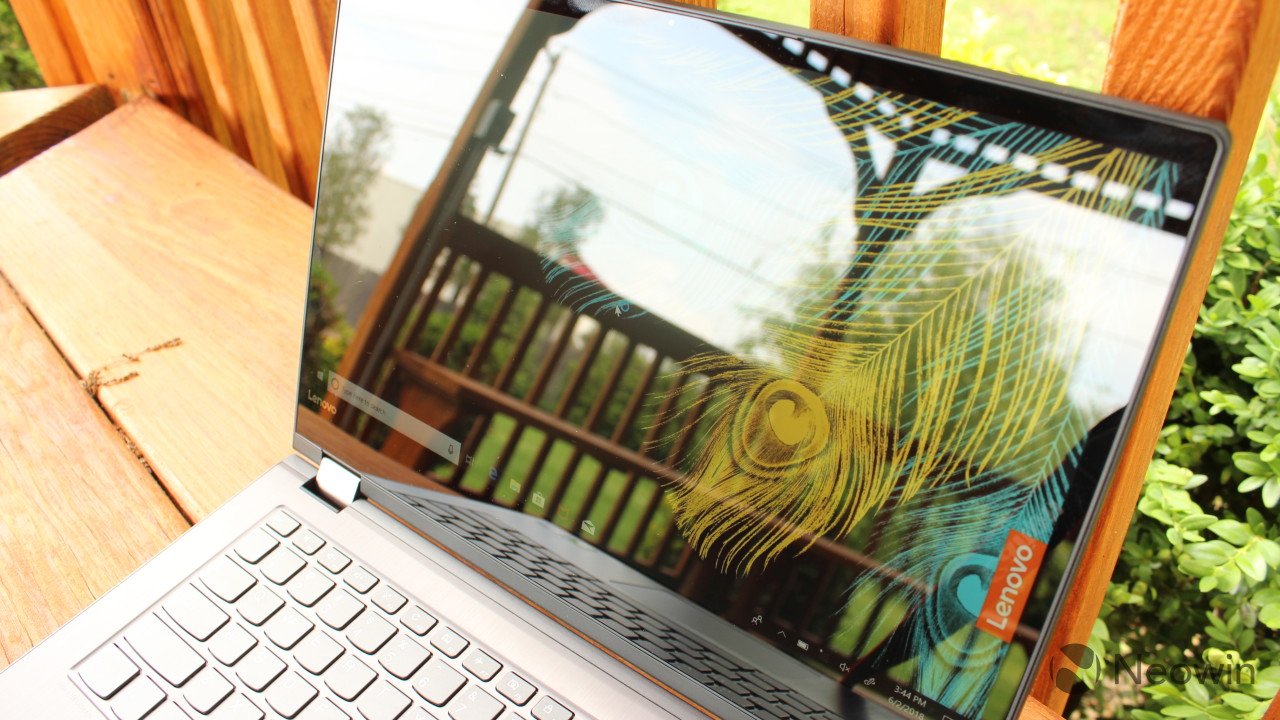 As you can see from the image above, it doesn't fare too well in direct sunlight. It's very glossy and reflective, and turning it up to maximum brightness doesn't help matters too much. Indoors, the display looks lovely, with rich and vibrant colors.

I think it would be nice if the Flex 6 14 was offered in a 4K option, or even 1440p, although that would probably raise the price beyond where Lenovo is positioning this unit. 4K would drain the battery life as well, but sometimes I feel like 1080p on a 14-inch screen just isn't enough.

As you'd expect from a convertible, it supports 10-point multitouch, and there's even pen support, which is pretty good at this price. What's even better is that the PC even comes with the pen, which is even better considering the price point, and the fact that there are minimal sacrifices to be made on this machine.

The keyboard on the Lenovo Flex 6 14 is the standard Lenovo keyboard that you'd expect to find on a consumer model. The keys are more shallow than on a ThinkPad, and there's no TrackPoint or physical buttons above the touchpad. 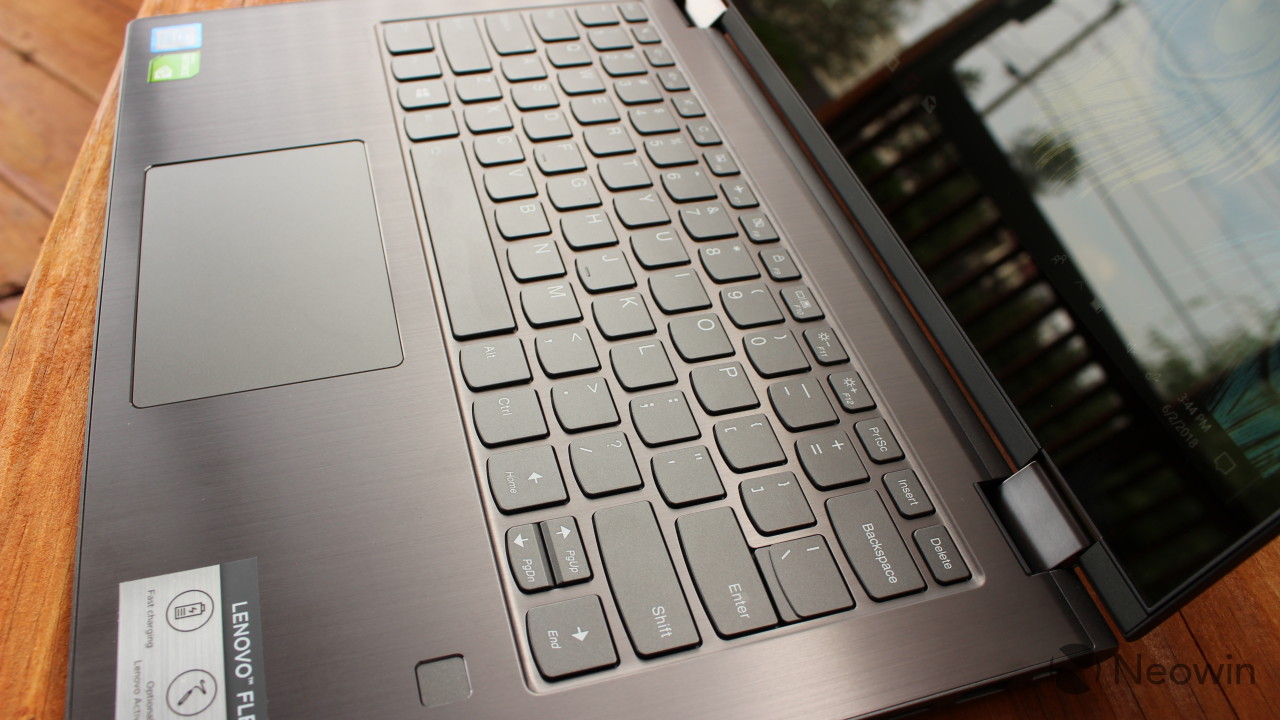 That being said, the keyboard is comfortable to type on. The keys are more shallow but they're responsive. And when I say shallow, it's not the bad kind of shallow like with Apple's MacBook Pro. This one is actually comfortable, and it's still one of the better keyboards around.

Below the keyboard is a clickable trackpad, which is pretty standard. I appreciate its large size, but I wouldn't say that it's any better or worse than the average Windows 10 laptop, which is fine. 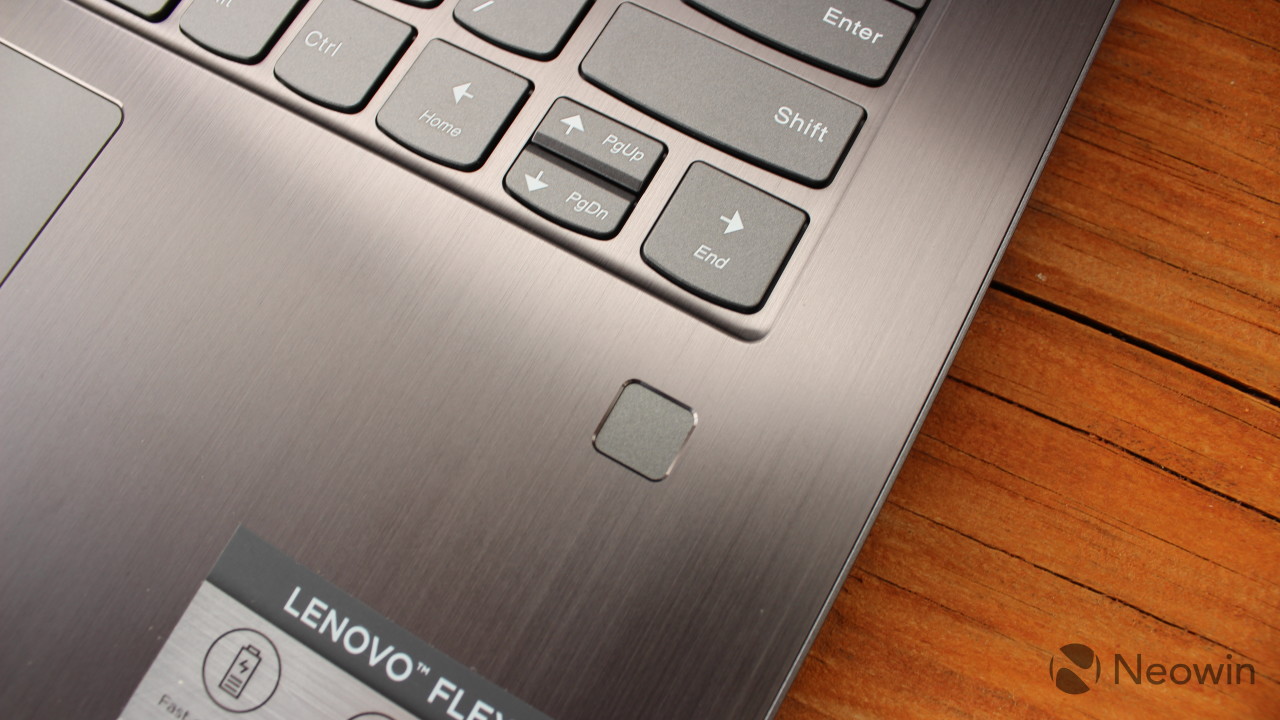 It's worth pointing out the form factor, because this isn't just a laptop; it's a convertible with a 360-degree hinge. That means that you can use it in a variety of different ways, including as a laptop, a tablet, and anything in between.

And it comes with a pen as well, which clips on via an attachment that plugs into a USB Type-A port. Personally, I'm not a fan of this method, as it takes up a USB port, but there are worse ways of storing a pen. 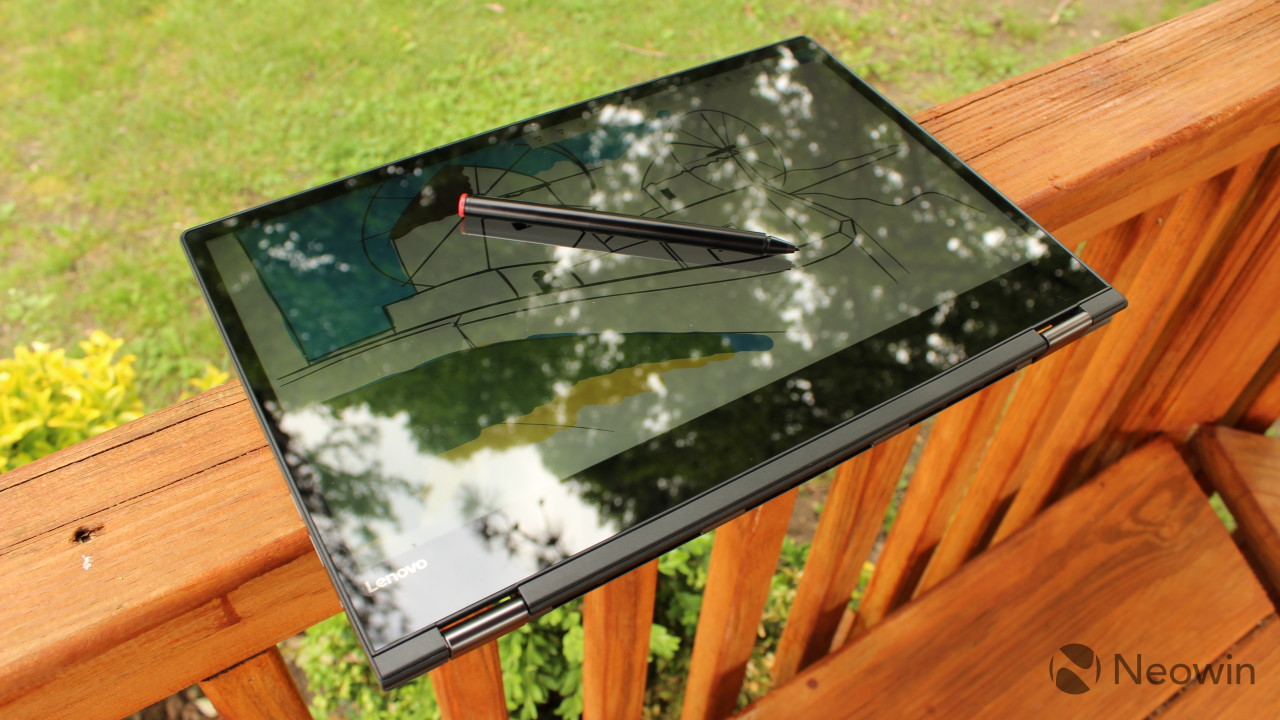 Tablet mode means that you can use it to draw, take handwritten notes in OneNote, draw routes in Maps, mark up images in Photos, mark up PDFs and webpages in Edge, and much more. Windows 10 isn't a great tablet operating system; in fact, it's one of the worst, but when it comes to pen support, it's definitely among the best. 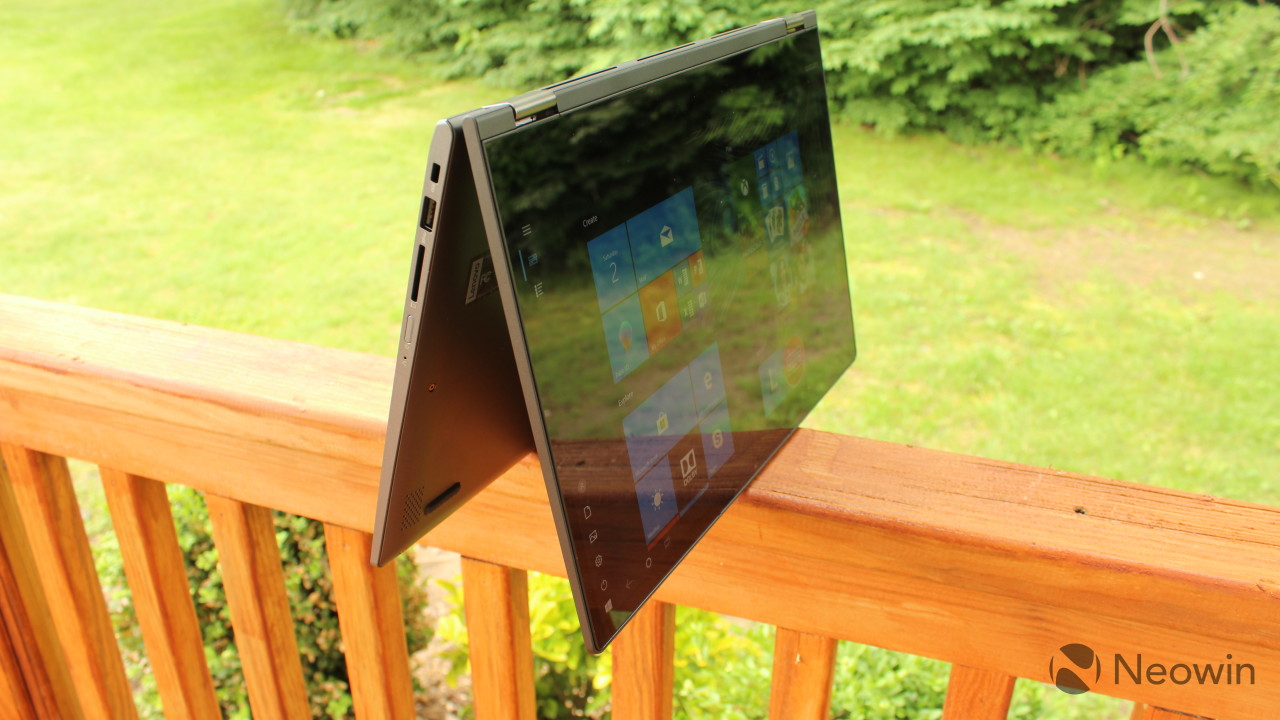 And then there's tent mode, which is pretty self-explanatory. This can be great for watching movies and TV shows with the Netflix and Hulu apps that are available in the Microsoft Store. It can also be great in the kitchen, as there's no surface that's directly facing the counter, which might be dirty. That's just me speaking from personal experience. 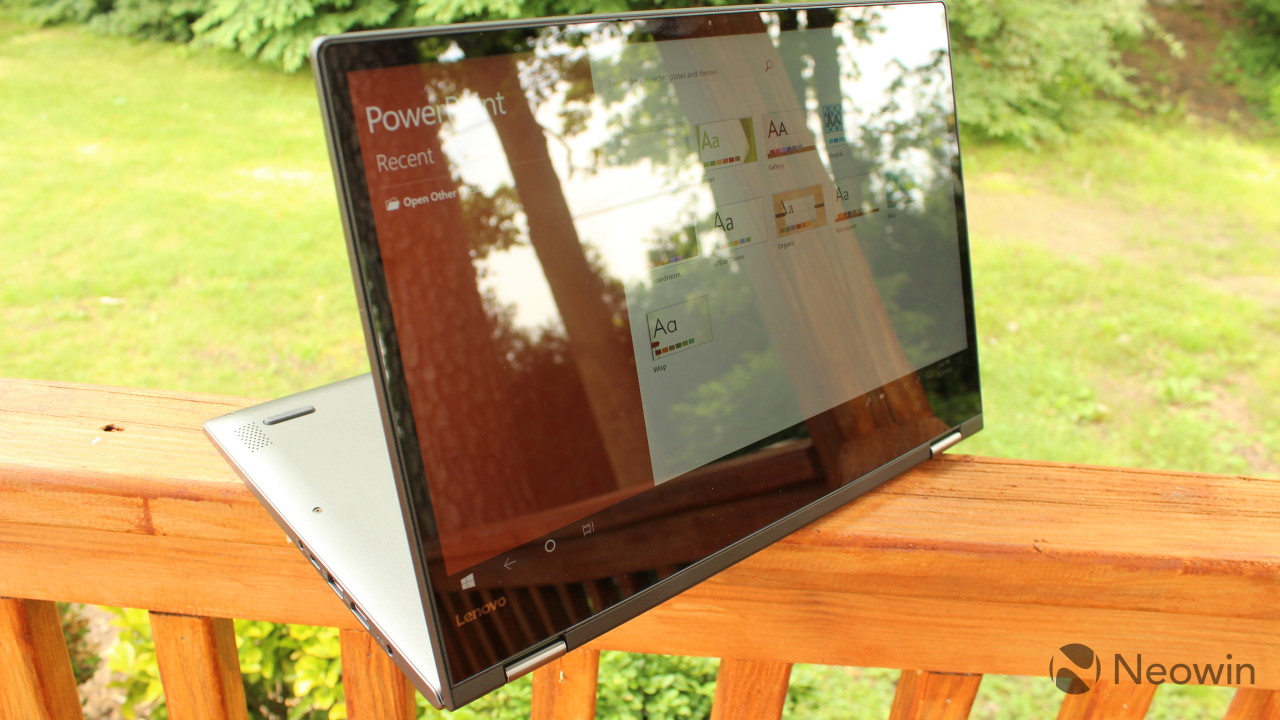 And then there's presentation mode, which is great for, you guessed it, presentations. This is where the keyboard is face down, and this can be great for watching movies as well.

I personally prefer that convertible form factor, as you just get so much extra functionality out of it. Clamshell laptops do tend to have a bit more power, but don't forget that the Flex 6 14 has a dedicated GPU.

The Flex 6 14 comes with an Intel Core i5-8250U processor along with 8GB RAM, which is solid for the mid-range. Really, 8GB is the minimum amount of RAM you should want in a new PC. The eighth-gen U-series processors are now quad-core, which means that you'll get significantly more power than you would with the seventh-gen dual-core chips.

For general work, I found this device to be great. That includes using Chrome with multiple tabs open, Skype, OneNote, and Slack at the same time. On top of that, there's the occasional Photoshop, Illustrator, Acrobat, and Premiere Pro. Don't let the dedicated GPU fool you though. This machine is not for gaming or video editing, although you could probably do either in a pinch.

For benchmarks, I used PCMark 8, which provides three tests: Home, Creative, and Work. First up is Home, which checks common tasks like video chat, web browsing, casual gaming, and more.

As you can see, the Flex 6 14 scores pretty well on the Home test, just like you'd expect. After all, the hardware is pretty premium here, considering the price. Next up is the Creative test, which checks more GPU-intensive tasks like mainstream gaming and video editing. 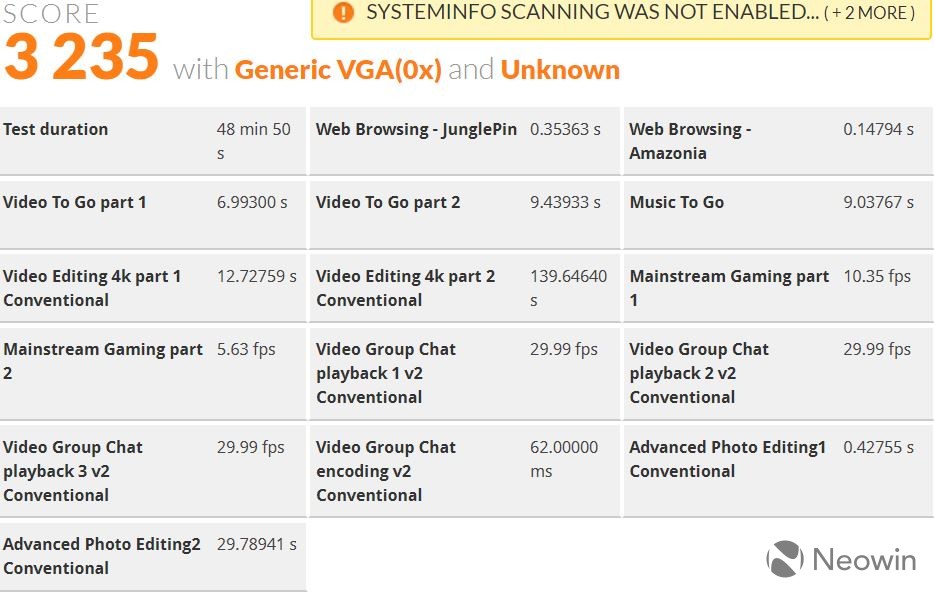 The Flex 6 14 scored about the same on the Creative test, which is fine. Remember, the MX130 is one of the weakest dedicated GPUs out there. The main benefit is that there's an edge over integrated graphics, but it still won't take you very far. Finally, the Work test checks productivity-related tasks like writing and spreadsheets.

Unsurprisingly, this product shines on the Work test. After all, it has the hardware to be engineered for productivity.

If you're looking for a great Windows 10 PC and you're looking to spend under $1,000, I really can't think of anything better than the Lenovo Flex 6 14. It's really the best you can get at its price point of $799. 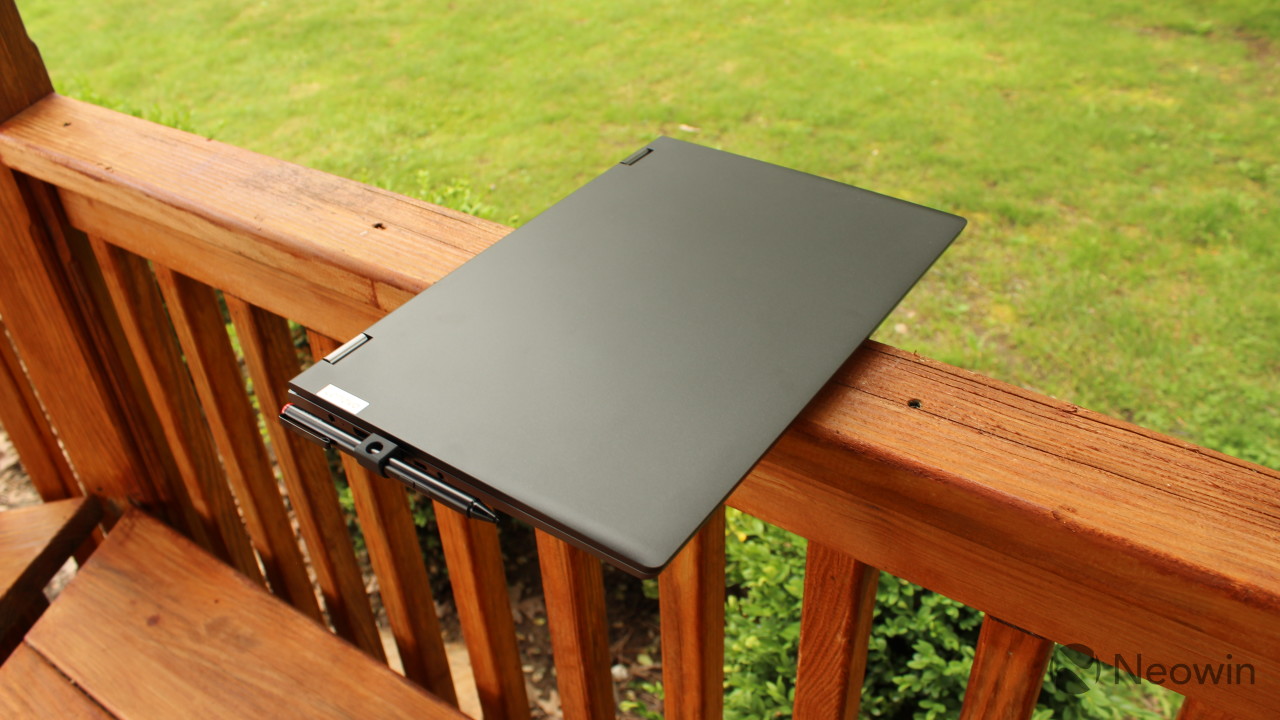 Obviously, it's not perfect. There's no option to upgrade to a Core i7, or a higher resolution display, and you don't get facial recognition. After all, it's still an $800 convertible.

And it's quite a convertible, with a quad-core Core i5 processor, a 2GB dedicated GPU, 8GB RAM, an included pen, and the convertible form factor. Truthfully, if this doesn't meet your needs at its price point, then you're going to need to spend more money on your new PC.