We are now just hours away from Samsung's official reveal of its Galaxy S IV smartphone, via a press event in New York City. Samsung is also cooking up something in Times Square at the same time but rival smartphone maker LG happens to be launching its own campaign that mocks the one Samsung has for its next Galaxy S device. 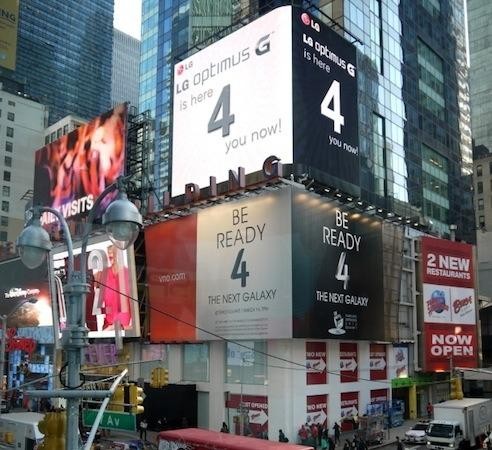 LG's Korean press release reveals that LG's Times Square billboard, which has been in that same location for 20 years, is sitting on top of Samsung's billboard, which was just put in place in 2012. When Samsung changed the billboard for its teaser ad, "Be Ready 4 The Next Galaxy", LG quickly put up its own ad with the same basic design, but with the worlds "LG Optimus G is here 4 you now."

It's a clever bit of marketing, and we think it's actually cool that LG thought of this, but it's going to take more than just a mocking billboard in New York City to get people to switch over from Samsung to LG. Just a reminder, the Samsung Galaxy S IV press conference starts at 7 pm Eastern Time and it will be livestreamed on Samsung Mobile's YouTube page.