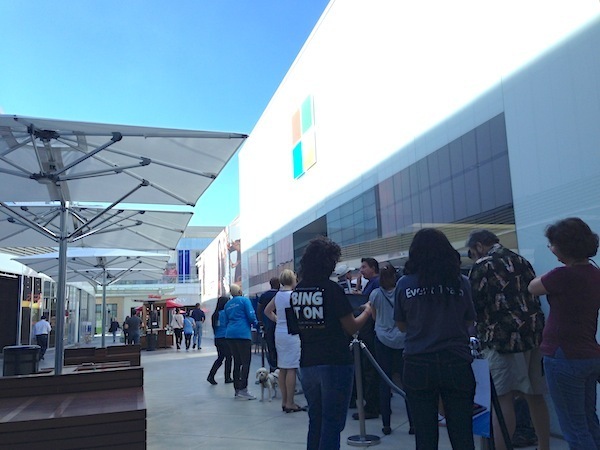 It's been over two days since Microsoft officially launched its Surface tablet in its Microsoft Stores, starting with the opening of the new Times Square location on Thursday night. Reports have since come in that there were lines in front of a number of Microsoft Store locations in the US on Friday morning as people eagerly waited to go inside to buy the Windows RT-based device.

News.com reports that there were lengthy lines on Friday at the Los Angeles Microsoft Store, located in the Century City neighborhood. The report states, "Customers had lots of questions about Surface and some sat there for 30 minutes or even an hour kicking the tires (or, in this case, pounding on the 3mm keyboard). If Microsoft can maintain that kind of enthusiasm, it has a chance to make a run at the iPad and MacBook."

It's not a shock to learn that the Seattle Microsoft Store also had a long line in front of it for Friday's Surface launch. Microsoft is based in nearby Redmond and the report claims that the line contained a number of people who were somehow linked with the company.

Even some of the small and temporary holiday pop-up Microsoft Store locations had lines of people waiting on Friday to buy the Surface tablet. Cleveland.com reports that the pop-up store at the Beachwood Place mall in Cleveland, Ohio had 52 people waiting in line before the store opened at 10 am that day.

It's likely that many of the folks waiting in line were encouraged to get up early thanks to Microsoft's offer of a free year of its new Xbox Music Pass streaming service for the first 100 people who bought the tablet at each of their stores. The pass normally would cost $99.90.