Kotaku reports that the Xbox Live account of Larry Hyrb, director of programming for Xbox Live, was hacked late last night. Known as 'Major Nelson', Hyrb is an influential industry leader in the gaming world, with one of the first widely followed podcasts and informative insider blogs from a gaming executive giving readers and listeners an inside look at the goings-on at Xbox headquarters in Redmond. He was part of the Xbox 360 launch team, and he's known better by his gamertag (Major Nelson) than by his real name. 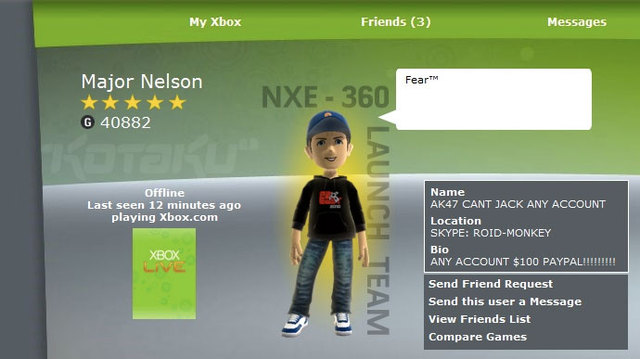 The messages appearing in his Name, Location, and Bio fields have varied overnight, and some have been a tad NSFW, but many of them are just advertising for the same hacking services on any account for a flat fee.

Hyrb has since taken control of the account with the help of the Xbox Live enforcement team. Stephen Toulouse, director of Policy and Enforcement for Xbox Live, is investigating the matter and claims that the attack was specific and specifically targeted to Hyrb's account.

Whether or not this means that XBL users should be worried about the security of their accounts is still up in the air. Toulouse is still investigating the attack, but lightzz.com has come out and taken responsibility, posting a Youtube video demonstration and offering the service for $60 (USD).

UPDATE: Due to the very public nature of the perpetrator's self-advertisement on YouTube, it has been quickly determined that the owner of the domain lightzz.com, Yasiel Rodriguez of Miami, FL, was most likely the orchestrator of the hijacking.