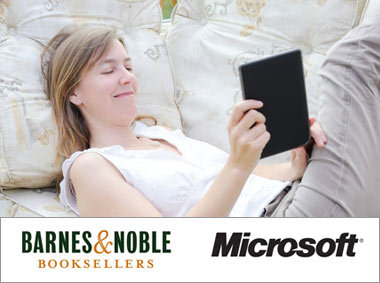 Microsoft has announced a major new partnership with bookseller Barnes & Noble that will see the company's Nook tablet and eReader business spun off to form a new company. The press release reveals that Microsoft will invest $300 million in the new venture which will give it a 17.6 percent stake in the company.

This new organization does not yet have a name, but for the moment it is being referred to by the working title Newco. The entire business, which will also include Barnes & Noble's College division, will be worth about $1.7 billion. Microsoft said one of the first things that will come out of this partnership will be a Nook application for Windows 8.

The shift to digital is putting the world’s libraries and newsstands in the palm of every person’s hand, and is the beginning of a journey that will impact how people read, interact with, and enjoy new forms of content. Our complementary assets will accelerate e-reading innovation across a broad range of Windows devices, enabling people to not just read stories, but to be part of them. We’re at the cusp of a revolution in reading.

This move by Microsoft puts the company in more direct competition with Amazon's Kindle business as well as Apple's iBook division.

The press release does state near the end that it is not 100 percent guaranteed that Barnes & Noble will actually spin off its Nook business, stating, "There can be no assurance that the review will result in a strategic separation or the creation of a stand-alone public company, and there is no set timetable for this review."