With the World Cup fast approaching, fans of football (or soccer, if you prefer) across the globe are looking forward to the tournament with bated breath. Microsoft sent a bit of love down to Brazil last month with the launch of the Lumia 630 there, which includes integrated digital TV - a feature not available on the 630 anywhere else in the world - allowing Brazilian fans to watch every match, wherever they may be in the country.

Keen to spread the love a little further, Microsoft's Internet Explorer team has joined forces with ESPN to launch a new online hub for the 2014 World Cup. The new ESPN FC World Cup Essentials site features exclusive content to ensure that even the keenest football fans are on the ball when it comes to the latest news from the tournament, along with national team profiles and backgrounds, and even a look back through the history of the World Cup. 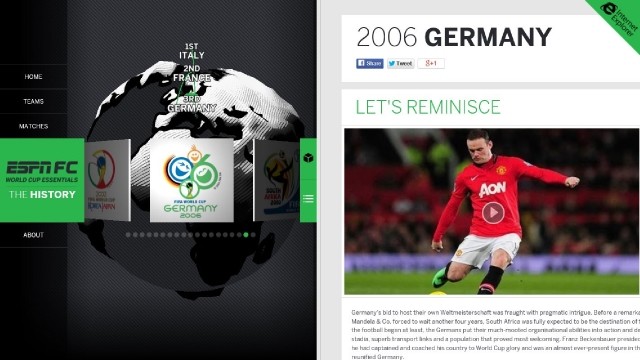 The site also acts as a showcase for the best touch-first web experiences in Internet Explorer 11, and with responsive web design, it will scale to any size of device, from a phone or mini-tablet, all the way up to a full-sized desktop display. All of the expected touch interface paradigms are in place, including pan, tap and pinch-to-zoom, which are put to particularly good use in features such as the 3D globe that allows users to navigate through some of the best moments in World Cup history.

The ESPN FC World Cup Essentials site is intended to be a dynamic and diverse resource of the most useful and interesting content from across the tournament. Visitors get access to World Cup headlines, schedules, team information and other content from ESPN, including special features, video highlights, polls and pundit predictions and insights. Exclusive artwork of players and teams is also available, and OneDrive integration allows users to easily download and save this content in the cloud.

The site was developed to adhere to the latest HTML5 standards, and includes CSS3 animations, transitions and 3D transforms, along with WebGL with Three.js for 3D navigation, and Pointer Events to provide what Microsoft believes is the best interaction experience across touch, mouse and pen inputs. 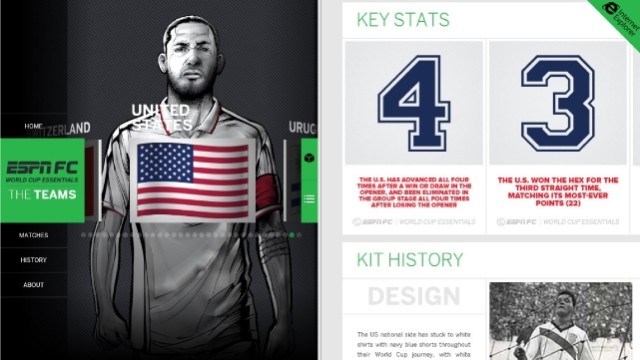 The new site is the latest example of Microsoft's 'Rethink IE' initiative to show off the capabilities of Internet Explorer, although the site will also work in other modern browsers. Last month, Microsoft joined forces with Ubisoft in another example of Rethink IE in action, to create a demo of Assassin's Creed that can run in the browser.